WIGAN ATHLETIC OWNER owner Dave Whelan said with a straight face last week that his comments about Liverpool’s Ian Ayre’s challenging of the way the premiership money pie is divvied up, was not motivated by his own club’s financial interests but ‘for the good of football’.

God love him. What a saint. A genuine altruist in an age of avarice and excess. Dave Whelan, in truth a 19th century style Conservative Patrician philanthropist rather than just the Tory shitbag he comes across as. Who knew?

One might surmise that he actually takes the majority of the £40m plus Wigan so deservedly earn from the sale of their TV rights to their legions of fans, at home and abroad, and gives it to foreign aid funds. He probably secretly works in the evenings helping out in soup kitchens, and that’s after a hard day managing the build of his new academy for orphans.

Nah, not having it. Whelan, you are a lying two faced wanker. You are a greedy porcine capitalist, who is motivated by the maximisation of the value of your asset, namely, your shares in Wigan Athletic Football club. If there was a way Wigan could earn more green-backs than the rest you would surely take it.

One would think Ian Ayre had advocated bringing back the poll tax or pay rises for bankers, such was the broad spectrum outcry at his call last week for a debate on the wisdom of the current share out of the £1.4billion that the Premier League earns by selling rights to watch its matches abroad.

In the face of such a naked display of corporate greed, every man, woman and journalist turned into a red under the bed, and proclaimed their collectivist credentials. Ayre’s grotesque materialism was too much to bear for football club owners and righteous scribes the nation over. Amidst this maelstrom of anti-capitalist outrage it was hard to imagine how Cameron’s crew actually managed to get elected in a country where even all the major football club top brass and football journalists are, as it turns out, dyed in the wool Clause 4 loving, red flag flying, bona fide socialists.

Balls to them. Hypocrites all. Ian Ayre had a cast iron right to make the point he made, and seek the resolution he sought. Of course, conversely, the Premiership’s great unwashed (Bolton, Wigan et al.) also have the right to use their vetoes and thwart Liverpool FC and Ayre. The likes of Whelan need only have countered with ‘nice try, Ian ‘ol son, but you surely don’t expect us to let you get some of our dough?’ That would have been all fair in love and TV rights deals.

In opining on Ayre’s statement, Whelan was an interested party. His interest was conflicted, in fact. He and Wigan Athletic had money to lose by way of Ayre’s proposal. Fine and dandy, in theory, that he and his ilk should stick up for themselves and stick fingers up at LFC. That was their prerogative.

That ain’t the problem. It is the hiding behind the pious stance that rankles. Whelan would have us believe that the likes of Wigan will fight to hang on to their readies for dear life, not for their own sakes, let us be reassured, but for the greater good of soccer paupers everywhere. For the little guy. For the meek, who don’t want to inherit the earth, but sure as hell see the benefits of an even stevens share out of the Premierships foreign TV rights bounty.

Liverpool MD Ayre, to his credit, made no bones about the fact that he was also just batting his club’s cause. He also attempted a rationale whereby his ‘enlightened self interest’ may actually yield greater dividends for the wider Premiership family. His argument, although clearly motivated by LFC’s agenda, is not without merit. At the very least, there’s a debate to be had. That is, after all, all that Ayre was proposing.

That gargantuan galoot Martin ‘Bluto’ Samuel countered Ayre at length in his column in that credibility enhancing organ, the Daily *fucking* Mail. Big Samuel argued that the reason fans from Shanghai to Sri Lanka are such big premiership buffs is because they just ‘love it’ that in blighty’s bestest league in the world that a Wolves can beat a Manchester United or that a Nottingham Forest can win the league.

Well, Martin, they can’t. Not anymore, and it’s been that way for quite some time now. Also, during the period in which the strong have gotten richer and stronger, and the contests less egalitarian, so too has the stock of the Premiership brand risen, and risen exponentially. Fans in Thailand and China like the Premiership because they get to see the world’s best there. The shiniest stars in football heaven. There is no correlation between broad premiership competitiveness (where David’s frequently vanquish Goliaths) and viewing figures from the east.

Ian Ayre’s point was that in theory the collective deal relatively disadvantages England’s top clubs in relation to their European competitors, in particularly the Spanish power houses. If they negotiate better and wealthier singular deals they will have the bigger turnovers and in turn the greater pulling power for the best players .

The Premiership became stronger as an overall entity when its rich got richer. That may be a sad indictment of something out there in the natural justice ether, but it is definitely true. World class players did not migrate to the premiership in droves because of the thrill of the contest that the likes of Bolton and Blackburn occasionally bring to the table.

They came because England’s elite had become minted. They came for the obscene riches on offer, and stayed because of the ‘virtuous’ economic cycle that then ensued. i.e. as the big clubs got richer and attracted the better players , they in turn enhanced the quality of the league, which in turn became a more valuable commodity to market at home and abroad, and the clubs then got richer still, and the players pay packets kept on growing.

Ayre is simply identifying that the Premiership’s biggest assets are its big guns. What the likes of Whelan aren’t getting or acknowledging is that growth in wealth for the elite has not insubstantial benefit to their poorer cousins. For one, the rich have to spend their money somewhere and how better (for the Wigans) than to spend it on increasingly exalted fees for the likes of Charles Nzogbia or Hugo Rodallega.

In short – what is good for the big boys is good for the league. There is no moral argument to be had here. This is about money and how all concerned go about maximising their cut of it. The fact that Premiership TV dough is apportioned equally has no foundation in logic or commercial reality. It is simply because the premier league historically deemed that it should be so, and in an era before clubs were investing heavily in enhancing their appeal abroad. 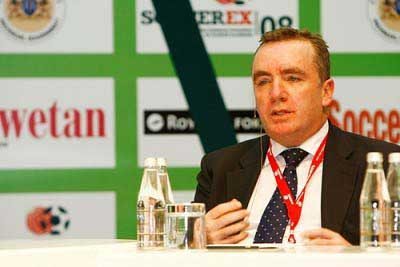 rights abroad to the larger clubs. It was an entirely arbitrary statement of parity. Why didn’t Rick Parry and the League’s founding fathers also insist that all gate monies and commercial revenues be pooled too, and shared out between all 19 teams ? The logic for that is no less applicable than for the TV money split.

The alternative, more sanguine, argument against Ian Ayre’s suggestion was flagged by Wigan manager Roberto Martinez amongst others. He cited the Spanish experience, where big City giants Barcelona and Real Madrid are free to sell their TV rights abroad without regard to the collective.

The claim is that the lack of competitiveness in the Spanish league is proof positive of the dangers of enrichening the rich and widening the gap. The truth bears closer examination however. Real and Barca have only real been off into the sunset for the past two seasons. Two seasons in which, a relatively inexpensively assembled Barca team has not just dominated its own league, but also European football in general. Therefore, that alleged ‘lack of competitiveness’ at home is hardly blunting Barca in wider competition.

Moreover, the financially more egalitarian English Premiership has been won by just two sides (Chelsea and Man United) for as long as many of us can recall. In fact, the last times those two weren’t winning our league, neither were Spain’s top two, during the era in which Valencia won two titles between 2002 and 2004.

Until Ian Ayre pipped up, there weren’t too many cries about the supposed paucity of the Spanish competition. More commentators were taking about the emergence of newly monied Malaga and resilient Valencia. The success of the Spanish national side was being seen as a barometer for a very healthy domestic competition.
The perceived breadth of the EPL’s competition is not the product of an equally shared foreign TV rights deal. 10 years ago it was a singular contest between Manchester United and Arsenal. Now, thanks not to equal TV splits, but heavy investment from abroad, the names of Chelsea, Manchester City and even possibly Liverpool have come into the frame.

Not all of these clubs could traditionally have counted upon benefitting from support beyond UK shores. Certainly not Manchester City or Chelsea. Time and the acquisition of legendary players is changing that.
We may all instinctively wince at the notion of praising the impact of Roman Abramovich and Sheikh Mansour on the EPL, but the fact remains that their tasteless investment levels have boosted the game, the competition and the standing of the league. Likewise Ayre and Liverpool’s admittedly shameless attempt to reallocate of foreign TV rights monies may similarly provide a financial steroid to boost traditionally marketable UK clubs abroad such as Liverpool, Man Utd, Arsenal and possibly Tottenham.

Ultimately, if and when the hard analysing gets done it turns out that yes, the foreign appetite for English football is all about the dynamic of the contests between giant and minnow and the appeal of diversity, then that’s fine. Sure as day follows night, an intelligent man like Ian Ayre would then stand down from the rostrum and accept he got one wrong.

All he wants thus far is a sensible debate on an important subject in football. Those that don’t and are (disingenuously) hiding behind dewy eyed romanticising of the English game are not inherently serving its best interests. Nor, Dave Whelan, are you necessarily serving your clubs and shareholders best.

In 10 years time if world Football’s rich list includes half the number of English clubs in its top 10 or 20 than it currently does, then the quality of player will be lower in our league, and higher in rival leagues. The stock of those leagues in terms of TV audiences will be greater. The likes of Wigan will still be getting their equal share of the English cake, but it will be a share that may well be significantly smaller in quantum and less financially rewarding because the English premiership isn’t the power house it once was.