AYRE ON A SHOE STRING? 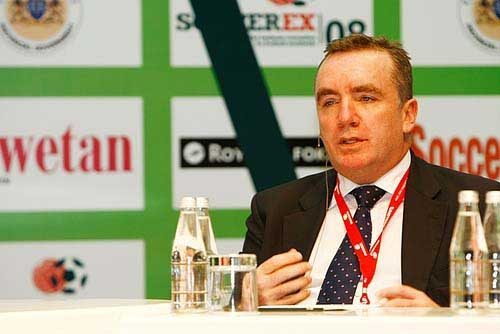 THERE was a time not so long ago when just about every bit of negative news emanating from Liverpool football club was attributed to the alleged incompetence of one man: Mr Rick Parry.

From being the powerhouse of English domestic and European football, the stewardship of Parry and his predecessors under the ownership of Moores is regularly held up as the root cause of Liverpool’s strategic slippage against our major domestic and European rivals since the time Kenny was last at the helm.

Oh how we fantasised about our club having been run along the lines of Manchester United – a commercial juggernaut whose strategic nous saw it compound its growth both on and off the pitch to become the kind of superpower we ourselves had been but a decade or two before.

Oh how we wished we’d been ruthless, and marketed our wares better in foreign markets, and really squeezed the value of our club worldwide to strengthen our competitive position as a club.

Fast forward but a few years, and we find ourselves with guess what? Owners and executive decision makers at the club dedicated to the active pursuit and exploitation of whatever competitive advantage they can find. But here we are, having got what we wished for, wringing our hands over whether we really want it or not.

For example, look at Ian Ayre’s clear briefing the other day suggesting Liverpool would moot the question of independently negotiated TV deals, rather than the collective deals that currently do such a good job of equitably distributing Premier League revenues among its participants. Is it borne of flagrant disregard for the club’s cultural principles? Or is it the natural product of ambition and fiduciary duty?

And is it really anything new?

Read the forums or scan your Twitter timeline and you’ll quickly gauge the gut feeling from the more expressive of the Liverpool fans. It’s unacceptable. It’s not The Liverpool Way. It’s selfish, and Shankly would undoubtedly turn in his grave. That’s the general flavour, in amongst some informative and reasoned debate. And I’m not challenging that view. What I would challenge, however, is why things are so different now, when we’ve been tacitly agreeing to just this kind of thing for nigh on 20 years, inept commercial stewardship notwithstanding.

Whether we like it or not, Liverpool were a big part of founding the Premier League all those years ago. A new league that, in large part, was set up to collect the spoils from the game and cut adrift the clubs in the lower reaches of English Football.

Whether we like it or not, Liverpool were a founder member of the G14, the group instrumental in setting up things like the Champions League, and whose lobbying gravitas currently has UEFA sweating in their collective lederhosen. A group that, in large part, was set up to collect the spoils from the game and cut adrift the clubs in the lower reaches and divisions of European football.

Like it or not, we’ve been severing these kind of ties for a long time already. A year ago we were on the brink of the abyss against the backdrop of unprecedented competitive pressure. Now we have a chance of exploring our options and flexing our commercial muscles. And we’re not sure we like it.

Manchester City are funded to a level unprecedented in world football, and you can bet they’ll do whatever they can to circumvent the UEFA FFP rules to as great an extent as they can, and others will follow. Will UEFA bark or bite? Well, that’s the game of call my bluff we’re faced with in the medium term. The houses of cards that stand at the top of the game are ripe for challenge, and there’s no shortage of precedent to demonstrate the appetite for that challenge. It wasn’t so long ago that papers were reporting the threat of a G14 revolt, and we know these clubs have long been putting pressure on UEFA to cede to their interests.

So should UEFA hold some sway over what are, after all, huge commercial enterprises with enormous global commercial appeal? And while the likes of Manchester City and Real Madrid receive unprecedented subsidy, are their rivals supposed to sit back and not try to exploit their competitive advantages? Wouldn’t doing so neglect the fiduciary duties of those at their helms?

It’s inexorable this. And it comes down to whether you think Liverpool should be on the bus or off it. Ian Ayre evidently thinks we should be driving it. Some feel he’s just parroting the wishes of his owners, but I think that does him an injustice – he’s ambitious and he’s driven and he loves his club. I suspect a great many of us would do the exactly the same thing if we were in his position.

I honestly believe that if those big clubs want something, it’ll eventually happen. You can only hope Liverpool retains its roots in its community during the process, no?

The G14 are spoiling for this fight on the European front and have been for a long time, including ourselves, and it long predates this announcement and the tenure of our current ownership. It originates from the days before even Rick Parry. When the PL and the CL happened, evidently we were all looking the other way, such is our surprise at what’s happening now.

Is it a case of be careful what you wish for? Is it inexorable? Should we forever lap at the shores of footballing domination in favour of values we’ve already demonstrably overlooked?

There aren’t many easy answers, are there?