KENNY SHOULD JUST TELL THEM ALL TO ‘FUCK OFF’

MATT HUGHES of the Times, this week, became the latest journalist, from a growing chorus, to sing from the roof tops about his discontent at Kenny Dalglish’s handling of the British press. He states in his column with unrestrained pomposity :

In a recent Anfield Wrap podcast, Rory Smith (soon to be of the Independent) astutely observed that the younger generation of hacks covering Liverpool are not at all attuned to Kenny Dalglish’s modus operandi or attitude towards the media. Matt Hughes’s piece seems endemic of this.

Back in Kenny’s day football reporters wrote reports of football matches, and football managers managed their teams. From Kenny’s perspective, it may well be a Premier league stipulation that coaches have to give of themselves on certain set occasions within the football calendar, but he darn well doesn’t have to like it.

Here’s the thing Matt Hughes of the Times – the reason you are not sensing any love or respect from Kenny Dalglish is simply because he doesn’t like you. Or respect you. Well, certainly not within the context of him attempting to do his job properly.

The UK football media has grown more self important with each passing decade. Sky’s raising of football’s profile has concurrently given 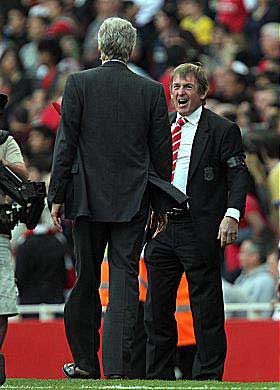 freer reign to the beast that is the journalistic ego. The sport’s media have become increasingly self referential (see Sky’s ‘The Sunday Supplement’ as a case in point) and what used to be a plague only on England managers, is now visited on the club coaches as well.

Matt Hughes’ ego tells him that he is performing a public service by grilling a manager as to his transfer targets or potential team selection. His breed of journalist feel they are providing THE crucial communicative link between the sport, as entertainment, and its information hungry audience. His ilk will comment on Sunday Supplement style shows about how good or bad a manager ‘is with us’. He and they believe that their judgement of a managers media performance is important.

They are wrong. They are not required. Football is the world’s biggest sport precisely because it is not merely entertainment. There is nothing remotely entertaining about going to support Liverpool take on, say, Manchester United. It is a painful, stressful experience from start to finish occasionally punctuated by moments of ecstasy or despair. Entertainment is something else. It isn’t football.

As a fan I may be so anxious and concerned with an impending fixture that I’m desirous of every titbit of inside information on anything that may effect that game, but that doesn’t mean I feel , despite being ‘a paying customer’, that I am entitled to it. Those demands are the preserve of the neutral or the post Sky revolution ‘soccer fan’. This animal is sated not by being present at the event itself, but feeling he/she has to sample the ‘weigh in’ type circus rendered entertainment by the likes of Jose Mourinho, and lapped up by the newer breed of football journalist.

Jose is a master of the modern juxtaposition between sport and media. He has a ‘if you can’t beat ‘em, join ‘em’ approach. His master plan is to harness the energy of media driven hype and make it work for him and his mission to psychologically empower his team, and intimidate his opponents.

There is nothing wrong with this, even it does stick somewhat in the Corinthian craw. It’s a way of doing business. His way of doing things. What it isn’t, is Mourinho attempting to be courteous or respectful of the media or to communicate with the paying public. He is blatantly using all concerned to win a game, by any means necessary.

This where Mourinho and Kenny Dalglish are entirely in sync, and where the likes of Matt Hughes entirely miss the point. Kenny does not feel his talents are best addressed towards trying to manipulate his players or his opponents via the media. He feels (like Mourinho) that his single purpose is to help Liverpool football club win football matches. He is not there to be liked or to communicate with anyone but his players.

Is this inherently disrespectful to his team’s fans ? Of course it isn’t. He trusts that the Liverpool public he grew up with and led to so much success demand only that he give his all for the cause of making the team on the pitch a winning one.That public are an educated one, who understand that the manager is best serving the team and fans interests by telling journalists as close to absolutely nothing as he can physically manage.

Why on earth should he tell journalists what his intentions are as regards playing Steven Gerrard ? That may satisfy some curiosities but it will also give his next opponent an inkling of an insight into Liverpool’s planning. As Rafa Benitez always preached, the devil, or the winning in football’s case, is always ‘ in the small details’.

Kenny’s press conferences are, ironically, hugely entertaining to Liverpool fans. Watching him spikely spar with the media, telling them fuck all, whilst also taking the piss out of the eternally hapless, like Sky’s Vinnie O’Connor, is never anything less than compelling viewing/listening. If Kenny is prone to occasional rudeness and to putting down certain journalists it is because he (rightly) feels that they are insulting his intelligence by asking certain questions.

It is abundantly clear that he is not in the business of giving anything away that he feels may assist his opponents or damage his team, yet questioner after questioner, at any given Liverpool press conference, will attempt to outmanoeuvre him by making the same enquiry in a number of guises. It is relentless and predictable and Dalglish tires of it. Sorry Matt Hughes and others, but that’s just the way it is.

The fans are of course always ready to hear more real insight, but are content to see the main man doing his real job well. They know that there is no silverware for making journalists happy, although despite Matt Hughes disdain, Kenny does still seem to do a reasonable job at keeping a roomful of the press brimming more with mirth than resentment. The smarter hacks appear to have come to appreciate the man’s quickness and scornful wit as having a certain unique charm.

The football public did once live in a universe where managers were more seen than heard, and their appreciation of the game and passion felt for teams was not even slightly diminished by the absence of an interrogative media. The likes of Shanks, or Clough, or Mourinho, will always be around to throw fish for journos, and be able to do that to the satisfaction of all whilst also doing their day jobs rather well.

Others like Bob Paisley and Kenny Dalglish will never give the press anything of note. They remain equally beloved of their constituency, the fans, and will strive tirelessly to deliver to that group a bounty to a level of satisfaction that can only ultimately be measured only in points, prizes and trophies. Not soundbites.