Easy targets – Torres, Rosenthal and the politics of misses 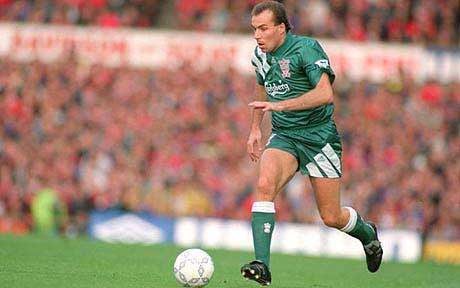 Gone but not forgotten. Ever.

AS the hedge fund managers using Twitter to gauge the public mood have realised, social media offers a window into our collective hive mind, with all the horrors that entails.

While the online environment can distort some ideas, giving undue prominence to the (hopefully) niche view that Justin Bieber would make a fine US president, sometimes it undoubtedly taps in to the immediate thoughts and reactions of large sections of society.
One such moment occurred just before 6pm yesterday, when seemingly half the country’s football fans thought and tweeted the words ‘Ronny Rosenthal’ (in fact, in many cases it was ‘Ronnie Rosenthal’ or some other spelling variant of their own imagining – Twitter also teaches us that people are idiots).
As the ball skewed off the left boot of Fernando Torres and in to the Stretford End, Ronny’s name filled up my news feed as the central element of a succession of weak puns.
Rosenthal, 19 years on from his miss against Aston Villa, has become a byword for the seemingly inexplicable finishing malfunction.
Mention the Israeli’s name to non-Reds, and indeed to plenty of our own fans, and you’re likely to provoke a chuckle and the confident assertion that it was ‘the worst miss ever’.
Is it fair, is it equal, is it just, is it right? Of course it isn’t. Aside from the fact that Ronny achieved plenty in his brief spell at Anfield – including this perfect hat-trick against Charlton Athletic, it’s not as if his effort was any more shocking than countless misses down the years.
To cite a couple of relatively recent examples from English football, Kanu for West Brom against Middlesbrough in 2005 and Giggs against Arsenal in the FA Cup were worse misses with far more at stake in the circumstances.
If the quality of a goal should be measured by the situation surrounding it then surely so should the awfulness of a miss.
Liverpool lost that Villa game but the Giggs chance came in a home cup defeat to close rivals, while Kanu skied his opportunity in the context of a desperate battle against relegation.
In this company, Rosenthal’s miss is neither exceptionally poor nor exceptionally consequential. So what’s the secret to its enduring hold on the nation’s footballing psyche?
It’s always tempting as a Liverpool writer to reach for the accusation of media bias, but in truth there’s not much to go on in terms of building a conspiracy theory here.
Sadly for Ronny, his miss just seemed to come at a time when several factors converged to make it stand out.
Firstly, and perhaps most importantly, it was September 1992. The Premier League had launched just weeks earlier and many fans were taking a renewed interest in the game, falling for what was essentially nothing more than a rebranding exercise.
Amid a relatively quiet start to the season, the Rosenthal miss was a rare notable moment. Match of the Day, enjoying soaring viewing figures, gleefully replayed the moment and it became a talking point at workplaces and schools up and down the land.
It also happened to just the worst kind of club and just the worst kind of player. Observers, particularly the kind of johnny-come-lately gentrified newcomers the game was beginning to attract, wouldn’t be surprised to see incompetence from a comparatively lowly club.
From Liverpool, on the other hand, they expected excellence. Title winners in 1989-90, runners up the following season, it was not immediately apparent that the side were about to enter a dismal period of inertia.
The fact a Liverpool player had missed made the incident stand out, yet had it been John Barnes who’d slammed the ball against the bar it would most likely have been long forgotten by now.
A player with enough of a hinterland has the ability to ride out the storm, grit his teeth amid the catcalls and get back on track. Nobody mentions the Giggs miss because he’s done so much else in his career.
For Ronny, though, there were too few widely-recognised career highs to blot out the moment he slid his foot under the ball and watched in dismay as the net failed to bulge.
That shouldn’t be a problem for Torres, a striker with as rich a pedigree as you could hope for and who showed sustained flashes of something approaching his best form at Old Trafford.
In 15 years’ time when Romeo Beckham scoops the ball over an open goal from six yards out, it’s not the name of Fernando Torres fans of the Walmart Manchester United Wildcats will be invoking, but that of Ronny ‘Villa Park engraved upon my heart’ Rosenthal.
@steve_graves