LFC and Moneyball – the good, the bad, the ugly and the applicable

WE Reds stand, once again, on the precipice of another season. Never sure, nowadays, whether to be looking up or down. Hope in our hearts but anxiety in our souls. It seems to have been this way for far too long now.

Those of us old enough to remember how a ‘groundhog’ season played out, back ‘then’, know that it used to start with an August romp in the Wembley sunshine (as the previous season’s also-rans were casually despatched by two or three goals), and the lifting of the Charity Shield, and ended in similar silvery vein, come the following May.

The modern version feels like it’s been running as long as ‘The Mouse Trap’. A summer of new signings heralding new-found optimism, preceding a stuttering start, a bleak midwinter, a spring revival sufficient to raise temperatures, but ultimately scant in real substance.

The closing curtain, in May, ushering in another summer of regrets and reflections, and re-orientating of expectations.

This year, though, it’s going to be different. Definitely. Maybe. For a start, it’s the debut season of the new owners of Liverpool Football club, those good Bostonians of the Fenway Sports Group. So far they feel right.

Not murky evil old school American vaudevillian Republicans like that last mob. This time. This time, we’ve got the real deal. Clever, modern, witty, liberal Americans. The good type. The type that invent iPhones and good quality ice cream and who give money to Barack Obama rather than ‘big oil’.

These guys seem to have a track record. A Philosophy. A mission statement. An actual plan. Their arrival on our scene was accompanied by tales of their ‘against the odds’ successes in baseball, and about how their leader and spiritual guide, John Henry, adopted the progressive new approach documented in Michael Lewis’s celebrated ‘Moneyball’ best seller, to engineer the revival of his Boston Red Sox team.

Henry and FSG wasted no time, upon landing on these Mersey shores, in commencing project ‘let’s see if Moneyball can be applied to soccer’. The first act of the experiment on the LFC guinea pig was the hiring of an in-house Moneyball ‘mad-scientist’, in the guise of Damien Comolli.

We’ve all, by now, read of Damien’s mixed bag of a pedigree but are broadly, thus far, trusting John Henry that his faith in Comolli is the act that will ultimately count.

Being ‘Moneyball’ literate is the new entry-level requirement for those who want to alight the all new and improved ‘only way is up’ LFC train.

Truth is though, how many of us really appreciate that to which we are tacitly and implicitly giving our support every time we walk through an Anfield turnstile?

I’ve spoken to lots of football people who have an opinion on the Moneyball thing.

‘So, you’ve read it?’ ‘Oh well, no, I’ve not actually read it, but I understand the principles.’

Right then. Consequently, I thought it high time I actually became one of the few Reds I know who had actually bothered to read the sacred tome that John Henry and Damien Comolli keep under their pillows at night.

Here’s how it goes : It’s an everyday tale of how a Director of Baseball (the General Manager/’GM’) called Billy Beane (no, really) proves to be the proverbial Billy Bollocks at some poxy outfit in a big baseball league in the States.

The book chronicles how, via Beane’s slavish, unwavering adherence to taking an objective and statistical overview of the game (in the face of the timeless ‘wisdom’ of baseball’s elders), he is able to circumnavigate the requirement for pro sport’s traditional weapon of choice, money.

Really quite good in bits, and soul-destroyingly dull in others. Despite what the back cover plaudits will tell you, it would more than help to give a damn about baseball to make this volume worth the slug (baseball pun intended).

So, what does it tell us about the John Henry/Comolli master plan for LFC?

Well, first up, if I were Kenny Dalglish I’d be more than a tad concerned after reading Moneyball. In fact, Kenny, don’t read it whatever you do.

The actual team manager at that Oakland As baseball team (Kenny’s equivalent) seemed to have existed for ceremonial purposes only.

The Director of Baseball/GM guy, Billy Beane, rules that roost in a way that would have any half-decent football manager in Europe fit to kill and quit.

If Comolli harbours any Beane-like fantasies then we are in deep water. Beane, it would seem, is a controlling egotist, perfectly suited for his time and sport. An intelligent and fanatical demagogue, who dominates his club entirely, and in a way, one senses, that is totally non-applicable to football as we know it.

The tale of Billy’s resolute mission to disregard the old baseball scriptures and listen to the magic numbers that are proffered from Harvard ‘genius’ and geek archetype Paul Podesta’s OPTA style computer-generated analysis, is a compelling one.

The evangelicalism of the Beane team seems uniquely American, but that’s not to devalue the underlying premise of their advocacy of what came to be known as Sabermetrics (the term is derived from the acronym SABR, which stands for the Society for American Baseball Research).

Heck, it clearly worked. The proof was in that pudding. Billy’s team won, and won good. If LFC was an English baseball franchise there would indeed be every reason to be very excited that devoted Beane-ites were now shaping our destiny.

Different analysts will undoubtedly emphasise varying aspects of the Moneyball premise, but the following appear to be the key elements : 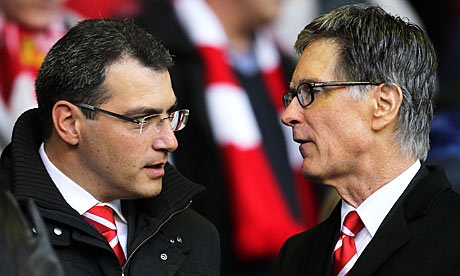 It all seems very ‘Wall Street’ to those of a fragile or Corinthian disposition, but in so many respects ‘soccer’ is very ripe for the Moneyball experiment.

So much analysis in football, at all levels of expertise, is subjective. One highly-successful manager can rate a player as essential that a peer wouldn’t give a second glance to.

In many respects football (soccer) is ‘showbusiness’ and those capable of the dramatic will command a premium. However, the main objective of the sport is winning not entertaining (fans can romanticise about stylistic criteria, but the manager who prioritises beauty above winning will surely fail).

For a manager the win is an absolute goal and must stand distinct from all other criteria when selecting a player or playing style. Maintaining a competitive advantage hinges on never resting on ‘statistical laurels’ – there must be a humility to accept that the science is a very inexact one and needs to be constantly refined, redrafted, torn up, and re-invented.

The main problem with the applicability of Moneyball is clearly that baseball is a very different proposition to our football.

True experts may beg to differ but it appears that the American sport is an individual one set in a very structured team context. If you put the sports best individual performers together in one team , then you can be fairly certain that team will be the best.

In soccer that potential correlation has never been a given one. The timeless soccer wisdom has always been ‘give me a bonded team of men willing to die for each other’ rather than ‘a collection of superstars’.

A football team can be viewed as one organism. It’s sum should ideally be greater than its parts.

The Moneyball missionaries would argue at this point that their system, in fact, tries to circumnavigate the ‘star’ system by identifying, not crowd pleasers, but the sport’s true functionaries.

Those who quietly, but unspectacularly produce what truly matters – results. This is all fair enough, but the distinction between the two sports remains.

Once you have identified these ‘hidden stars’ (as opposed to the showbiz guys) of baseball, you still aren’t truly required to gel them with their team mates in the way you are in soccer.

It is really really easy to sneer at the whole Moneyball bag. As a science it’s naive, shallow and flimsy. It’s as faith driven and intuitive as the creed of the dinosaurs it seeks to outmanoeuvre and extinguish.

Yet, it’s right. It’s the correct approach. The only approach, in a situation in a sport where the objective is to win, and to win despite a paucity of resources relative to your rivals.

Unless Liverpool Football Club can stumble upon a way to get wealthier than Manchester United, Real Madrid and co, then we are stuck with accepting that if we do things the same way as them then they will always ultimately trump us with their dough.

Doing ‘something different’ will be the thing that gives us an edge they inherently won’t have. The John Henry/Comolli experiment feels different. Very different to the past. Different enough to be effective.

Only time will tell of course. In the meantime, Vive le difference.

Next week (for those still awake) : More Moneybollocks.