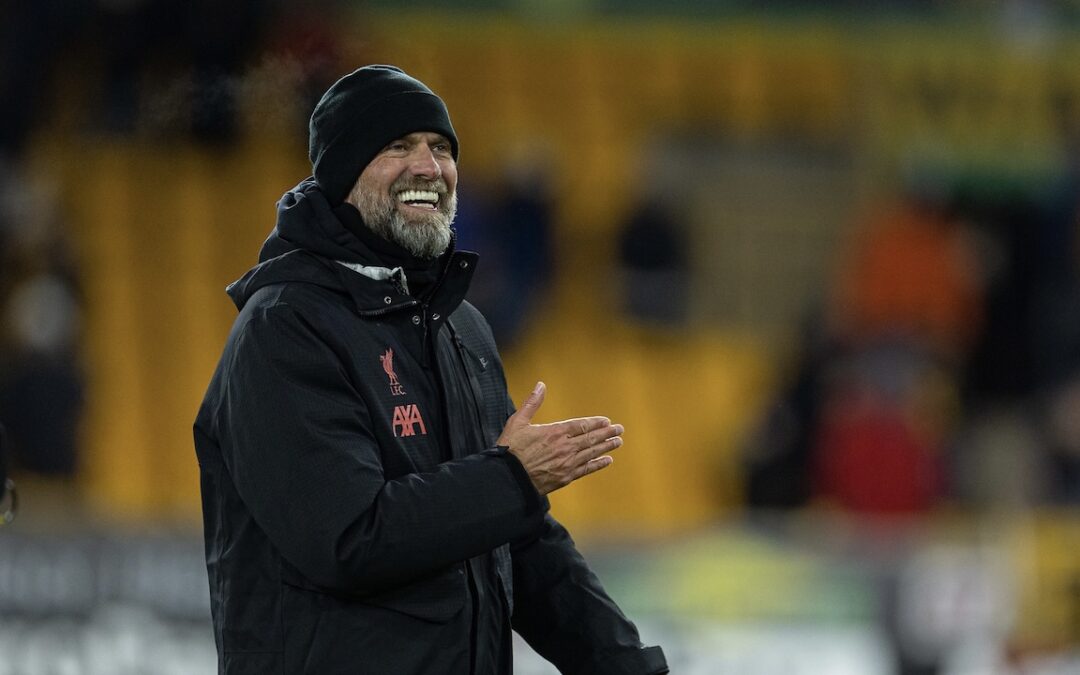 IT needed to be fun again, first and foremost.

Jürgen Klopp spoke this week of getting back to basics, and the basics for us as fans is being able to enjoy the football we’re watching.

That’s not to say that the travelling Kop would have all been moping on the way back from Brighton — and if you think they would’ve been, you’re wrong — but their enjoyment would’ve been in spite of the performance and the result, rather than being buoyed by both.

Tonight, we’re heading back from Wolverhampton buoyed by both, and it was fun again. Fun being in the ground, fun watching The Reds and then, obviously, fun on the way home. That’s the basics.

We get to feel more like ourselves because we got to see a Liverpool side that looked more like themselves. And yet it was much-changed from the 11 we’re used to — the one that all but burnt our heads out in Brentford and then Brighton.

From front to back tonight there were huge performances. The keeper was great in the moments he needed to be, James Milner set the tempo for the team, and Kostas Tsimikas dealt with a tough battle valiantly. The centre-back pairing get a well-earned clean sheet and hopefully another start together at the weekend.

The midfield was great, led by the seriously bright Stefan Bajcetic. He should turn out to be some footballer for Liverpool and tonight it was more than clear to see why everybody within The Academy at Kirkby have been so excited about him. Thiago Alcantara enjoyed his football again and Naby Keita got through so much work — I’d give him a new contract for his time-wasting tactics alone.

Upfront, Harvey Elliott and Cody Gakpo didn’t give the Wolves defence a moment’s peace in the first half. Elliott’s goal was a huge moment for him personally and for this team, after what has been a tough few weeks for him. Tonight you see what it looks like when he plays in his best position. Gakpo was unlucky not to score and Fabio Carvalho looked moments away from making something happen over and over.

The subs gave the team less attacking impetus, but allowed The Reds to manage the game and earn a hard-fought clean sheet. Wolves never sat back and it would be a huge surprise if a side with that much quality ends up too heavily involved in a relegation scrap. They came up with nothing tonight, but that’s because they came up against a side who needed to prove a point.

Point taken, Liverpool. What a show of faith and solidarity and fun. Another strong case made for digging that bit deeper into the squad, but also for playing to strengths and empowerment.

If you wanna win a cup then you better hurry up. Because we’re Liverpool FC, it’s back to basics, and our basics are the big shiny things.

“I think we all needed to see a different set of footballers, and what we seen tonight was a performance that looked more like Liverpool…”