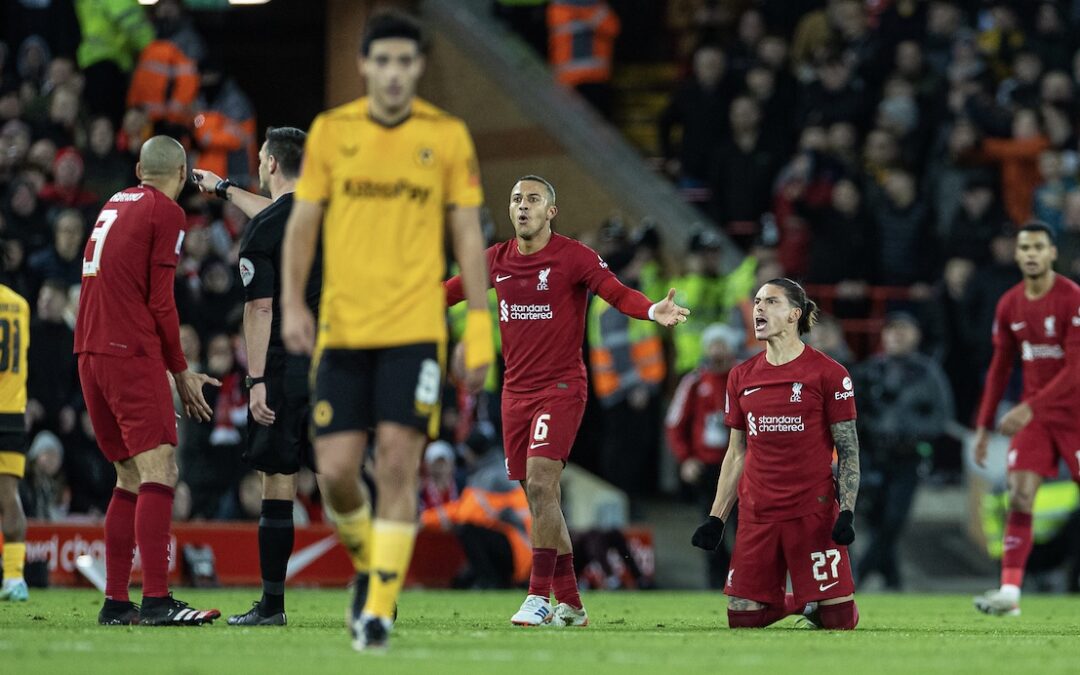 THEY are going to play that fixture again.

Feels almost immoral, to be honest with you.

In 1980, Liverpool played Arsenal four times in the FA Cup semi final. Three replays. Very few goals. This game felt like that. With one more go round.

This is the first 11. These are senior players. And they start OK, you know. It is a decent first 15 and Liverpool have some vibrancy about them.

All through the season we’ve focused on them conceding the first goal, but perhaps it is time to wonder about what they are up to 15 to 30. Because they can be rope-a-doped a little. They can bamboozle themselves when they don’t find a way.

So much of this season is best described as searching for a spark, as wanting, waiting to find the moment when the whole game gets to be ablaze for Liverpool. When the heart pounds.

There has been much chat about Liverpool this season and their shortcomings. Physical. Technical. Tactical. But today, not for the first time, one other shortcoming manifests – emotional.

For years this has been a deeply emotional exchange; it has been heartrendering. It has aged me, I am sure it has aged you. But I wouldn’t change a thing, not least because it has been part of falling in love with you, in love with them. It has been supporting a pressure cooker, it has been watching footballers put their lives on the line over and over and it reached its unexpected, unconventional zenith last season.

On paper, I suspect Liverpool’s backroom boffins felt it would be a season of transition. But suddenly it became a furnace of possibility. Suddenly the most unexpected became almost expected. Suddenly legendary status beckoned.

There’s a photo I think of at least once a week which is Mo Salah looking like a man who has cried while receiving the golden boot. When Salah scored against Wolves last season he reacted like a man who had won the league. He was behind events.

But it wasn’t to be. And then Paris which I try not to speak of, for us, for them. It wasn’t to be in all the ways and it fucking hurt. For us. For them. For you if you were there and even if you weren’t, because you knew there was a thing and you wanted to help and I wanted you to help too.

In pouring everything in there could just be nowhere near enough left. There are constituent parts but no spark. One kiss is all it takes. But one kiss.

No spark because they took a fucking European Cup final off us and they can go fuck themselves for that.

Today wasn’t just that obviously, but today was the most sparkless day imaginable in the end. Today we need to acknowledge the quality of the opposition, of course. They are a sensible football team far better than their league position, a set of lads suddenly organised and with a sense of purpose. I liked them ever so much – they’d best stay up – maybe, naughtily, more than I liked us.

Us. Andy Robertson isn’t always good but is indefatigable. Mo Salah is cool, Cody Gakpo has something and Ibou Konate finds a way.

Alisson Becker has a nightmare but I struggle to find a harsh word because he is the best one. Trent Alexander-Arnold’s ball for the goal is divine and he is one of ours.

Thiago Alcantara has one of his poorest outings, but he gets the 90. Jordan Henderson has had poorer outings but gets the hook. It was good, again, to have quality time with Naby Keita. My kingdom for a start.

None of this is a problem that cannot be solved, but it feels like four problems or five. And that needs some oomph.

Maybe this is why Darwin Nunez feels so good. Because he makes you feel. Because he is a spark.

They are going to play that fixture again whether we like it or not.

I want to like it. I want the night out. I want the chaos and pounding love. I’m just about starving tonight. I’m dying for some action. There’s a joke somewhere and it’s on me. No more dancing in the dark. Give me just one look.

“That just felt dispiriting. A faint silver lining that we are still in the hat, but we’ve now got to play another game of football which just feels like a chore at the minute…”