FSG Out Protests & The Disconnect Between Liverpool Fans 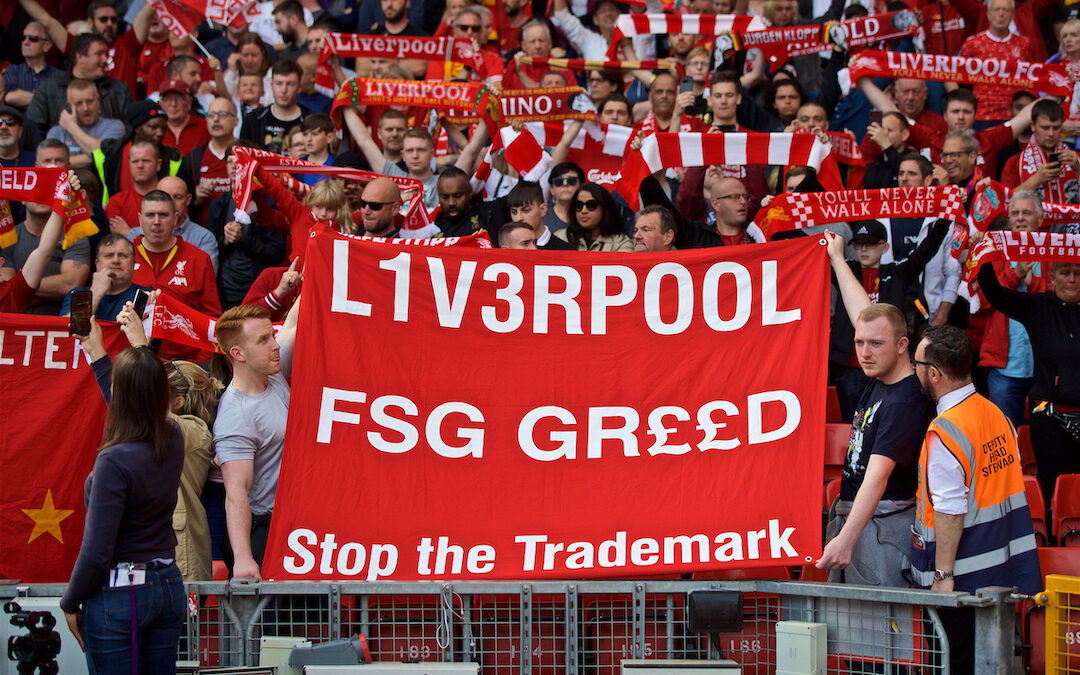 After ‘FSG Out’ protests that were organised ahead of the Chelsea game never took place, just how big is the disconnect between Liverpool fans?

THERE was once a time when Liverpool versus Chelsea was the talking point of the week.

It seemed like we played each other monthly when Rafa Benitez was in charge and even last season we still managed to face them four times.

But before Saturday’s turgid encounter between what the BBC were delighted to describe as ‘two mid-table teams’, there was a sideshow about an anti-FSG march organised online.

Journalist David Lynch investigated this, by which I mean he went to the setting-off point at the requisite time and found no one in attendance. No one was there. Not a single banner in sight.

As an Anfield Wrap writer, I can’t really win with the FSG debate. I love a protest and anything that irons out inequalities in the game or calls out faceless bureaucracy is very much in my wheelhouse. I love a bit of agitation.

But time and again I’m asked on various platforms about when I’m going to publicly criticise the owners. I do so. A lot. Furthermore, I’m not alone in that. There are over 50 contributors to the site and the shows, and there’s no such thing as a blanket opinion.

Some would rather hope we would not be sold while others would like to see an improvement in FSG’s stewardship, but I can’t think of anyone who holds them dearly to their hearts.

But apparently we’re all on the take from Boston or have our special access to the players denied if we’re nasty about the club. That’s a hell of an accusation and I wish someone would have told me. I’ve not had a penny. Nor has anyone else.

Me on the ownership etc.https://t.co/9X1qoTXKL2

As for access, I once walked across the Kemlyn Road car park with Philippe Coutinho. I wished him luck for the upcoming League Cup final against Manchester City. He thanked me and promptly missed a pen in the shootout. I’ve not been near a player since.

And I’m not having a go at those who see a march as necessary. Protest is good, protest is important, even if you don’t agree with the basic premise. Protests are done to voice views and ultimately change opinions and many would agree with some of their concerns.

We’d all like a better, deeper squad. We’d all like to overhaul the midfield. I have no problem with those thinking that the owners should be investing more.

But this was an infantile endeavour and its outcome is humiliating. The whole escapade was poorly handled and as puerile as the ‘Top Reds’ demarcation, which seems to be levelled at people who go to football matches and don’t pour down scorn on company finances at every turn.

I’m suspicious of those who type ‘the local fans should be demonstrating’ as if protest by proxy has any value. As President Bartlet says in The West Wing: “decisions are made by those who show up.”

The fact is that if the online world is furious with the owners and even advocating state ownership, Anfield itself isn’t listening. I’ve not heard a single chant about it in the ground nor a word from my mates who have been doing this for decades.

Maybe that’s because they have fought bigger issues. They were there when there were marches, phone-ins and sit-ins in 2010, when there was a very real chance that the club would go to the wall. Many of them were organised or participated in by contributors to The Anfield Wrap. It’s not as if we’re scared of shouting out.

But Anfield didn’t listen. It could be the lack of focal point that’s responsible. The Spirit of Shankly was formed in protest against Tom Hicks and George Gillett and, though that’s not a body adored by all, it gave the movement organisation and a platform for negotiation. The ‘FSG Out’ campaign is more dissolute.

Just nipped down to check in on the pre-match protest that was supposed to start here at 11.30. Proof if ever it was needed of the complete disconnect between social media and real life. pic.twitter.com/OJ70Bms2Wo

Recruitment is key too. If you’re going to mobilise an army, try not to slate the very troops you’re trying to recruit. Top Reds, stooges etc. That’s pathetic and comes across as spoilt caterwauling.

Until that happens they’re just shouting at clouds. There’s no gravitas in that. A hashtag is just a description of a standpoint, not a debate itself promoting change. John Henry isn’t going to listen to that. No, they need to put a serious face on their agenda. Name-calling and a desire to produce in-fighting from afar isn’t going to start a revolution.

Personally, I’m not convinced it’s a battle that can be won. Fighting to save the club we love is one thing. Taking up cudgels because we haven’t bought a midfielder seems a bit… I don’t know… Trivial?

I’ve no love for the owners but that’s largely based on their treatment of our greatest living hero in 2012, the numerous public apologies, the £77 ticket hike, the childish retort to Arsenal’s Luis Suarez bid and other petty objections. Do I think they’re doing enough? No. But right now I don’t think anyone is.

I wonder how much of this is really a protest that it’s no longer 2018-20. That the days of Sadio Mane, Roberto Firmino and Mo Salah are no more. That the rest of the league has worked us out. That things are no longer going well and people don’t like that.

I don’t for a start. I wanted the league more than anything, then I wanted regular leagues and European Cups, but there are an awful lot of barriers to such utopia.

David Lynch summed up the empty streets as a ‘complete disconnect between social media and real life.’ It’s hard to disagree with that.

Saturday was the perfect example of that and the schism of the club’s support across all platforms and intensity.