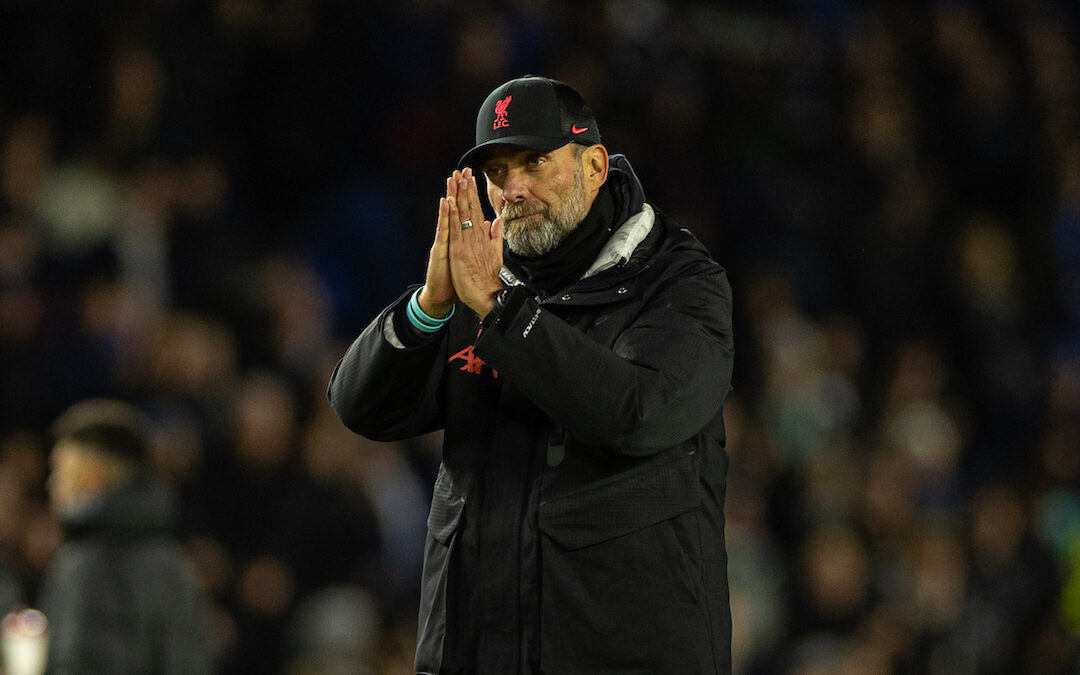 THE second went in and I just sat down.

Head in hands. Felt like my windpipe had been cut. Knew there was simply no way back.

I always cite Leicester away in 2016 for one that felt like that. Where the final whistle might as well go there and then.

There haven’t been many – COVID season aside – and that’s to this side and squad’s credit, I suppose. However, it is why it kills at the moment that they are re-emerging and that today’s is the worst yet.

Liverpool were dreadful first half and got away with it, but this season there is no gift horse they can’t look in the mouth. Getting to half time at 0-0 having played that poorly, invited that much pressure, created that little was actually a mini-achievement. I mean, they did their best from about 40 minutes to brainlessly play their way into trouble and not take the half-time respite they didn’t deserve, but somehow they got there.

And then nothing changed. Nothing from the bench, nothing in the approach and Joel Matip decided to give Brighton a gift they really, really didn’t need. One-nil.

Liverpool’s performances have been eroding for some time. Every bad showing knocking the collective confidence. Another player to add to the list of question marks every week. If we’re lucky today is the end of that because there is nothing left to erode.

The manager changed the shape if not the personnel, barring Darwin Nunez having his knock, and it was malfunctioning early and often. Thiago Alcantara couldn’t get near the ball. Fabinho couldn’t win the ball. Jordan Henderson did manage to get on the ball occasionally, but then that was counter-productive as he was rubbish.

But the erosion I’m speaking of wasn’t limited to midfield. Trent Alexander-Arnold could well have been Liverpool’s best outfield player across the 90, but he couldn’t work out a starting position. Joel Matip had possibly his worst ever hour for Liverpool. Ibou Konate fire fought but occasionally also lit fires.

Alex Oxlade-Chamberlain didn’t seem to know where he was playing; somehow not left mid, left wing or left forward. Which, considering he was on the left, was quite something.

Mo Salah and Cody Gakpo both suggested they may be dangerous if they got into the game, but were ultimately so deeply isolated.

But at least the selections of the non-midfielders seemed sensible. Seeing the teamsheet drop I was stunned. As said all week on shows, I’d have started Naby Keita at the expense of Jordan Henderson but could have taken any or all of the three against Wolverhampton Wanderers not starting.

Instead, Liverpool perservere without any of the virtues of perseverance. Instead they erode themselves into dust.

Brighton & Hove Albion were very good. But they had the run of the place. Every Liverpool player was between stools, in the half spaces in the worst way. Liverpool mistook being compact with being inert. They laid the red carpet out.

They look so clapped out and that’s concerning because there are 20 games to go. They aren’t in a moment of transition because there is no sign of what they are transitioning to.

We left on 83, not even the promise of Ben Doak or even the mini chaos the quadruple substitution brought lightened the load of it all. Keita was bright again. Harvey Elliott buzzed about. Thiago at six is mildly of interest, perhaps.

But leaving on 83. Leicester in 2016 could be the last time I’ve done that too. It is basically horrible watching them.

“I think it’s right up as the worst I’ve seen Liverpool play in the flesh. Just because of how meek it was, and the complete lack of belief that anything good would happen.”