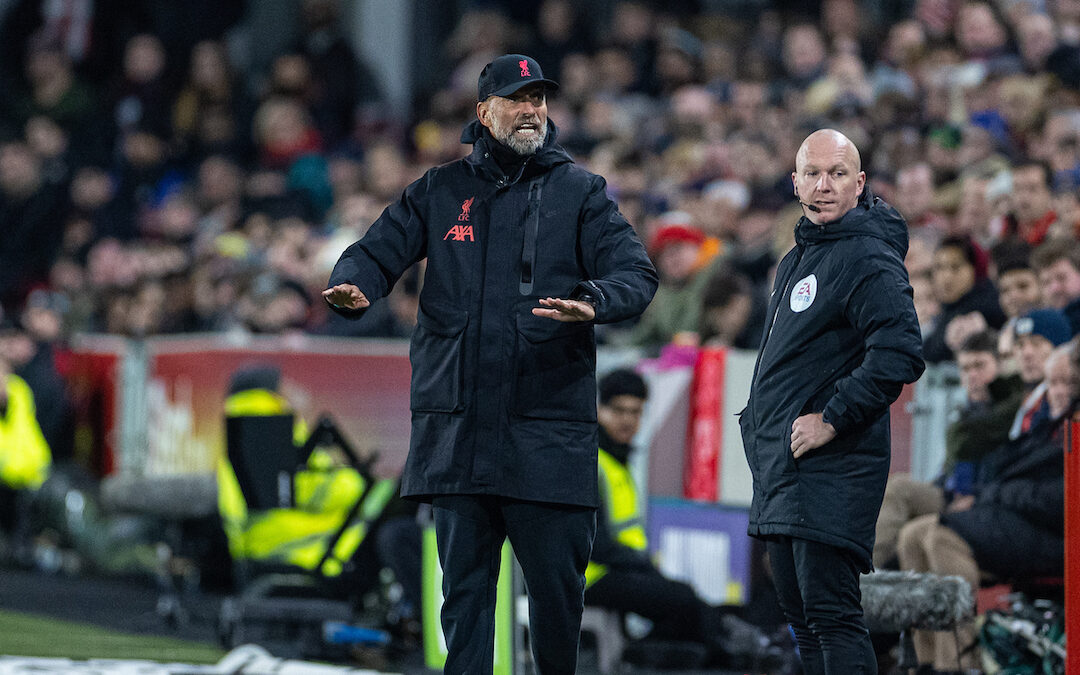 For 11 on the pitch, several thousand in the ground, all of us watching on the telly. For Jürgen Klopp, unable to fix it. Agony.

But Jürgen needs to think about why it needed fixing.

Let me be clear: I’m not slaughtering 19 year olds doing their best. I’m asking why they are picked in the first place.

In the aftermath of Leicester City, I presumed that Harvey Elliott’s start was to conserve the legs of Naby Keita. After all, Brentford’s physical but granular approach surely necessitated the selection of three midfielders of experience and some degree of physical prowess.

Instead, with Jordan Henderson’s absence, we still get Elliott and then we get an entirely predictable showing. This is where I need to be careful, but where the manager does too. The facts are these – Elliott’s performances have diminished and he is genuinely impacting the structure of the whole side in this role. He is unable to play in a 4-3-3 in the midfield area and it is skewing everything, making it harder for everyone.

However, to then see Naby Keita be broadly speaking sound for 45 drives you even madder. If he can do 45, he can do 55. And then you bring someone like Elliott on.

None of this is to say Harvey Elliott is solely to blame for tonight. Or that he won’t make 500 Liverpool appearances. It is to explain why, well, this is on the manager. I am solely asking why he is picked in the first place.

The manager is off the back of two good games. He has made smart subs in both and maybe got lucky with his selection against Leicester, but in a direct sense subs and half times are the job and he does alright here tonight too.

Our most calm and faithful centre back was confused and lost. Our new young forward managed to get the ball in the back of the net but of course, offside. Agony. The lot of it. Drown your sorrows. Kick the sofa. Pound the cushion.

Feel the agony. But more important is the analysis.

Thiago plays well yet again for long stretches, but plays everyone into trouble in key moments. We are too too narrow and we get overloaded so easily. It has to be stopped with quick confident passing but none of that works.

Ibrahim Konate’s leg cannot be held responsible for the ball bouncing off it and into the goal. But all the defenders are responsible for basic errors of space and pace. Our high line only works with constant pressing.

Too narrow. Too narrow. Again and again. It is agony to watch. Brentford counter attack and overload. And Liverpool undershoot and are controlled.

We should not in our agony forget credit where is it due. And the 86th minute third goal is deserved by Mbeumo. Their pace is very credible and their tactics were right. The manager watched Mo Salah being overcrowded and crowded out by teams over the Christmas period and knew what he had to do.

Being fair, Brentford block passing lanes brilliantly time and again. Being fair, they do the granular thing. I love how clever they are, you know. It’s one thing to be physically imposing, but another thing entirely to break the game down as they do. They are a credit to themselves, their manager, their entire setup and their crowd who are having a ball.

Tonight is, in a number of ways, one of the most significant evenings in their history. Tonight they get to beat Manchester United and Liverpool at home in one season. This isn’t a trophy, but it is close. However, if they pick their moment, a trophy may not be beyond them. They are bright as a button and as big as The Giant, O’Brien.

Fabinho played well. Andy Robertson is good when he comes on. Alex Oxlade-Chamberlain showed the value of doing a job. Joel Matip showed a bit. The issue isn’t generality, it is moments and the thing is this: opponents know that too.

By the end both sides are shattered, but that begs the question about whether it is better to start or end with the better players. It sends us back to asking the why.

I need, we need not to be in agony but to be able to be in love win or lose. That’s the toughest trot at the minute. At Southampton, back in May, I’d have given them everything. They held my heart in their hands.

Right now, because of what we have all been through, because of them becoming doombrains, because it is hard to always run uphill, because they chose not to refresh, because they keep making similar errors, because they have moved away from their essence, they are hard to love. In not being able to love we all become unloveable.

“It’s how badly we dealt with what they threw at us, how stupid our decision making was, how we refused to get out at 1-0 and reassess. It did my head in.”