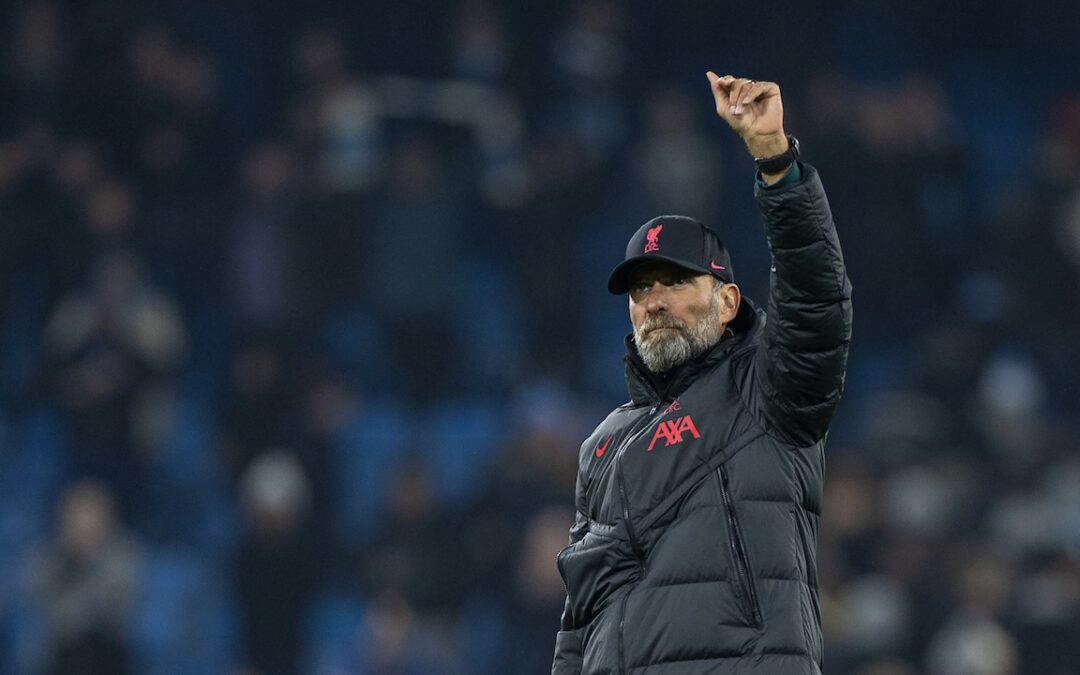 OH God. We’re back and I missed you.

A game of football broke out. Their side was both surprising and unsurprising. It was stronger than ours from the outset but that proved to be alright.

No one could say this is a full strength Liverpool side. Or maybe they could. Maybe what they would say is that this is a Liverpool League Cup side and that Jürgen has landed on a way of managing this competition. Kelleher: this is yours, lad. The offer to Bajcetic. There are enough games for everyone. It is a strategy that may not bear fruit tonight, but that has and will in the long term.

It’s OK to get beat. If we have learned anything from the last seven years of Jürgen Klopp, anything from what came before, it is OK to lose games of football, as long as you find a way through and a way out.

Liverpool found both tonight – when Manchester City make it 1-0 we all fear the worst. Erling Haaland is effervescent and Liverpool are on the ropes.

We find a way. We find our way. We expand into their half and find out that the other side of Rodri is the entirety of Manchester City’s weak points.

Rodri is their essence. He is their belt and braces. The only Liverpudlian regret from tonight should be that he gets to put himself about, to give it the big one. He gets to referee and that needs to stop quickly.

Quietly he has been the most important player in the last two and a bit seasons of the Premier League. Acknowledging this matters; understanding what makes them tick stops the tick. Today we fall short and that’s both tactical and cultural.

But it goes 1-0 and Liverpool find their way. It’s a lovely finish from one of Liverpool’s little lads. The little lad dynamic is concerning but Fabio Carvalho is a pure finisher. It is sumptuous stuff.

When it goes 2-1 you worry, but my god is Alex Oxlade-Chamberlain good in the build up to the equaliser. So is Darwin Nunez. And then Mo Salah. It is a truly great goal.

It would be easy to then look at Darwin Nunez and find a way to criticise him. But I love being in the position.

Regardless, Darwin Nunez will go to bed a frustrated person this evening. Three times he got himself in the position to score against Manchester City in the League Cup. Three times he put the ball wide. Getting in the right place to score is hard against this side. But there are no points for near misses.

Jürgen Klopp will have seen his young forward’s frustrations and no doubt will take comfort from the repetition of the attempts. But the poise Nunez finds in the moment for the equaliser is enough, yet again. He is one of ours and we are his.

They all repeatedly get to be one of ours. That’s what I wanted coming back.

The winning needs to follow soon. Obviously it does. But if you aren’t winning this trophy then tonight will do.

We’re back and I missed you and it was fabulous to see you today. I adored hearing from you. I was in love with every moment.

To be clear: from now to the end, these will be love songs this season. We’re getting soppy like we have in the past.

And like in the past, you aren’t going to let me down.