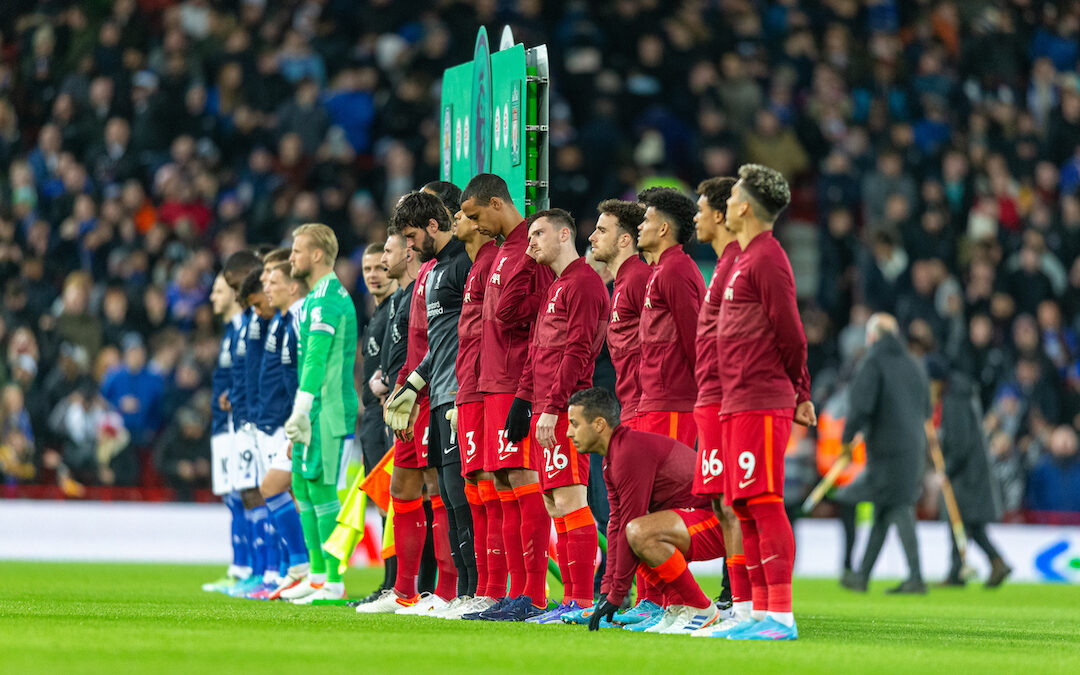 The Anfield Wrap’s match preview before Liverpool v Leicester City in the Premier League at Anfield, under the Friday night lights…

I ABSOLUTELY adore it when Liverpool make us look stupid.

To be fair to them, the hints had very much been dropped. The manager said that they were “always prepared” and answered “doing something again that is very positive – why not?” when asked about any potential repeats of Luis Diaz-style January signing.

Then, in the aftermath of the win at Aston Villa, Virgil van Dijk could not have been much more blatant in commenting: “hopefully we can welcome some new players at our football club.”

But we didn’t expect that new player to arrive the very same evening in the form of his Dutch teammate Cody Gakpo. Just a few hours after the news broke that conversations were advancing, PSV Eindhoven had announced that the deal for the 23-year-old was over the line. A very Merry Christmas to all of you, Reds.

Above the obvious short-term gain with both Luis Diaz and Diogo Jota still on the sidelines, Cody Gakpo will certainly be seen as a long-term prospect. At 6ft4 his physicality is a huge asset, and his natural finishing ability was clear for all to see at the World Cup.

We’ve got all the content you could ever need on Gakpo over on the app, so head there for the expert view from those who know his style best, but I expect people to be surprised by his versatility.

Widely spoken about as a left-sided forward, he is young enough to be moulded by Jürgen Klopp and is well equipped as a number 10 to help attackers thrive – his assist stats speak for themselves.

He is undeniably a huge boost ahead of a busy festive period and beyond, and we will all hope he can have the same impact on our season as Luis Diaz last year. As he gets settled in at Liverpool, the rest of the players will be focusing on preparations for their first home game in almost seven weeks as Brendan Rodgers’ Leicester head to Anfield.

After a quiet summer, Leicester will be disappointed with their slow start to the season, but they’ll be encouraged by more positive results leading into the break. Without their leading man James Maddison in the side, they struggled against Newcastle, and they’ll be keen to prove that they can get results and perform without him.

With four days between fixtures and hopefully any niggling illnesses on their way out, I don’t expect many changes to be made to Liverpool’s backline.

Alisson Becker returned from the World Cup in fine form, alongside Trent Alexander-Arnold (that ball, though) and Van Dijk. World Cup absentees Andy Robertson and Joel Matip will complete the defence.

A return to 4-3-3 seems to be here to stay for the time being, and it’s certainly the formation best suited to Fabinho who put in a solid boxing day performance. He will start the game alongside Thiago Alcantara and Jordan Henderson in midfield, both of whom came off against Aston Villa.

I wouldn’t be surprised, though, if Klopp turned to his younger talent once again at some point in the game, as both Harvey Elliott and Stefan Bajcetic put in good performances on Monday night.

Alex Oxlade-Chamberlain was handed his first Premier League start in 10 months and I’d like to see him rewarded with another start against Leicester. I suspect, though, the manager may opt to bring Fabio Carvalho in for this one.

It’s been another week of Darwin Nunez debate, hasn’t it? I simply love him, because if we can’t relish in the chaos then what are we really in it for? I urge you to watch and enjoy because he’ll almost certainly be starting on Friday through the middle, with the inevitable Mo Salah completing the lineup.

Liverpool have put their cards on the table. They mean business this season and they won’t let it be written off when there is still so much to play for. It’s time to go again, and three festive wins from three would make the table look a lot better heading into the new year.

A very happy and healthy 2023 to all of you, Reds. Thanks for supporting us so relentlessly over the past 12 months, none of it goes unnoticed and we couldn’t do any of it without you.

Football is finally back, so let’s enjoy it together every step of the way.

“Gakpo was being used by Van Gaal as a ten behind a front two [for The Netherlands].” @Knox_Harrington & @Ankaman616 on Gakpo🗣