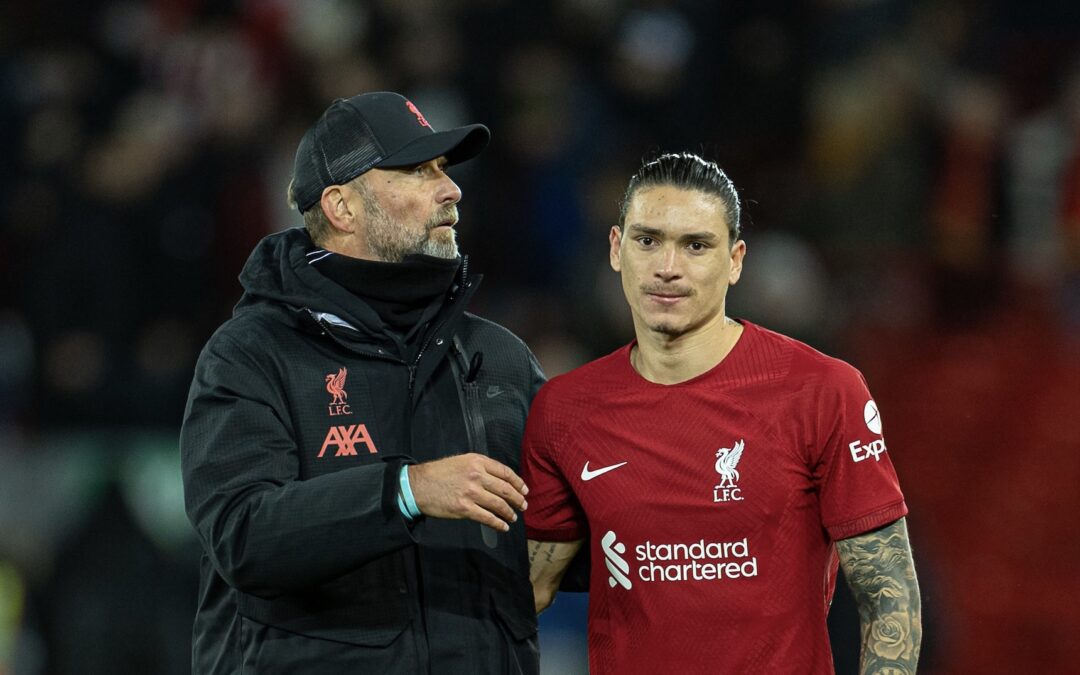 LIVERPOOL were absolutely appalling this evening.

It was staggering how poor they were for the first 35 minutes of this game. Darwin Nuñez aside.

In the second half they didn’t create a great deal, but did manage to neutralise a tidy but limited Leicester side. Darwin Nuñez aside.

Darwin Nuñez aside. He is the most electrifying man in sports entertainment today and he showed precisely why again.

My theory is part of why Wout Faes panics for the first is that he has played 30 minutes against Darwin Nuñez and is therefore not standing for a shout from Danny Ward. He has information Danny Ward doesn’t have whether Danny is right or wrong. He was absolutely legged by Darwin which set up the Salah chance and you don’t forget that sort of thing.

So Liverpool. Darwin Nuñez aside. My word. That was a slog. It was worse than a slog at first. It was a nadir. Other plus points:

– Trent Alexander-Arnold defends the really rather good Harvey Barnes brilliantly. He yet again demonstrates he is England’s best right back if that matters. The world’s best. In fact.

It was the most Gérard Houllier three points since Liverpool 2 Tottenham Hotspur 0 in 2010. When Rafa Benitez was manager. Before then we possibly do need to go even further back.

The Wout Faes brace is absolutely perfect in terms of ways to win this game, 2-1 is perfect.

All this leads me to the point that this, should we get where we want from this season, will prove to be amongst my favourite ever Liverpool wins.

It was dreadful. I loved it. It was reduced to yardage. I loved it. It brought to mind the very depths of the soul and the limits of human endeavour and I loved it. If you want entertainment, go and see clowns. If you want to wonder what the fucking point is, watch this. Half time was Waiting For Godot in sporting terms. We always find something, eh Didi, to give us the impression we exist?

At times tonight you imagine Jürgen Klopp trying to figure it out. Both existence and football. You can see the cogs going round. Leicester manage to chop our passing lanes in the first half. They manage to station four players around Mo Salah, knowing that our weakened left flank won’t benefit as it once did.

Leicester snatched their goal in the first five minutes. A frustrating series of dreadful mistakes, but the loss of confidence is worse than the goal itself. Liverpool go one goal down, but their collective brain is being clouded during the worst parts of play in the first 45. The doubt was existential. I can’t go on like this. That’s what you think.

We line up with two forward flanks, right and left. Thiago the fulcrum in the middle. You can see why it should work. It just happens not to for ten minute periods. Jürgen Klopp waves his arms around and that is frankly not enough.

But that doesn’t really matter because it is 2-1. It shouldn’t be. It makes a mockery of everything. But it is.

And then a second half happens. Nobody comes, nobody goes. It is terrible. But every now and again it is football.

The beautiful game isn’t always that; sometimes it is drop dead ugly but it is ours. Just as the three points are. The lines are so hard for Leicester, they really are, but by the end we have the denouement we want, the one we occasionally deserve and the reminder that it isn’t always wonderful and life-affirming.

Fine. We’ll do life-affirming elsewhere this weekend. Easy peasy. The points and the video will do. Liverpool can’t be as poor again in Brentford but hopefully they won’t be.

Anyway, happy new year. Thank you for reading these words for 12 months. Some were good, some were bad and some were indifferent. But all were for you, so thank you.