With Cody Gakpo A Little Faith Will Go A Long Way 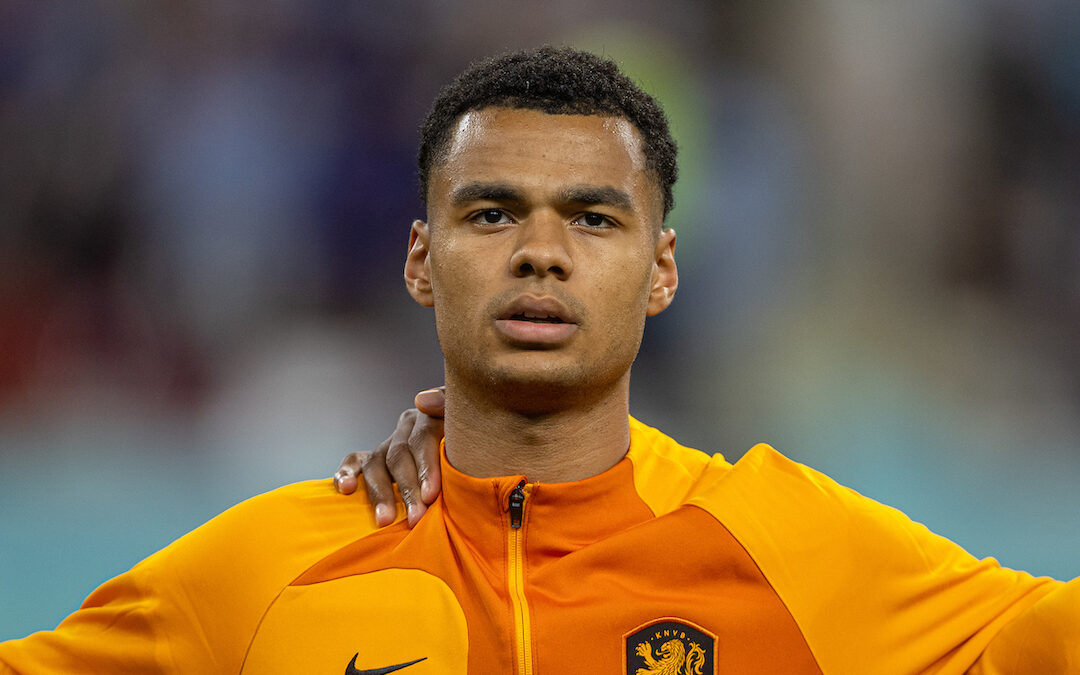 A background on Liverpool’s new signing Cody Gakpo, and how his faith has translated to his personality on and off the pitch…

WHEN we signed Gini Wijnaldum and Virgil van Dijk I said something along the lines of: ‘to know the player you need to know the person.’

Now Cody Gakpo is a Liverpool player I’d like to shed some light on the person.

Cody is from Eindhoven which is a special city in the Netherlands. It’s the birthplace of the company Philips, which started creating light bulbs and led to the city being nicknamed the ‘Light City’.

Philips grew bigger and produced more and more electronics, spurring the development of the city. These days it’s one of the best places in Europe to study engineering. It’s a place of high performance, without losing its down to earth mentality.

This mentality comes up a lot in the contrast between rivals of PSV and Ajax. Ajax has the history and the natural arrogance that goes with being the capital and a special city. Ajax players are called the ‘Sons of Gods’, where PSV refers to themselves as farmers. It’s arrogance versus humility.

Humility is a core quality of PSV. Whether or not it has helped them I’ll not dive into too much. I would say that on the transfer market it hasn’t, PSV has rarely sold well. Pricey assets in Mark van Bommel and Ibrahima Afellay went for nothing and Cody is now their biggest transfer out. He’d ranked sixth most expensive for Ajax.

PSV’s training ground is called the Herdgang, named after the district of the city it’s next to. It used to be on the outskirts of the city, surrounded by the woods, but these days it’s more boxed in between. Every current and former player will always call the place “Gemoedelijk” – a Dutch word that knows no translation really. Gemoedelijk is more than a feeling, it’s a state of being relaxed, calm but not without purpose or order. It’s a good word, say the G as a Scouse C and you’ll be there.

Gakpo’s name is of French origin by the way, so no Dutch G, no Scouse C, just a French “Gakpo”. All of this is important to get to know Cody. Eindhoven and the Herdgang are central to the young attacker’s life.

His story basically consists of four pillars. Eindhoven, Herdgang, family and faith. And as everything the story starts at home. Cody’s father Johnny is a former Togolese international who travelled to Eindhoven via France for love, which is of course the most important reason to travel anyway.

His mother, Anke, is a former Rugby player. A household of athleticism, but also a household that is all about humility, standing up for your beliefs, faith and politeness. Neither of his two brothers, both very talented players too, are known for wild or rash behaviour. They’re all polite, hardworking lads.

He knows where he comes from and doesn’t forget it. Nor will his parents let him forget it. The Gakpo’s are a very grounded family and that reflects in Cody.

His football journey has actually been very straightforward. He started playing football at the earliest possible over here, age four. He joined EVV Eindhoven initially but joined up with PSV within two years and won the league in his first year with the side, being very important to the win.

His talent shone through, even at that very young age. That U7 side had 11 players in it, three of them are current pro players, it was a talented side he grew up with. The U9s scored 280 goals, Cody scores 120 of them and assists half of the rest.

But, and this is not the last time I’m going to write this, it’s not just his ability but his personality that defines him. It’s been at home where his character was formed, but it was at the Herdgang where it became something more.

As his parents taught him, he regularly stands up for the weaker lads in the team. He’s a leader both on and off the pitch. He’s always available to help out others, regularly shows up at his former school to help. Always happy to show up for television duties, never shies away from the responsibility, both as leader, person and player.

Already at a young level he’s eager to learn, determined to become a better player on a daily basis and he’s hungry for more. More goals, more assists, more dribbles, more crosses, more of everything, just more. If he had scored 10, he wanted 12 according to his youth trainer Twan Scheepers, who grew into a confidante of the young player.

As he grew older, some doubt did creep in. The level of competition grows each year. He faces kids from other academies, Ajax, Feyenoord, AZ and they’re very good as well. Other kids around him move up earlier or get picked to train with the first team and he stays behind. He becomes restless and Scheepers manages to keep his head focused.

His parents helped him get through the period. They helped him focus on the joy of football. He was too critical of himself in that period. When he recovers his joy he propels forward. It’s difficult to find a picture of him not smiling. He’s upbeat, grounded, calm and determined – in short, ‘gemoedelijk’. He’s the ultimate product of PSV and Eindhoven.

“It’s his hard working nature, his attitude. Watching him in interviews or how he communicates with the fans – he’s got it. He’s a captain, he’s a leader.”@EredivisieMike on Gakpo🗣

Ultimately, it’s Cody that pushed himself to the top. He learns to relish the challenge. He wants to test himself and it works out for him. He signs a pro deal and plays for Jong PSV, trains with the first team and goes a bit back and forth with minutes.

He won the league with PSV in 2017-18 playing around 80 seconds for the first team. From there on he’s on a steady upwards trajectory. His eagerness to improve, to learn and combined with his talent and physical traits turn him into the Eredivisie star he is today.

It’s perhaps his biggest trait, his personality. Especially off the field, his calm and jovial demeanour shines through. He’s mature and seemingly wise beyond his years.

His surroundings have helped him shape it, but the last step has been his to make. Gakpo is big on his faith. He attends church very regularly, but it doesn’t stop there. He loves reading the Bible a lot and by his own accord he often discusses the scriptures with his friends and other members of his community.

One of the people he professes his faith with is Memphis Depay. Depay has not been as vocal about his faith but turned to the Bible later on in his life, only a couple of years ago. Together during the latest World Cup and in the midst of the storm they brought peace and calm to the squad.

No less than 15 players of the squad found themselves sitting together and professing their faith, discussing Bible verses that fit their situation. Dumfries had a poor group stage but had a great game against the USA. After the game he spoke at length about the gatherings that Depay and Gakpo organised, and Dumfries credited the boys for his renewed view towards religion and the effect it had had on his form.

Virgil is rumoured to have been one of the 15 attending. Virgil and Gakpo have been close during the World Cup. The best part is that the session was open to everyone. Religious, non-religious and non-Christians too. Everyone was welcome, everyone’s opinion valued.

That defines Cody. He came out in defence of his goalkeeper and was adamant that his mistakes were down to him too. Everyone shoulders the blame, everyone basks in the glory.

“I spoke to a journalist who said unlike quite a few players who have left PSV, Gakpo’s choice to stay a little bit longer has seen him develop into a leader before moving.”@Ankaman616 on Gakpo🗣

What we’re getting with Cody is the full package. His demeanour is friendly, jovial and you’ll find him usually smiling. He’s a leader that doesn’t shy away from his responsibilities. He has spoken about the fact that a familiar face bears the burden to show goodness and set an example. He’s put his money where his mouth is.

His approach to his profession is extremely professional, and he’s eager to learn and willing to accept that he’s not there yet. He has worked with a coach outside of PSV to improve his decision making and overall game. This has resulted in a higher output and less injuries. He’s tactically very aware of what happens on the pitch and is happy to help a teammate out.

On the pitch we’ll get a beast of a player.

What annoys me over the years is that Manchester United always found players that could shoot incredibly well who could score out of nowhere. Once it was Rooney and Ronaldo, then we moved to the even more annoying Martials and Rashfords. Definitely not top players but still scored goals they had no right to score. Just cut inside and hit it better than they deserved. Just because of their shooting ability.

We get one of those with Cody and that’s just very nice to have. He loves to cut inside from the left to find the lower right corner. Why the lower right corner? That’s the most difficult corner to protect from his move, takes the goalkeeper the most travelling time, so as long as it’s on target it has a high chance of going in. It also gives Mo Salah the chance of a tap-in, which is something Gakpo took away from the individual coaching he received.

Much has been said about his versatility as a player and the positions he can play in, but that’s perhaps a bit too much wishful thinking. It’s true that he played several positions at the World Cup and he scored in the group stages with his left, his right and his head, but it’s not like he did that loads for PSV.

Louis van Gaal had sat down and explained he was going to play with two up top and a 10 behind, with Depay on the left side of the two up top. He’s a natural winger that loves to shoot with his right, but is perfectly capable of going around the defender and delivering a cross with his left.

We’re getting the full package with this fella. He dresses sharp, he’s got impeccable skin and I bet you he also smells dead nice too.

So, as Cody himself proves, a little faith will go a long way.

“Gakpo was being used by Van Gaal as a ten behind a front two [for The Netherlands].” @Knox_Harrington & @Ankaman616 on Gakpo🗣