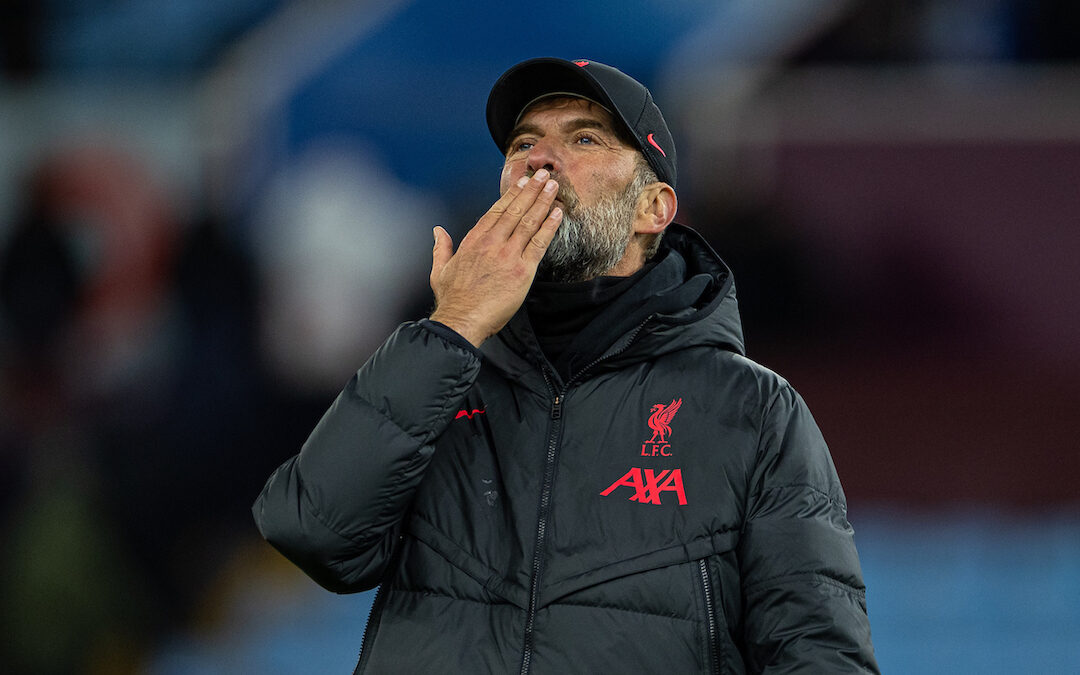 YOU do this thing.

You say that it isn’t really about the football itself. It’s about all the other stuff. About seeing friends. About a sense of civic pride. About the intangibles, this thing.

And then Trent Alexander-Arnold plays a pass you couldn’t see from the upper tier. He plays it with a slice and it elicits a gasp, because no one else who is there for the other stuff as well has even got near to seeing it. The run. You don’t see the run either from Andy Robertson and then you definitely do see Mo Salah and then you realise that no other set of footballers on the planet could have scored that goal better.

Perhaps one or two other sets of footballers could have scored it as well. Perhaps. But no one could have done it better.

The transition team takes a big step into the future, as Jürgen Klopp backs the young to carry Liverpool up the league after a poor first half of the season.

Darwin Nuez can’t buy a goal for the second game in succession, but Liverpool take Aston Villa at Villa Park, three goals to one. Darwin is just electrifying and terrifying. He transmits himself as though one of the cartoons from ‘Who Framed Roger Rabbit?’ is just dropped into Liverpool’s frontline, he’s the most alive man on the pitch and he simply doesn’t stop.

He’s also young. So is Stefan Bajcetic. As is Ben Doak.

A way for us all to be happy is to see this new Liverpool team emerge. It is to see our future open up before us. We were beaten by Manchester City, and we are far from perfect against Villa, but we all understand why Stefan Bajcetic comes on. He shows bravery, and his determination is rewarded with Liverpool’s final goal on the 81st minute. He settles the argument and ends what had been a period of uncertainty as Villa resurgent had bossed the third quarter of the game.

Ben Doak (17 years old for the love of god) comes on right at the end, but looks every inch the future. He joins a long line of Scottish Scousers, and if he runs at defenders like that for the next half of the season, it won’t just be Scotland’s current captain on the pitch at Anfield who will be pleased, it will be all of us.

The game had two halves. Liverpool withstood the basketball first 15 to dominate matters and build on their beautiful swoon of an opener. Jordan Henderson repeatedly plays the ball early and throughout the whole half Trent Alexander-Arnold and Andy Robertson seem determined to show the World Cup what it was missing. Sometimes a crossfield pass has a beauty all its own, but they always take two to tango.

The shape is fascinating. Alex Oxlade-Chamberlain is the key cog shifting Liverpool between 4-4-2 and 4-3-3 out of possession while Liverpool’s desire to go direct causes havoc for Aston Villa. Liverpool looked slick through the first half. Thiago was cool and passing well. Fabinho won his battles and moved it. Mo Salah played as well as, well, Mo Salah can.

The key goal, the goal that offers Liverpool the buffer comes from the corner. In trying to hustle Virgil out of the way, the Villa players manage to place Van Dijk in just the right spot to strike the ball beautifully like the finest forward. It’s a lovely goal and it offers Liverpool something they haven’t had this season away from home – a deserved cushion.

But Aston Villa break out of Liverpool’s controlled passing and big passes as they come out after half time, and there is no let up even once Olly Watkins has earned a deserved goal with a great strike around the 60-minute mark. Watkins was excellent for 90 minutes. He is such a difficult opponent to face because he understands where space is and how to exploit it.

That Villa comeback is telling about this Liverpool side in this moment; they aren’t perfect. At times they look disorganised in defence – it is never nice to see Virgil Van Dijk not fully in control, but on the other hand I love it when he does some mildly panicked defending. Indeed, all of Liverpool’s defenders defend well in their individual moments. It is, as a whole, where Liverpool are rocking second half. They offer encouragement, but at least do so while the scoreboard is on their side.

Aston Villa are better than their performances under Gerrard, and they are, second half, determined to show it. From Mings to Watkins, they want the ball. They really trouble us for 35 minutes. You can’t keep John McGinn out of the action. However, then you can’t keep Stefan Bajcetic out of it either. He sashays with certainty. He shakes his young hips. It’s more gorgeous, more of the football you turn up for.

It is a statement of intent. It is a show of strength. It is a surety of touch that Jürgen can still rely on to build a team out of.

Not the end but another beginning for us, for you and I. It is always about the football but it is also always about us, and I wish you could have been there because I reckon everything is always new beginnings.

Isn’t that what we all want at the end of the year?