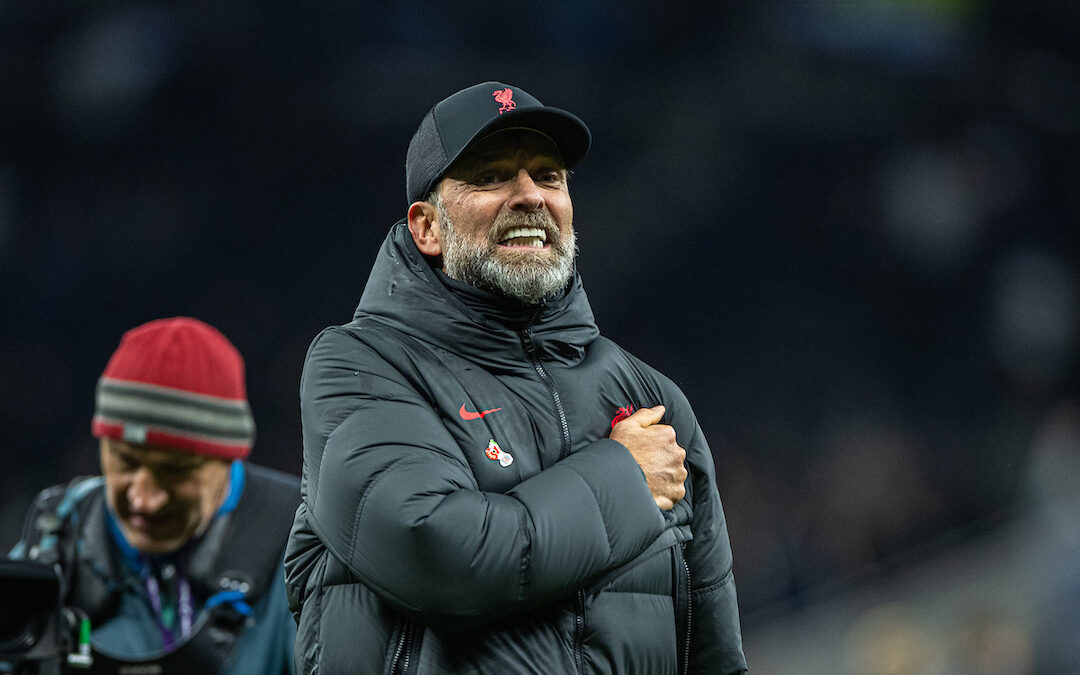 LIVERPOOL were a ride, but Liverpool get lucky.

Before a ball is kicked Liverpool get lucky, for the first time this season — the fixture list works for us. This is a good time to play Tottenham.

It becomes holding on. Let’s do the end first. Liverpool are nervous last 20 and that is understandable. The three points is massive. No away wins all season is massive. Being 0-2 ahead is massive. Dropping too deep, being too nervous is perfectly rational, but Liverpool mostly do the wrong thing well which is a way of playing football. It works much more often than people think.

There is a football thing where supporters and participants feel differently at this stage of a season. Supporters find themselves wanting the right way done well. But the participants know that the job of autumn done well gets us a winter in it which gives us a spring. Today was much more than that — big away and these in this moment and us in our moment.

Seasons are graft and today becomes graft. I wanted Liverpool to make it three because they could have made it five. Tottenham are made of vulnerabilities oddly and Liverpool could have exploited that.

Salah though. My lord. They are two great finishes and the graft is astonishing. He shows and shows and shows. He’s among the best men alive. He’s committed to our cause in such a way.

Trent Alexander-Arnold has to put one hundred and fifty per cent in every game. One hundred isn’t enough. He was most exposed today by his own team but he played three passes today no other footballer on the whole planet could or would play. He’s the best, you know. He’s our man.

Ibou Konate was tremendous. He wants to win everything and wins almost everything and he has such presence. He pushes Liverpool right up by virtue of his existence. Andy Robertson starts higher and does brilliantly. He works past three for the third consecutive week — it’s a level of performance close to the skies.

The second half isn’t our half. Kane’s consolation is some finish. You know how good he is? How good a few of theirs are? This is a good side.

Seeing things out is a big bit of the battle. But putting ourselves into that position is what we have lacked. Not today. Liverpool massively improved on the road.

Tonight I love them but, as discussed last week, we love them regardless. You know they will be our lads. They really will.

We get to watch them twice more in our place next week. Two more wins and then we see. Liverpool a ride. Liverpool, please stay lucky. Two wins.

These will do for me, for now. Our boys, every single one. Nothing else makes sense.