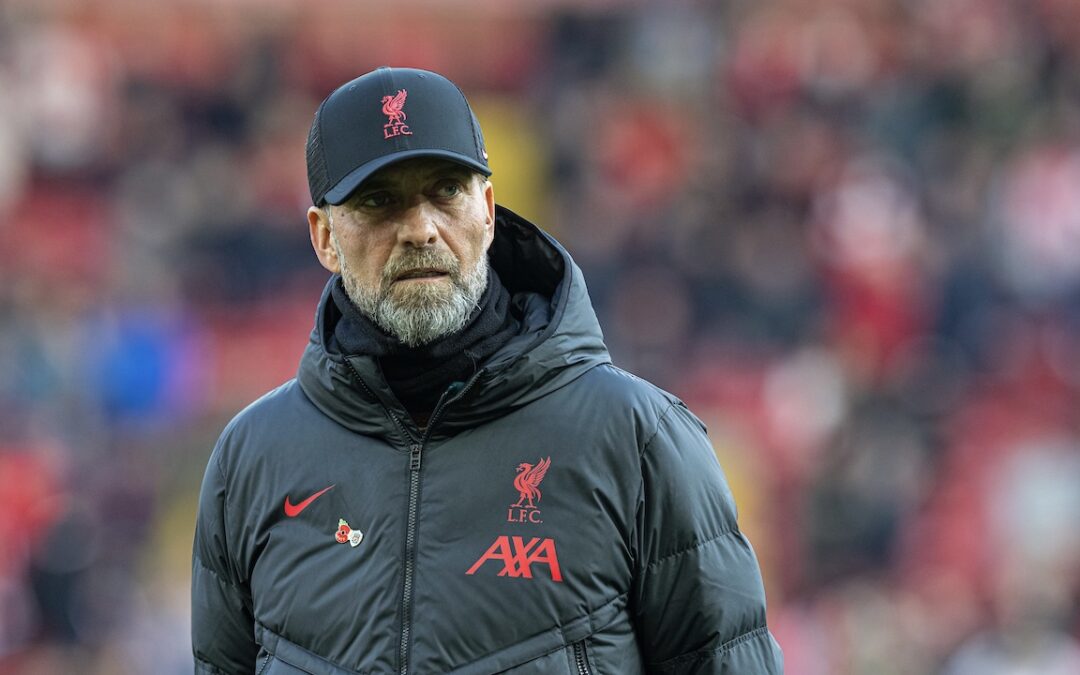 Not what we wanted from the Community Shield onwards. When Brentford scored on my way to Anfield a kind man would describe my reaction as “rueful”. A less kind man may say “bitter”.

But while it hasn’t been a blast you still love them. Love the lads who did the things we had needed someone to do for 30 years. Crucially, love all the lads who will do all the things for the first time.

That is one of the core things to take from when it hasn’t been a blast. Darwin Nuñez has been the thing to take. I’ve been amazed he has in any way, shape or form been debatable

It’s felt such theatrical nonsense, a rhetorical waste of time and energy, an excursion too far from the clicks economy. I understand the clicks economy, I am occasionally a tiny part of it. But Darwin Nuñez has been way beyond it.

He is both of the theatrical and far beyond the theatrical. He is technicolour, 3D, HD, 4K, AR. He is Roger Rabbit and all of his critics are Bob Hoskins. He is Beyonce, he is The Rock, he is Paddy Fitzsimons on karaoke. He’s too much – he’s Bette Davis: it’s the takes that got small.

He shows all that today. He is the match, not just man of the match. He is a unique proposition, but today shows both the unique and also the mundane done well. He brings his teammates into play while bringing the crowd alive. He wants us in it, wants our adulation. He just wants to feel real love.

Harvey Elliott showed again with the ball what he could do for us. He draws fouls, shifts it quickly and finds space. The ball for Nuñez’s first is sumptuous.There remain questions about when he doesn’t have the ball, but we can have faith there will be answers.

The goalkeeper is incredible. It’s strange – he makes two great saves and a third which is amongst the greatest I have ever seen, but it doesn’t feel like he wins the game for Liverpool. This may be unfair but it shows a sudden return of faith in Liverpool in the period where it hasn’t been a blast. We were always winning that game.

But, good lord, does Alisson Becker help. And he makes, from a Che Adams header, one of the most incredible saves I have ever seen in person. Today, I saw genuine sporting brilliance. It’s hard and odd to explain, but Anfield went oooh and purred and then stood afterwards.

For the rest, Mo Salah was excellent and should have scored and should have had a penalty. It’s a strong examination of the idea of clear and obvious afterwards as well. Roberto Firmino had a good hour and that may well be the sentence from this point. Everyone else played their 6.5 to 8/10. There hasn’t been enough of that while it hasn’t been a blast.

Indeed, there’s a lesson there. We haven’t needed exceptional, in that exceptional will come with a base. We’ve needed the base. The desire for a load of lads playing 8s and 9s is understandable, but it isn’t what has brought any team to the party ever. What has done that is a solid base and then players taking turns to hit the heights.

And it hasn’t been a blast. But it has been the thing we have shared after all the different type of exertions last season. This is what all being in it together means – we aren’t all in it together when it is the best of times. The worst of times exist too.

I’m ready for a break, not simply for the idea of letting time pass or resting or absence making the heart grow fonder, but for the idea of coming roaring back no matter what other, sudden, exterior factors may or may not occur. Big days, big nights, everything possible.

It hasn’t been a blast, but it has been ours, so thanks. Enjoy the absence. Expect to see you back at your best in a few weeks. Expect to see us all make it a blast.

“Nunez really enjoyed himself, the relationship between him and Mo is really coming along.”

“It’s got all of the ingredients for an amazing partnership.”