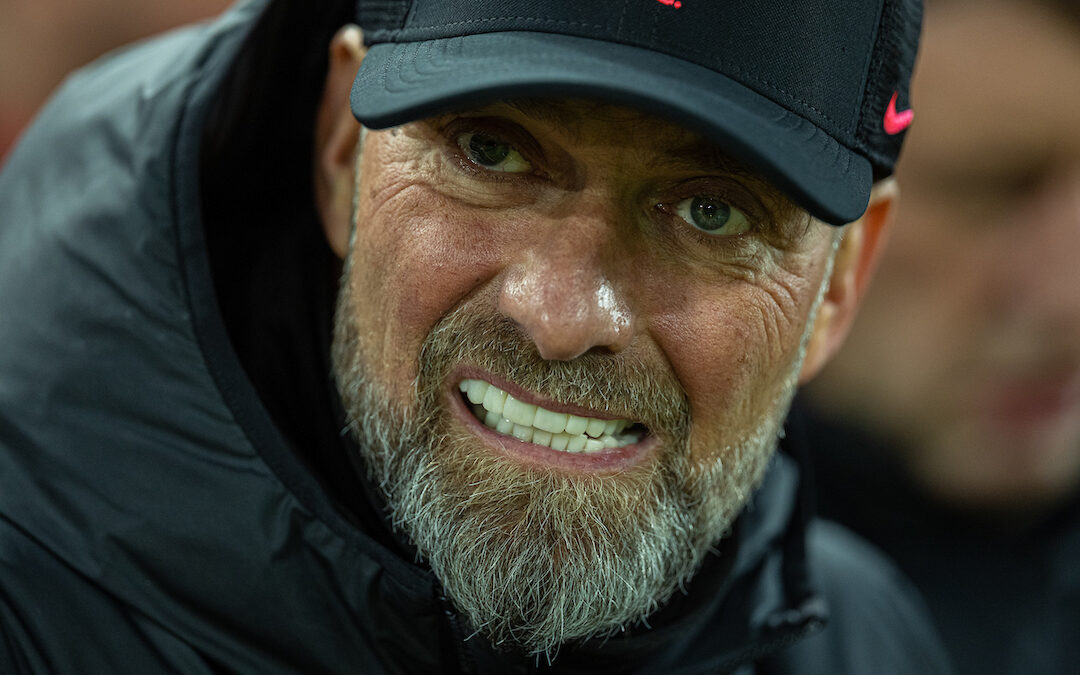 IT’S League Cup night at Anfield and all the kids are here, in the stands and on the pitch.

In the Grand Klopp Transition plan, these lads may feature some way into the future. But tonight is their lucky night as opportunity knocks against Derby.

We are all desperate to see something, some flash of genius, some grace, some skinny wonder come to take our breath away.

Come on, Liverpool, come on. Cometh the hour. But we forget easily — in the past it has been a Divock Origi or a Taki Minamino or, if you are old enough, a Florent Sinama-Pongolle.

No Divocks are available. So someone else has to step up to find their way into the 90s per moment conversation. Tonight Caoimhin Kelleher adds three more to his ratio.

An upfront three of Melkamu Frauendorf, Layton Stewart and Fabio Carvalho and a midfield in which unlucky general, Alex Oxlade-Chamberlain, is the experienced hand looks enthusiastic, anyway. The attacking formation takes Derby on. And for the first half, what they lack in direction towards the goal, they make up for in pouncing towards the ball, not giving up and learning to find each other on the pitch.

It is all OK. Kelleher isn’t troubled. Joe Gomez is there at the back to mop up mistakes and chases down Derby’s number nine. Gomez never fails to get goal side. But we all want more than this, really.

Come on, Liverpool. Come on.

We want one of the lads to find the goal. The goal. Derby play five at the back and Liverpool stretch the play then pull back attempting to find a route for anyone of the six outfield players crossing around the box. Oxlade-Chamberlain nearly powers one in. Carvalho nearly tricks his way in. It nearly works. But no. They don’t know each other well enough. There isn’t quite enough bite in the passes. They work hard, yes, but this game is a gaining of experience not the product of experience. We want to see them do well.

Come on, Liverpool, come on, come on.

Tonight is one of those rare examples you get in football — what does being good look like with no cutting edge and no focal point? You often think you have seen that. You’ve seen Milan Baros or Marcus Bent or Timo Werner, pick what could be considered your poison. But they can all draw defenders. They have to be worried about constantly.

All of Liverpool’s starting front three would have looked better had there been a focal point, had there been cutting edge. Had there been Divock, not for the moment but for the shape. We often say young players look better with more experienced heads around: Calvin Ramsay and Stefan Bajcetic had that — Bobby Clark a little less so and the front three significantly less again.

But all forward lines need at least one capable of being the forward. The absence denudes everyone’s capabilities and makes it harder to build around.

Oxlade-Chamberlain plays relatively well given he hasn’t played football since March. Some of you may not like that sentence. It isn’t saying “build the midfield around him”. It is instead saying that he showed maturity and played the game’s best ball. Harvey Elliott should score but that’s alright — he scored when it mattered most.

The old hands arrive on about 65 minutes. Firmino’s name rings out and he runs on to the pitch. Yes. Sort this, Bobby. Some of the kids in the stand are going to get bollocked by their teachers tomorrow if you don’t. It’s way past bedtime for all concerned. Darwin Nunez and Elliott brighten things up but no goal. We can all feel it coming.

Ben Doak arrives and is that skinny love, that whip and pace and your heart pounds there but he can’t quite find it either, not the final part. The penalties approach, the drums pound.

Caoimhin Kelleher smiles on the goalline. Name the cup after him. Name something after him. He’s the coolest cat around. Then there is Elliott and there is joy and there is a fourth round before Christmas. Let it be at home, Christmas week. Never have I wanted a home draw more because by then I will have missed you so deeply through the rainy, pouring days and cold nights. You and me. Automatically sunshine.

And they do. They do it. The kids kick balls at the net and Moments Kelleher pulls it off again.

If you are going to play for Liverpool, best to learn these things early. You don’t need to be perfect. You just have to win.

All of us learn that same lesson again too. The future is uncertain. We have no idea what is coming. But we will see in it things we recognise. We will see potential. We will know what we want. Come on, Liverpool.

Come on. One more before the big, obnoxious break. And then whatever we want thereafter. The future is uncertain but the manager backs his people and we back him and he only wants one thing…

To make it red no matter what, where or when.