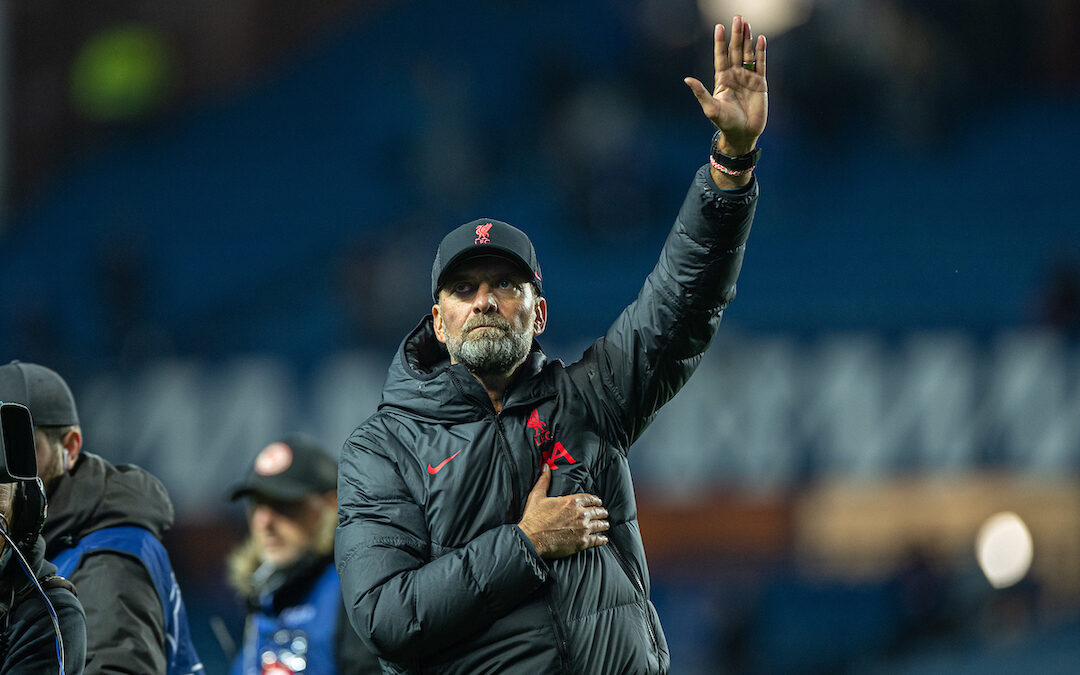 AN actual game of two halves.

You don’t get as many of them as you’d think. Sometimes the scoreline suggests there has been one. But how often is that ever really the case?

On this occasion though, first half Liverpool were ponderous, had poor starting positions and lacked cut and thrust. Simultaneously Glasgow Rangers were front footed, certain and powerful. Liverpool seemed second to almost everything, not through not wanting it enough but through not being in the right place and having the right instincts.

Take their opener in this context. Fabio Carvalho needs to be sharper and his touch needs to be better. Then Fabinho needs to have a starting position and instinct closer to the idea there is danger. All three of Ibrahima Konate, Jordan Henderson and Joe Gomez are slightly in the wrong place. But those three plus Fabinho make up two thirds of your outfield defensive unit in terms of proximity to the goal. Rangers score and my god, you just think “not again”.

The equaliser will have Giovanni van Bronckhorst up the same sort of nights I have been since the second Arsenal goal. What a terrible goal to concede as an equaliser as the fourth seed at home to the second seed in your Champions League group. It’s almost the dream corner goal. Why aren’t all corners like that?

But it is Roberto Firmino scoring it, the same Roberto Firmino who was Liverpool’s best player through that first half and therefore on the night. Firmino revelled in Ibrox. He was exceptional, first to everything he should be first to and some other bits as well, repeatedly carrying the ball away with aplomb and finding his teammates. His brace was more than deserved.

The brace with a lovely assist is almost the pure Roberto Firmino performance but Joe Gomez contributes brilliantly in the whole of the first 15 of the second half. He was suddenly positioned differently, was first to everything and played two lovely balls in quick succession. Firmino, though, backs him and backs the situation. He basically turns into John Aldridge and makes the Aldridge-esque run — takes up the poacher’s position. It’s brilliant number nine play.

And then he lays on the theoretical number nine for a glorious finish and the game is Liverpool’s. They improve markedly in the second half. They’ve had eight shots by the hour mark when they only manage three in the whole of the first 45. Glasgow Rangers are finished and Ibrox begins to empty because they know their goose is cooked.

Mohamed Salah then expands that. It’s a remarkable display of finishing that comes from nowhere. He loves a midweek off, Mo, around this time of year. You’ve seen this before. It’s one of the things I most love about him, the way he is from the bench. He never carries it negatively. To score three in six minutes, to score that three in six minutes, shows just how special he is and why we were so overjoyed to tie him down.

It’s hard, at times, writing these things because he is my favourite. Keeping a rational view is difficult when all I want to do is list how wonderful I think he is. He is the best one I have ever seen and he may well prove to be the best one I do see. What a thing.

And then he captures your heart again in a different way with Harvey Elliott on screen when Harvey’s goal is about to be given. One kiss is all it takes.

Elliott was bright as a button second half and the goal is his reward. Diogo Jota gets three assists and I’d like him to have netted as well but it isn’t there. Fabio Carvalho drifts in and out but he doesn’t flatter to deceive and that will be the most important thing for him.

Through the game, Fabinho passed the ball forward well. It was great to see Andy Robertson. Thiago Alcantara lashed in a million tackles for practically no reason but seemed to have a lovely time, like a weird ball-playing seal.

Tonight is significant as much because of what happens in Naples. Liverpool need one point from the remaining two games to qualify. Which is always the least you can ask. The overall Champions League picture, half time — it’s maybe never as bad as you think. But Sunday looms large.

However, tonight can be tonight at least for now. For now we can have February ablaze; all I want is to be on the march when winter turns to spring and when spring turns to summer. You can only lose seasons as autumn turns to winter. We’ll have none of that here, thank you very much.

At worst, we’ll have an actual season of two halves.

Reaction podcast after Rangers 1 Liverpool 7 in the Champions League at Ibrox. @johngibbonsblog hosts from the away end in Glasgow…