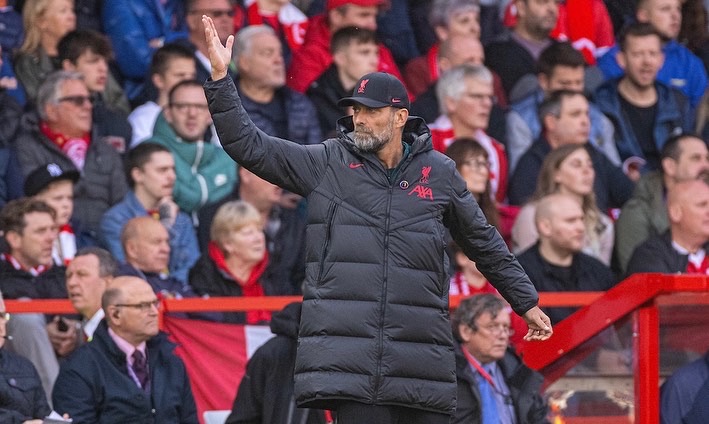 Today, the glass was broken and the orchid was trodden on and Liverpool only really have themselves to blame.

They weren’t ever appalling but they were just so flat at all stages, there was no exuberance. Everything looked like graft.

The idea of rising above seemed unthinkable. We dragged ourselves down to our level. And beat ourselves.

Liverpool’s problems against Nottingham Forest today are legion. Everything goes wrong. Forest have desire and luck, but Liverpool shape that luck for them. We make this their lucky cup final.

Liverpool have no marginal advantages. Balls go awry, chances are missed, players are out injured, the punishment is a Nottingham Forest goal that comes not so much against the run of play, but following the run of bad luck and moody attitude covering Liverpool Football Club.

The best Liverpool player is Alisson Becker. Not just because he makes excellent saves, but because he survives the rugby tackle from Forest’s defenders as he surges forward to try to get the ball in the net at the end of the game. None of these players want this result. The disorganisation is not their fault.

The system then. It is understandable why Liverpool persevere with the change of shape but who, today, does it help? It is easy to envisage one slight shift, one different name on the teamsheet, one click into 4-3-3 and Liverpool look more robust.

The circumstance. It is three games in seven days, as tight as it gets. The injuries have indeed been mounting up. It is do or die for Nottingham Forest. I am prepared to feel sorry for Liverpool to an extent. The other circumstance though is the rest of the season to this point. Want to deal with this? Win against Brighton. Beat Crystal Palace.

The poor performance. The concern is this – Liverpool were poor in the round and in moments. Fabio Carvalho’s touch is sublime but, having made it, he should score. Virgil van Dijk should also score. Various Liverpool players get to the byline. More should come of it. Joe Gomez gets caught. Fabinho doesn’t track. Moments.

But in the round, the shortcomings are significant. Space is everywhere, everyone is narrow when narrow isn’t an option. The one more ball isn’t there. In the round, Liverpool aren’t good enough because if they were we’d be able to consider their goalkeeper a clear MOM rather than him in competition with ours.

It wasn’t a sucker punch. That’s the point. It wasn’t as though it was coming but Forest aren’t getting out here in stripey pyjamas with a bag of swag on their shoulders. A draw could have been a fair result. They started the day 20th. That’s a concern.

Concerns abound. A result Wednesday helps and building on the home form helps. Getting to the World Cup helps. But today hurts.

It needs to be better. In all circumstances.