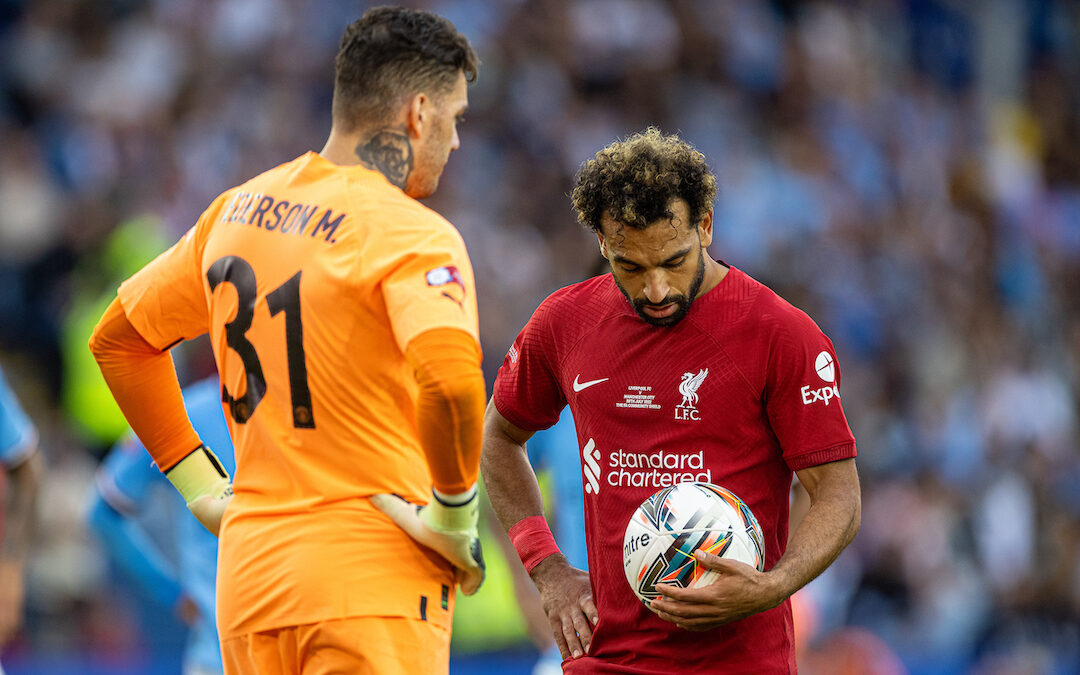 The Anfield Wrap’s match preview before Liverpool v Manchester City in the Premier League at Anfield, where a win would answer questions…

For those looking, these seem to be the four most-used reasons for Liverpool’s poor form this season. That’s if you ask fans, at least.

Jurgen Klopp may entertain the idea of the first two points, but is less likely to entertain the other two — likely to not allow for excuses or give opposition a sniff of an edge over his team.

Investment will always be a conversation at Anfield, as it has been even when The Reds were at the peak of their powers. It becomes even more stark when they aren’t — should they have done more when they were to stop this kind of thing? The manager can go back and forth on this, and did so this very summer.

Confidence is a fragile thing and can be lost in mere moments on a football pitch. Again, Klopp will generally go back and forth on this, as his players seem to have this season. Generally, they’ve looked like a team trying to play with more confidence than their form and performances should allow for. Too many steps being taken at one time.

The fatigue, physically and mentally is of course a factor in this day and age. In fact, the manager would be more than happy to suggest that there will be fatigue from the amount of games they are being forced to play, but he’s less likely to use it as an excuse for poor form — particularly when questioned about last season’s slog and ultimate disappointment.

The shape, then. It is almost the most common question Klopp is being asked these days, so it’s no wonder his press conferences have almost become a platform for tactical insight. He’d probably like it that way if the questions weren’t framed negatively about a poor run of results.

On Friday it centred around Mo Salah and getting the best out of him, after his six-minute hat-trick in midweek against Rangers. Bringing the Egyptian on to play down the middle may have just left Klopp with a few more questions to answer.

These things are never black and white, but a possible solution to my mind would be to play the in-form Roberto Firmino through the middle against Manchester City. His propensity to drop deeper will allow Salah to come inside more and interchange, while it will also benefit Diogo Jota who will hopefully be ready to come back in from the start on Sunday.

In midfield, he could utilise Harvey Elliott to give him tactical flexibility, pivoting between being the right-hand side of a midfield three and a slightly advanced three in a 4-2-3-1 — where Salah could move further up the centre of the field. Fabinho and Thiago Alcantara starting as the other two central midfielders would allow Elliott more freedom to roam.

Ibrahima Konate wasn’t pictured in training Friday, but as long as he trained Saturday he should be fine to start on Sunday — we saw similar with Thiago recently. If so, he’ll partner Virgil van Dijk, with Joe Gomez at right back and Andy Robertson returning on the left. All five of them, including the goalkeeper, will need to be at their absolute best against City.

In truth, the whole team will need to be at their best. Whatever the shape ends up being, there’ll be little to no room for error. Fatigue will be felt by all later in the game, but this is a big enough stage to power through that with the reward of a huge three points in mind.

There’d be no better way to re-establish confidence than with a win, and this is the kind of game they can be forgiven for playing it a bit more simple in. City have been the benchmark in terms of investment and points, but our form makes this feel like something of a free hit.

No excuses now, Reds. A win would give us some moves, which is all we can ask for at this stage.