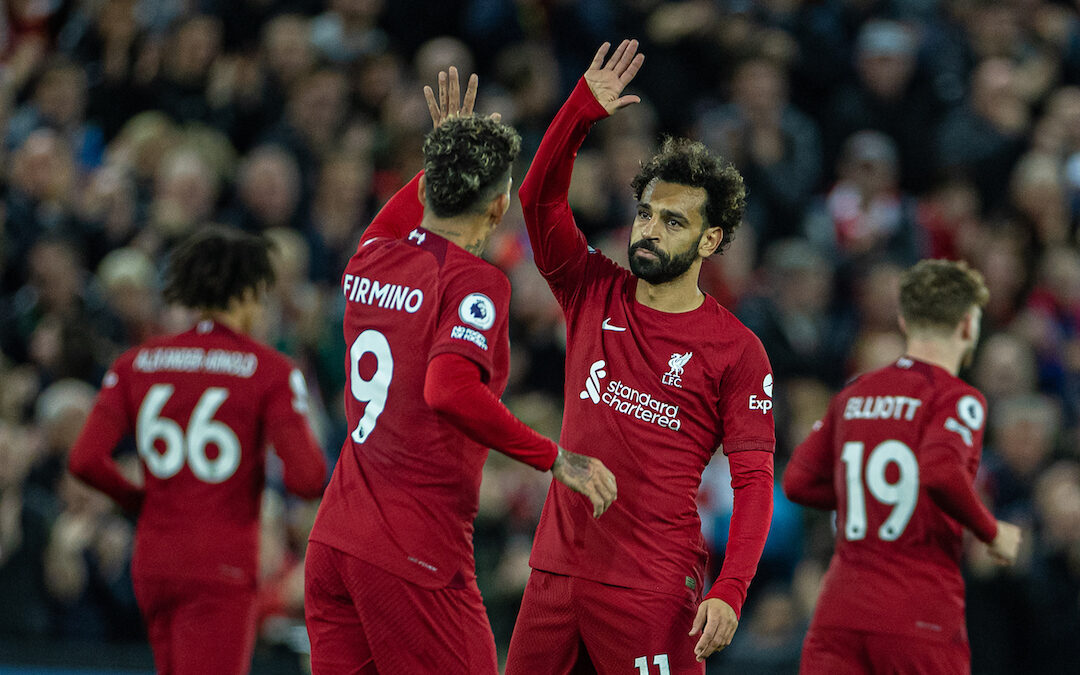 With progression to the Champions League knockout stage secure, Liverpool should have been celebrating – instead they’re commiserating again…

THEY said I don’t have to bother with the footy this week and instead I can talk about the release of the Super Deluxe Revolver album by The Beatles.

We all fine with that? Good.

It’s a beauty too! Snippets of conversation from the orchestra while they work out just how much string vibrato to use on Eleanor Rigby, John gradually sorting out Tomorrow Never Knows before our very ears and early demos of Here, There and Everywhere — Paul McCartney’s favourite song by Paul McCartney.

It’s glorious for us Fab Four anoraks and its appearance was the highlight of my weekend. It had to be, really, given what followed.

My Saturday wasn’t great. All in all, I spent about 11 hours on the road to watch The Bootleg Liverpool FC deliver a 90-minute set at Anfield. I’d paid to see the real thing.

I didn’t think I could get angrier after Forest. If there’s one thing I want to see, it’s Liverpool destroying Nottingham Forest. It was the only good thing about them getting promoted in the first place. In the summer, I did one of those pre-season prediction things and when asked who I thought might go down, I put them in all three places. Forest and I don’t get on.

That game wasn’t supposed to be competitive. Their only hope should have been mercy. Actually, it wasn’t the least bit competitive. We were abject, We went out, felt a bit sorry for ourselves and crept back onto the coach, hoping no one would notice. I was still shouting at them three days later.

But Leeds? We beat Leeds. Liverpool Football Club beat Leeds United. That’s a given. What’s more, there’s precedent. It finished 6-0 and 0-3 last year and all things pointed to a similar outcome given Ajax. 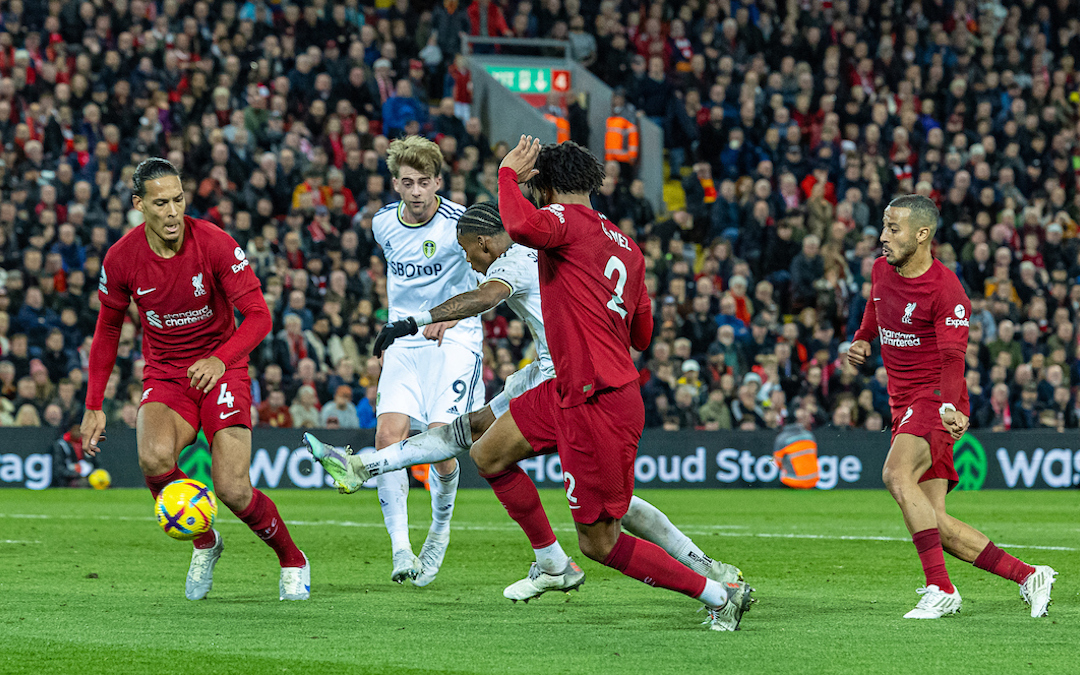 That game was encouraging, despite doing all we could to give them a goal start. Slowly but surely, we worked out a system to suppress their attack and got behind them. Ajax are better than Leeds so surely Saturday would be a cakewalk compared to the first half hour of the Johan Cruyff Arena.

I don’t know where Joe Gomez has the confidence to think he can play a blind ball to his keeper after five minutes when their first directive is not to go behind early.

I don’t know what the plan was for the midfield either other than to make the left-hand side of the pitch a sort of No Man’s Land, and God knows what happened to the entire team in the final minute when their lad is at the corner flag surrounded by red shirts.

I sit in that corner this season and was more frustrated than panicked. I saw at least three ways we could win the ball and get it up the pitch. None of them involved watching it move inexorably to our goal line with no intervention from us. For the pressure we put on the ball he might as well have had a shot from the touchline.

It’s hard supporting Liverpool. It shouldn’t be, but it is. Sure, there are fans of other clubs who don’t get the highs or even the lows we do. They’d love to be ninth in the Premier League, but they’ve known neither our joys nor sorrow. They can see when the Emperor has no clothes and point at him accordingly.

Our view (or mine at least) is always tempered by the knowledge that this side has performed miracles over the past four seasons so it seems harsh to turn on them. After all, if the National Lottery people turn up at your door to give you a million quid, it’s a bit churlish to complain when they don’t come back with a second cheque.

We might be terrible right now, but there’s always an afterglow of what’s come before and it still needs thanks. But the Forest and Leeds performances need calling out. They need calling out loudly. 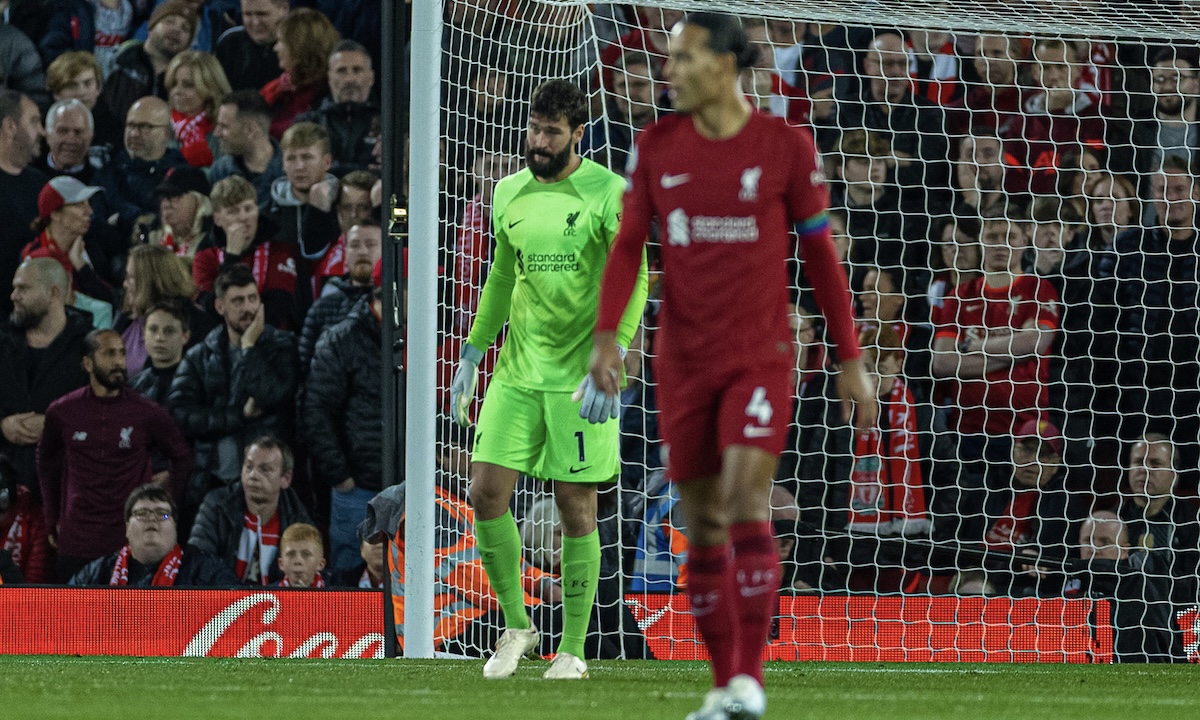 Jurgen Klopp looks as dumbfounded as the rest of us and though he will always have our support and calls for his head are ridiculous, some of his decisions are downright baffling. James Milner on at 1-1? Trent off but not Roberto Firmino? Curtis Jones?

And where was the energy? You go a goal down, get yourself back into it and then batter them in the ground to destroy all hope. That was the script, but we had other ideas. Liverpool played like they were apologising for getting in the way. Again.

There are mitigating circumstances, of course. It’s absolutely criminal to sell three forwards in Sadio Mane, Taki Minamino and Divock Origi and replace him with just one man. The team are getting older and nothing is being done. We bring in a lad as an emergency panic buy and he’s played only one more game than Jay Spearing this season.

FSG have memories like the rest of us. They were here during the Great Lost Centre-Back Crisis of 2020-21. Remember when they all got injured and then the midfielders who replaced them got injured too? We. Get. Injuries. Even they, with their limited grasp of the game, know that.

One of our signature traits is to run the opposition into the ground — a concept which usually comes with muscle injuries and exhaustion. Tell me Fabinho’s happy with that strategy and that he might have to play against Derby County, because Jordan can only play more than once a week and Stefan Bajcetic has only just reached drinking age. Maybe Jay can fill in.

I can’t get onboard with an ethos which allows for a year off when everyone gets too tired or too old. I get that we must have the right player rather than a scattergun approach, but we also need a squad. There has to be continuity. The players have my sympathy there. Oh, I was shouting at them on Saturday like everyone else but they don’t half need some help.

We can’t have this side crash and burn for the lack of support. They too should be allowed to become a Super Deluxe version of themselves rather than allowing them to go out with a whimper because of some Bostonian husbandry.

Revolver was followed by Sgt. Pepper – arguably their finest album (it isn’t). This Liverpool side are staring down the barrel of Be Here Now and no one needs that. But the players shouldn’t be given a pass either.

They should always be battering Forest and Leeds. Always.