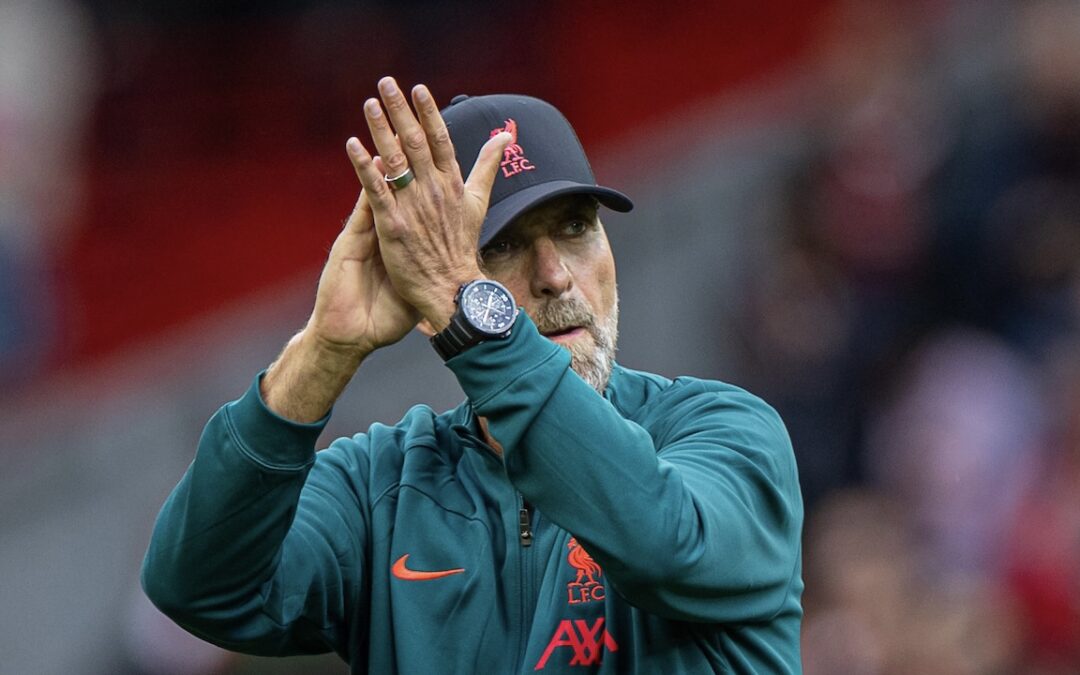 I AM at my wit’s end. Absolutely finished.

There was a point on around 18 minutes where I let out what I would describe as a primal scream.

The question is this — are Liverpool punching themselves in the face? Let’s be clear on one thing: Brighton played well. They looked so smart, their decision making was excellent and they had a lovely shape. I like them, I like about six of them a great deal. I would go to the end of the earth to watch Alexis McAllister play football — rail strike be damned.

But the job is Liverpool. The problem is there are two Liverpools on the pitch today: Dreadful Liverpool and Good Liverpool. We see them switch between the two like a light bulb. It’s on. It’s off.

The first 20 minutes are dreadful. Let’s have it out. These days defenders attack and attackers track back to defend. It’s what makes modern football so fluid, so beautiful. It’s how we know it isn’t the 1970s. Everyone attack, everyone defend. Or in the case of this game: no one attack, no one defend. Trent Alexander-Arnold looks ropey out of possession but to give him his due he gets absolutely no support. From anyone.

All the way through that first 20 minutes there is a problem — Liverpool make mistakes and then never dig each other out. This has been a recurring issue through this season — a lot of footballers looking at a mistake with almost academic interest. “That can’t be right,” they think to themselves. “Someone should do something about it.”

Brighton’s first goal on the fourth minute is top of the list of things Liverpool do not need. Trossard has a great game but Liverpool hand him the ball and ask him to put us behind in the opening five. The second comes soon after in a similar fashion. Utterly despondent. Virgil van Dijk looks unsure of who is supposed to be where.

We lose possession more often than we gain it. This is at the heart of Dreadful Liverpool: we cannot hold on to the ball anymore. We don’t look as fit or as fierce as Brighton and we lose the ball. As a result  no passes forward go anywhere and no attackers look threatening. Fabio Carvalho who should be embracing Jurgen Klopp’s faith in him just looks inexperienced.

It looks so easy for Brighton to play out. The holes are enormous and Pascal Gross stands still and finds himself in a vacuum.

At 2-0 down the switch flicks from Dreadful to Good. Bobby Firmino remembers who the hell he is. We pull one back and all of a sudden this is a different team. Thiago, who has his worst showing in that first 20 since grounds were empty, comes to the fore and we look fighty and angry and just a bit determined. Alisson Becker has organised the back line and our high defensive core starts to look more solid. Where Liverpool had made Brighton look good, it becomes apparent that we have the better players. They fall back and we get to half time with no more damage.

We all wonder what Jurgen Klopp is going to do to make a change. Good Liverpool is working hard, and some more fresh legs off the bench could make all the difference in this game.

Every sub should make us better. But this proves only to be true for the first. The rest are a question mark. However, Liverpool play well for the first 15 minutes of the second half. Suddenly there is a lot of Jordan Henderson and Mo Salah. Joel Matip still needs to firefight a great deal but Liverpool are the better side. Actually the better side.

In 2022-23 Liverpool, sanity never ever prevails. My sanity doesn’t prevail. I am on my fucking knees here begging you, Liverpool, I need sanity to start prevailing soon. I need you to stop looking a sanity gifthorse in the mouth when it comes.

The sanest game this season has been Napoli 4 Liverpool 1. When we were abject and got what we deserve. Winners beyond 85 aren’t normal. The 9-0s aren’t normal. Games are out of hand.

Liverpool aren’t normal. Some abnormality is fine. But this is killing me. Just killing me.

“I thought we were going to get away with one. If you take that game as a whole, a draw is absolutely a fair result if not, a Brighton win.”