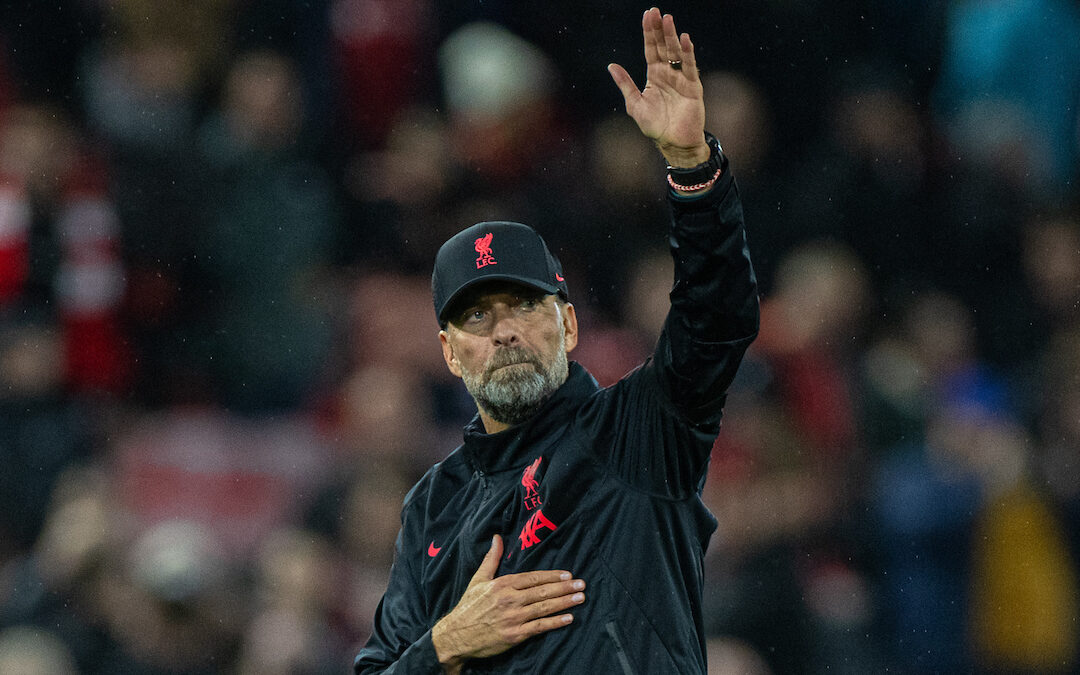 SORRY this is a bit late.

The team drops and suddenly the idea of a run of the mill 2-0 seems unlikely, but yet again this season Liverpool confound expectations. This time pleasingly.

It’s a 4-2-4. There should be no messing about or equivocation about that. It is a line of four, a line of two and then a line of four. It pretty much remains that way until Harvey Elliott comes on and then it may be a little closer to 4-2-3-1 due to him and Roberto Firmino.

But Liverpool start off with four forwards and all acquit themselves well. They make the system work. They are all quite different as footballers and, right now, have different gazes upon them.

Darwin Nunez, the big fella, is a whirling dervish, pulling this way and that, coming short, running channels. He’s all action and some wasted movement, but the closer he gets to the penalty area the less is wasted. He comes alive around the box, grows bigger and more certain and can’t take his shots early enough.

What helps him is Mo Salah clearly loves him. It’s worth remembering that Salah seemed to love Divock Origi in patches and part of why he has ended up here was his relationship with Edin Dzeko. There is something about Darwin which seems to make sense to Salah.

Salah himself, in the round, plays well. He torments his full back, who is never going to get enough help, and comes alive in all phases of play. You could watch him forever. Well, I could.

Luis Diaz and Diogo Jota weren’t quite as compelling while still offering a great deal. Jota is quite an enigmatic footballer. He will spend his career being very effective but is so unshowy you can forget about him. If Liverpool persist with this approach the thought occurs that he could be the biggest beneficary — with Salah, Diaz and Nunez taking up space, grabbing the eye then he could well be forgotten about by the opposition too.

The best player on the pitch on the night is in the two-man engine room. Jordan Henderson, both with and without the ball, sets the tempo for Liverpool. He drops the ball repeatedly into areas Glasgow Rangers simply do not want, not least because they have four people attacking it to worry about.

Thiago Alcantara has another mildly bemusing performance; he gets to look like a human from time to time and remains about as thrilling a pure centre midfielder you have ever seen. Simultaneously he is never more than seven seconds away from an apology.

Glasgow Rangers offered very little threat but it looked like Liverpool had chosen to use Trent Alexander-Arnold a little deeper in possession, with Kostas Tsimikas given licence to go; in possession it looked like a 3-2-5, Henderson and Thiago keeping it ticking and having Arnold and Van Dijk in the wider centre-back positions with Matip central.

The question that will be on everyone’s lips will be if this is a new way home for Liverpool. I suspect this is nothing new in terms of the manager’s thoughts. In October 2020, Liverpool go to the Etihad playing all of Salah, Firmino, Jota and then Sadio Mane. Further, I suspect the plan for this season has been to start four forwards in certain games against weaker opposition; the bottom 10 at home, perhaps the bottom six away, the fourth seed in the Champions League group games.

It’s important if this persists that it doesn’t become a 4-2-3-1 or, worse again, a 4-1-4-1 — Liverpool are at their best when they have genuine clarity and this collection of forwards offers that. They are unequivocally forwards and ensuring Mo Salah always has the ability to be very, very close to the goal will always be important for this Liverpool team. Clarity is what has been lacking and this game against Glasgow Rangers was the clearest Liverpool have looked, Bournemouth aside.

But it may not necessarily be the best. Against a good side, and Glasgow Rangers are not that (however vociferous Ibrox may be next week), Liverpool would have to be prepared to endure long periods out of possession and then show a ruthless streak in attack. Enduring and ruthlessness hasn’t looked to be in their back pocket so far this season but then robustness, the sort of robustness your correspondent will always crave, in midfield hasn’t worked either.

Still for last night, especially given the Ajax/Napoli result, the way to ensure we have Champions League football to look forward to next February looks clear. And these questions, they can be answered insofar as they ever are by next February.

It’s a small step. It was all we asked for. Well in, Liverpool. Keep it going.

“Liverpool did what needed to be done. There were some good performances as well. Made up Trent got his goal and Nuñez put himself about. Díaz looked sharp.”