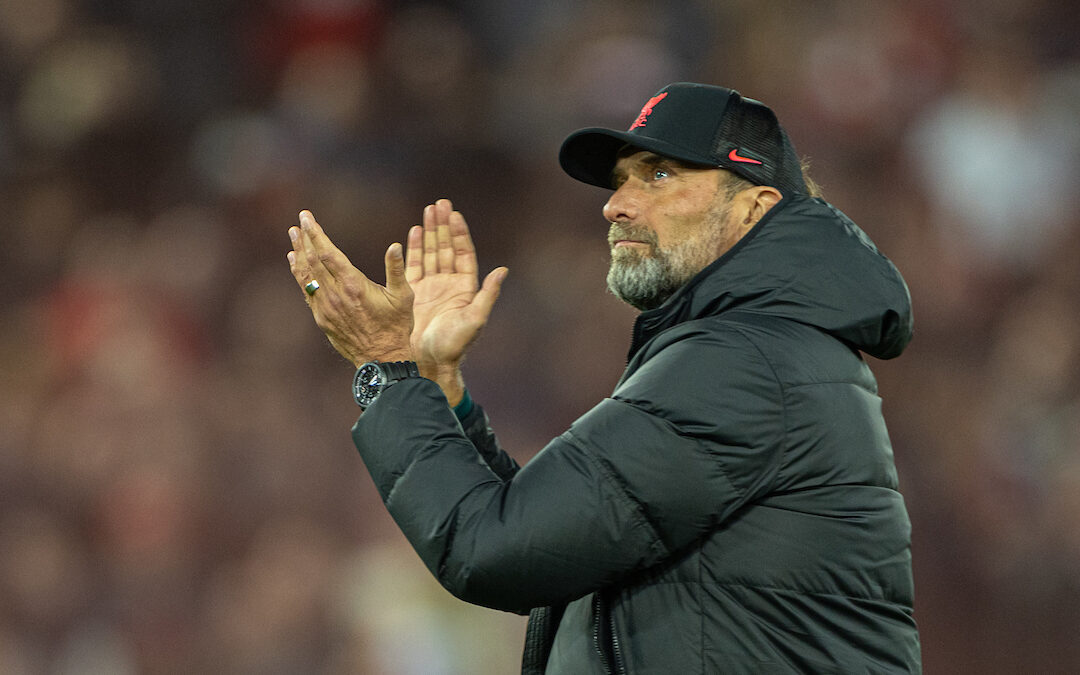 NO gifts, Liverpool. No gifts.

I couldn’t keep my eyes off the clock. It’s the most that’s been the case since Madrid in the Champions League final against Tottenham. But that was one up.

This was a proper football match. When I wasn’t looking at the clock, I was swooning. It was the best of the sport. It was elite. I loved it and adored it. I have no idea what the league table says, but two of the best teams in the whole world played against each other today and they showed why that was the case.

I watch them and am knocked over by them. They find space. They make you find a way where your best case scenario is Kevin De Bruyne has the ball at his feet. They constantly get Ilkay Gundogan in space. He gets himself in space. They have Erling Haaland and he is terrifying.

I love their manager. I know a lot of you don’t. I love him because he is my kind of weirdo. He’s smart and made out of passion.

But so is our guy. And we are the two best teams in the world. I love them because they frame us. They frame our majesty. And while our majesty may currently be laid low? Absolutely. But today they intensified that even more.

These are the two best teams in the world. The main fella was on the pitch today. His name was Mo Salah. The goal was tremendous. Alisson Becker’s ball was the absolute business and the previous saved effort was forgotten after Joao Cancelo was spinned and there was only the main fella.

He was exceptional and he ran the channels, and he showed, and he scored, and he gave it the big one, and he ran the attacking press, and he found every touch, and he is my favourite, and I love him, and he could prove to the best player ever to play for Liverpool, and the greater the challenge the better he gets, and I just want to watch him forever.

The main fella. My guy. Our guy.

At the other end of the pitch and at our perception, James Milner was like Willy Wonka when he staggers out, on the verge of collapse, with a walking stick and then does a forward roll. It’s mindboggling really. He’s as smart as it gets. Phil Foden is in every way, with the glaring exception of his haircut, the absolute business. But then there is James Milner.

Joe Gomez will do for me. I love him, you know. He is so full of quality and doesn’t have to play Erling Haaland every week. His passing is piercing. There is a weird issue. Two years ago he seemed physically dominant. That is harder now because the forwards have got bigger. But he is still my guy and showed what I wanted in that regard tonight.

Fabinho was good in midweek and brilliant for periods tonight. He finds a way over and over to get his foot in. I would like to have a big chat about space at some point. Manchester City are so good at it so imagine how good you have to be to deny them of it. He managed that over and over. More on that to come.

Andy Robertson was back and he is also my guy. Our guy. He was left with a series of big decisions between Joao Cancelo and Big Kev and Manuel Akanji, and I think Diogo Jota is in the same boat. They sorted those out. But these are the questions City ask.

Harvey Elliott had a lot to do. But he did it well. It’s playing more than one position. But then so did all of them. All 20 outfield positions. They all had to be multifunctional. What I love about these sides is that every blade of grass is involved. Everyone has to be three players.

I love this game and I love you, and I love the fact that today’s game is settled by the goal it is, and you just win your battles, and show clinical finishing, and you never ever know.

Get what you can, Liverpool.

Get what you can, Libpool.

Get what you can.

That will do for me. To play at this level, though and get what you can. My god.

No gifts.
Eyes on the clock.
Get what you can.
I’m in love. Again.
The main fella. My guy. Our guy.
A joy to be alive.
Well isn’t it a lovely day.
I’m feeling all brand new.

“That was absolutely phenomenal! Everyone’s been on a bit of a downer but we just absolutely rose to the occasion. The crowd were fantastic, the players were up for it”