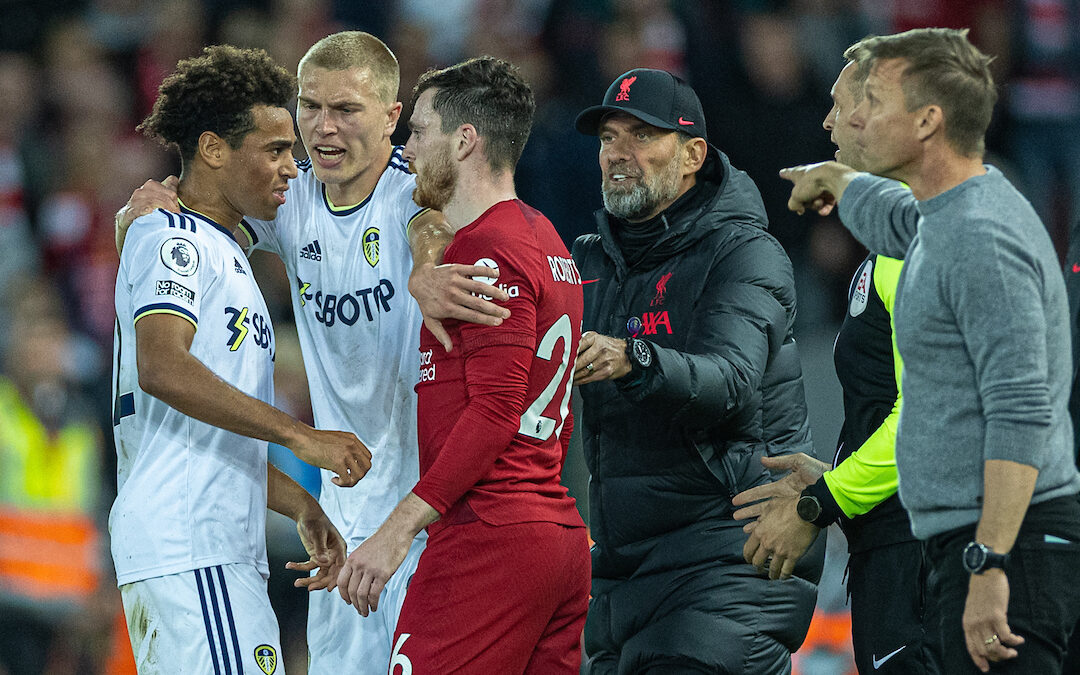 I mean. I’d like to say a good solid, honest to the skies “Fuck off Liverpool”. I’ve said that before and will say it again. Years of experience behind me, decades of decline to come.

But I’ve walked into town post match and I mostly just want to give them a hug.

Hugs are not normally part of the arrangement especially after home defeats but I walked into the Glenbuck, into The Stanley, and then I’ve walked into town and walked into The Croc and hugs are what everyone is doing. So why can’t they have one too?

I mean they are fucking idiots. They are offering gifts out like no one’s business. Both goals are frankly dreadful; one of them where there is enough blame for four goals to go around. Is it Joe Gomez’s fault or Alisson Becker’s fault? I mean wow. Share it. The winner? Look around. It stems from one end to the other. And it is worse the closer it gets to our goal.

And so fuck off Liverpool. Fuck off Libpool.

And get hugged Liverpool. You daft exhausted bastards.

So the shape is dreadful. It, frankly, makes me sick. It is inexcusable. Andy Robertson goes past three second half and doesn’t have a ball. No one at left mid, left wing or left forward. Practically no one at left centre mid. Thiago Alcantara isn’t doing shuttles for you as Jordan Henderson had to do midweek.

There is nothing down the left, not enough between the lines. Roberto Firmino struggles and shouldn’t get the 90.

Liverpool are at their best in the game in the period between the first two goals. Which makes how poor they are between the equaliser and half time even more bemusing. They dominate Leeds United before the Mo Salah goal goes in. And then, weirdly, oddly they shrink. They should double, triple down but they can’t. Instead they crumble backwards, are left hitting on the counter. Credit to Leeds in a sense but my god Liverpool. My god Libpool.

I’m furious with them. I would get them all round to mine for a big breakfast. Mona may not approve.

Stop encouraging them Liverpool. Stop showing them their way home. Stop offering belief. Start stamping on hope rather than fostering it. This just isn’t the thing. It has to cease soon.

Darwin Nunez should win the game for Liverpool. That’s the job he has and the one he craves. Not seeing it through hurts. Roberto Firmino is kept on for the same reason and he should score too. Nothing happens as it should. Liverpool should dig it out. But it becomes a 2-1 game and that’s the issue. That’s the shortcoming. It becomes a coin toss.

And that is bad news.

Every time the ball goes dead Liverpool’s players are having a big chat. An argument. A bollocking. Every single time.

This would suggest they aren’t properly set up. That the manager and his staff need to be better. Absolutely. Absofuckinglutely. But they can both go fuck themselves and have a hug too. They are our people. Good people. Listen, there’s a breakfast.

Listen, there’s a city. I’m in town and everyone is having a ball and they don’t get that, not one of them. And maybe you don’t either, where ever you are, whatever you are up to. Maybe you think we can go fuck ourselves. Absolutely. Absofuckinglutely. Fill your boots.

Come to ours for breakfast Libpool. Fuck off Liverpool. Come dancing Liverpool. Do whatever it takes Libpool.

No more gifts, I’m begging you Liverpool. That’s my line. But come in here.

I love you, for my sins and for yours.

“You’re playing football at the highest level and you can’t give gifts away. The biggest problem with this team at the minute is that it just keeps on giving gifts away.”