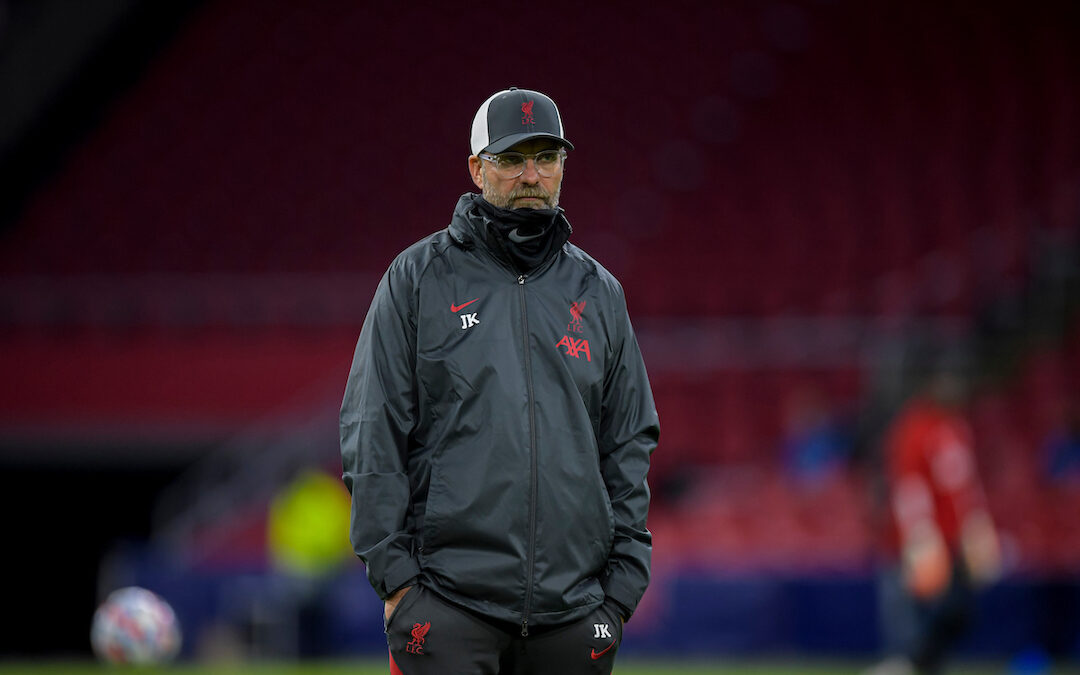 Even if the Manchester City game could be ruled a one off, getting three points against West Ham felt like the start of a run.

There was an opportunity to build consistency and get the first away win of the season against a Nottingham Forest side struggling for form. A win against the team bottom of the table felt like a given – until it wasn’t.

The manager referenced various factors following the game that had an impact. The late call up of Curtis Jones, the injuries that continue to plague the team, and the defensive set up of Forest who played consistently with nine men behind the ball. Yet still, there should have been enough.

On the Second Look show yesterday, we spoke about taking risks. Perhaps with confidence still lacking and younger players involved, there was a reluctance to take risks at the weekend. Rather than driving forward and risking losing the ball, players passed backwards and the game slowly stagnated.

This team, though, thrives on risk versus reward. Whether it’s the high line, playing out from the back or committing players forward to the press, it is a balance that nine times out of 10 has been well struck in recent seasons.

It is certainly a balance that will need to be carefully addressed against Ajax. Coming away with one point would take us through the Champions League group and offer a chance of rotation against Napoli at Anfield, but playing for a draw is a dangerous game.

The fixture at Anfield was a warning sign of how Ajax can get back in the game in moments. Six minutes after Mo Salah opened the scoring, they equalised against the run of play.

“And then you concede, you are 1-0 up and you concede with the first chance of the opponent. It’s typical, a proper setback. The reaction was OK, not perfect but OK,” said Jurgen Klopp in his post-match comments.

A lot of things this season feel against the run of play, but the reaction needs to be more than OK. It’s palpable that players feel hard done by, looking around to try and deduce why the game has gone the way it has.

Liverpool have to make sure that nothing surprises them on Wednesday. Just see the game out. Defensive mistakes crept in again on Saturday, but with a lack of availability owing to injuries, there is little room for rotation.

Trent Alexander-Arnold should come back in at right back, and from there I expect an unchanged defence of Virgil Van Dijk, Joe Gomez and Andy Robertson ahead of Alisson Becker.

The midfield was the problem area against Forest. While a new formation is being trialled, any change in personnel can throw things off. Momentum was gathering, but Jones returning to a role he is unfamiliar with and Fabinho not putting in his best performance, there was a total lack of control.

How do we find a spark in midfield without Thiago Alcantara? We can dream of a new signing but, until January at least, Klopp will have to look internally. As the other progressive passer in the midfield, Jordan Henderson should return to the starting lineup on Wednesday.

The Forest game came a day too early for Darwin Nunez and we clearly lacked a focal point in attack, struggling to get in behind and into threatening positions. I expect him to play on the left against Ajax, with Roberto Firmino and Mo Salah in the middle and Harvey Elliott occupying the right hand side of attack.

We have to accept this season we are a team in transition, but that doesn’t mean we can’t enjoy the ride. Some days will feel low, but let’s hope they’ll make the highs feel even sweeter.

“Maybe now there’ll be chunks of the season where they’re able to find energy and spirit, and there’ll be others when it feels a bit too hard… similar to being a supporter at the minute…”