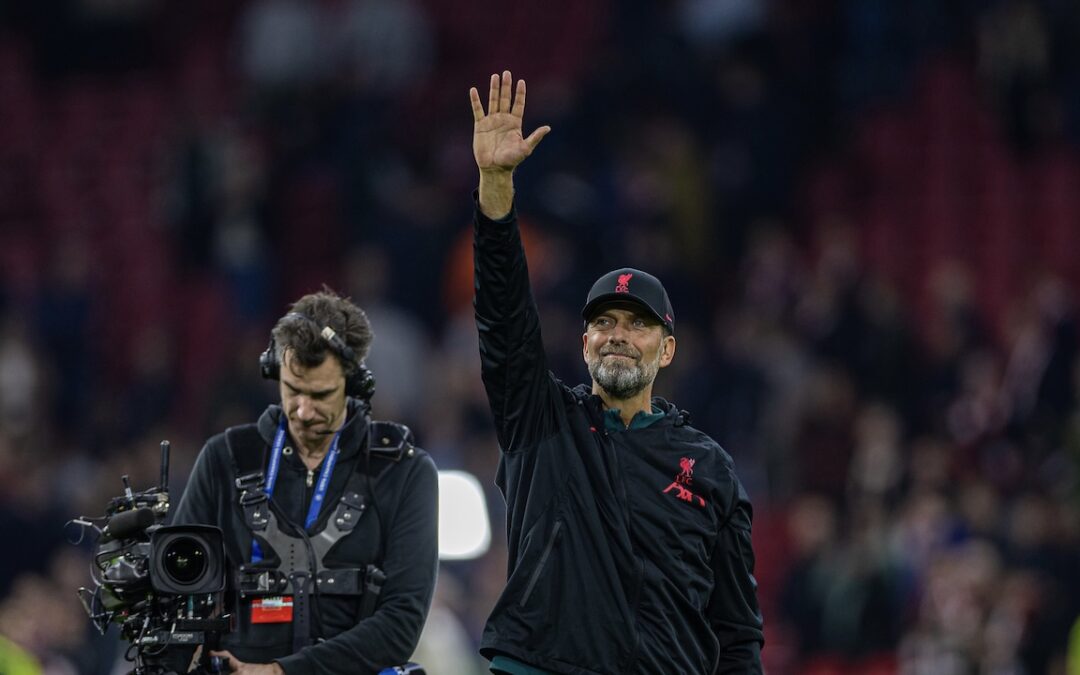 LIVERPOOL are in the last 16 of the Champions League and the record books will show that and only that.

In this instance, this is no bad thing. Not because we need to obscure, but because over the course of the 90 minutes it is what Liverpool deserve.

Recently, though, we have learnt painfully that moments skew the path of football matches and tonight is a story of the pathways not taken. A reminder too that recently for Liverpool, so many pathways in games taken have hurt them when a bounce of the ball wouldn’t have been too much to ask.

Or a goal saving block. What Trent Alexander-Arnold does, just when Liverpool had begun to control the game, is the purest form of the natural defending we so often hear is outside of his sphere. He senses danger. He panics. He gets in. He finds the place of maximum effectiveness. He is brave. He gets his reward.

The reason why that passage was that important is because it comes after Liverpool asserted themselves. Ajax Amsterdam start quickly and find ways to rock Liverpool. They should. They are Dutch Champions and Dutch Champions Elect. That it is too easy can be a concern.

That Liverpool appear to pick a strange diamond which exposes space can be another one. We’ll come back. But Ajax are the better side for 20, which is their god given right on their pitch.

Liverpool, though, find their way after that 20, which is why what Trent Alexander-Arnold does matters so much. So often this season, especially on the road, Liverpool have conceded at the worst possible intervals. Not today.

The game settles in Liverpool’s general direction, but that ebb is underlined by the opener. It is solid competitive play from Liverpool, suddenly crowned by excellence from both Jordan Henderson and Mo Salah. It is irresistible football and it all but ends the affair. Some goals seem to count double for a variety or mishmash of reasons. That Ajax hadn’t profited from Liverpool sloppiness. That the group was now skewed. That the goal was gorgeous. All of this made it feel immense.

It was backed up by Darwin Nunez hitting the post, which was at the forefront of British minds as something negative for Liverpool, but which will have hit Dutch minds as symbolic of their flimsiness; we often forget the push and pull. And we forget what Darwin is – the centre of the cyclone. Cyclones don’t stop quickly.

Darwin makes it two second half with an excellent header that suddenly seemed to have been coming before Salah found Elliott with a pass of such deep, mysterious and profound beauty I want to take it dancing to ESG, then read it Shakespeare’s Dark Lady sonnets on the road to Nabzy’s.

It was all over bar the shouting. Being lucky in moments, being good in moments, both for and against and simply being better made hay for Liverpool. Who knew? Who would have guessed? But all of this is in the framework of the space and the chances conceded. It is legitimate to come out of this concerned for Liverpool and simultaneously saying this: “No one wants us in that draw”.

No one wants us in that draw. Absolutely no one. What, win your group and get a trip to Anfield? Are you messing? Especially when February could be like shaking the snowglobe up.

We have to hope we hit that emotion. We are not ourselves. We still need the snowglobe to be shaken. We are still more than capable of winning this trophy. All these things back to back get to be true. But what is truest is that this season carries that most wondrous of qualities into February — hope.

The record books showed that Liverpool had reason to hope going into February of 2023. The rest is, as yet, unwritten but what has been written, been seen, been feasted on in the past is that Liverpudlian hope is tangible, is global.

It can count double, can make us forget ourselves, can get us somewhere else, somewhere good.