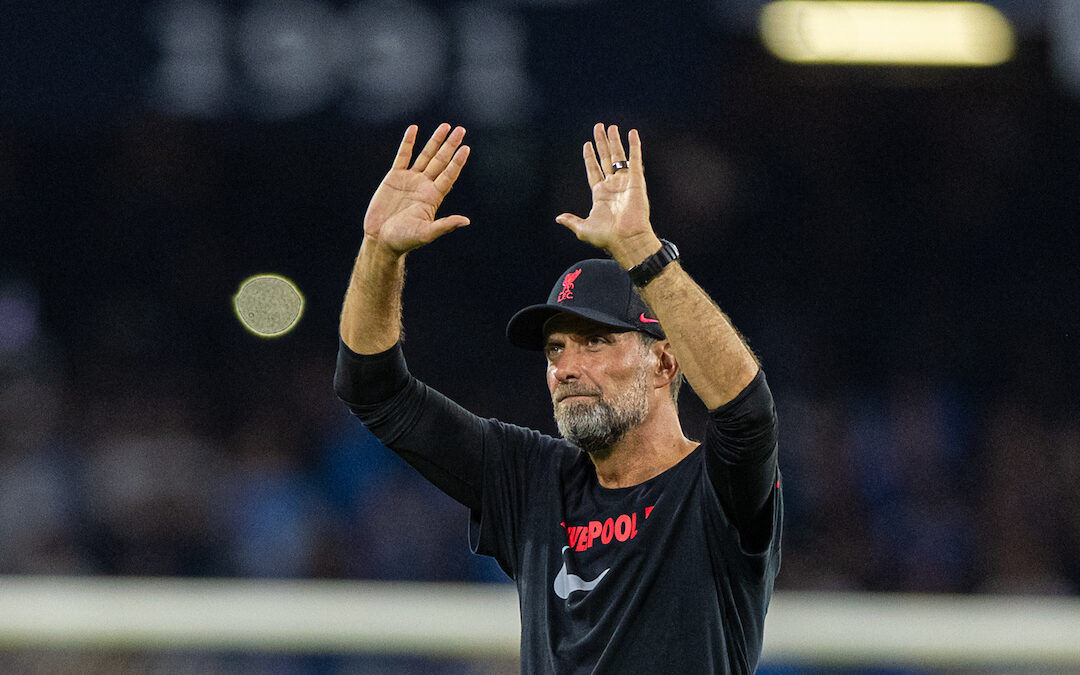 I am quite the blasphemer. A constant call to the saviour that shall always be in vain. It’s just there in my lexicon, it’s my go to.

I worry about it at times, though. My general position isn’t that I drag our lord’s name through the mud, nor do I do that for any of the top fella’s mates. It’s the casual use, the JFC use, the use of a man going fidgety and a bit mad. It’s an agnostic use from an agnostic man.

I mention all this because all I was left with today was an invocation of our lord. I have a creed, catechism and a hosanna in my pocket in general, but today all there was was his name in vain and I feel like this isn’t sustainable.

Jesus Christ, the shape is appalling. There is always the call and the desire to talk about running before we talk about shape and wants and needs but today the shape is in ribbons. The shape is brittle and the shape is not the answer to anyone’s prayers and Liverpool are left needing to pray.

The shape is wrong, the building is ablaze, the urgency is lacking. Liverpool are asleep and things can’t get much worse.

Chances are missed. Chances to create chances are spurned. Calm is present in the wrong areas of the pitch. Liverpool defend like they are in complete control. Liverpool attack like the building is on fire. This is broadly the wrong way round.

Liverpool feel like a computer game side where too many of the sliders are in the wrong position. Liverpool look like an art project in a number of ways, Liverpool are trying something new.

The manager was at pains to argue the opposite this last week. I’ve some sympathy with that. At different times last season Liverpool played 4-2-4, to all intents and purposes, but could flex back if the situation called for it. And it appears to be the flex back which is the current problem.

Liverpool’s first half was dreadful. Among the very worst you could ever have seen or conceived of. Not one slice of it works. The best bits look after the ball. The worst bits have the building on fire.

Second half the best bits come as Napoli knock off, grow complacent. Complacency is strange. Is that us? I think the issue is that we are dealing with 11 or 16 disparate individuals. I don’t buy the idea of the group here. Whose head is where we need the manager to get to the bottom of.

I’m quite the blasphemer. But there are names I honestly won’t call out, because this thing has been an act of love and an act of care and we’ve seen and lived that and reaped the benefit.

I’m quite the lover. I’m fuelled — on my good days — by kindness and care. I haven’t named one of them nor have I named the manager and right now I won’t. They’ve all earned, every last one of them, the chance to put this right.

That’s the thing, they have left themselves with only one chance to give themselves a fighting chance. It is September 7th and they need to win the next three. I’ve watched the footballers I’ve loved have these moments and most find their way, most get a solution, at least for a little while.

But use of our lord’s name is in vain. And these lads, so many of them, could find their names in vain too. So many of them, our loves, our heroes. Our leaders.

Lead, will you. This isn’t it. Don’t let it happen again.

We need them to sort this.

“I feel like this result has been coming. I don’t think anyone is shocked and that’s what’s annoying.”

“It’s the performance, the lack of energy. Who’s in form bar Diaz?”