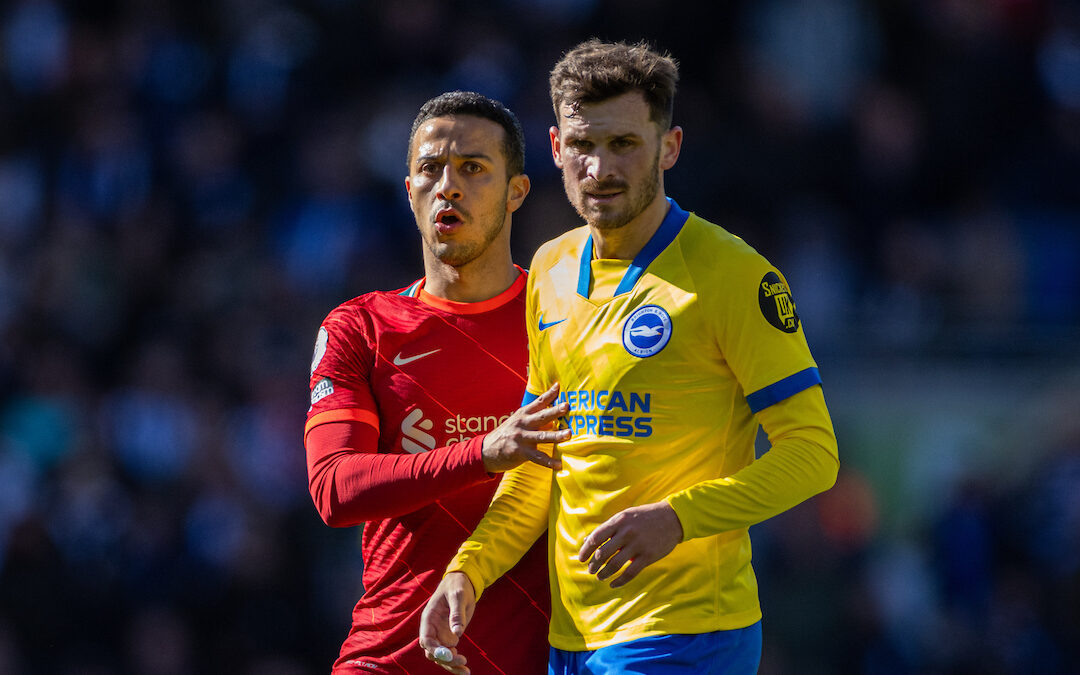 THE wait is nearly over.

For the first time in nearly three weeks, Liverpool are back in action.

Normally, we bemoan these long breaks. Jurgen Klopp is known for his regular outbursts on player welfare and needing more time on the training pitch. But after prolonged spells away, his sides look sluggish, even if it benefits them long term.

This time, however, I am grateful for the rest. The manager’s pronouncement of pre-season extending into the season has looked very accurate. Tons of injuries, fatigue and new tactics have plagued The Reds thus far.

It’s something Klopp himself recognises. When asked before the Ajax game if the Wolves postponement had disrupted Liverpool’s rhythm, he replied: “What rhythm?”

The players needed time away and the coaching staff needed to regroup at Kirkby. A final calm before the foreboding storm that is nine games in 29 days.

Of course, that hasn’t stopped us supporters from kicking our heels and pondering the unknown. Is this season soon to be a write off, with the performances an ugly sign of things to come? Or is it merely teething problems, exacerbated by injuries and a hangover from last season, that will soon correct itself?

The good news is that this question will soon become clearer, starting against Brighton. 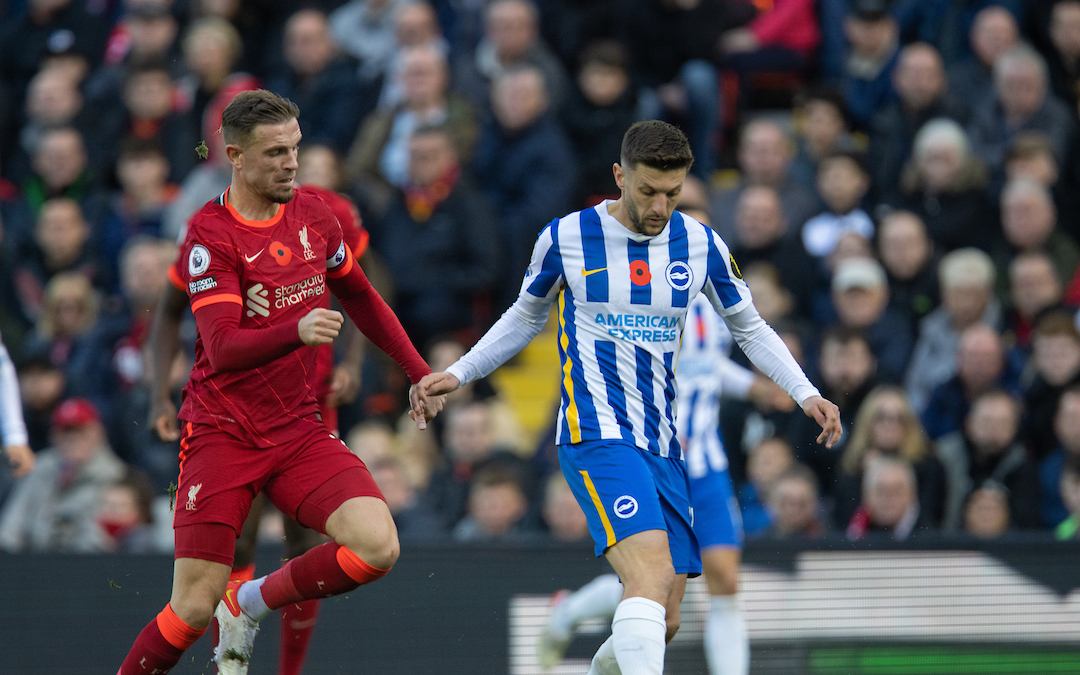 Brighton will be thankful for this break too. They could have been facing us with Adam Lallana taking his first steps into management.

Now, new manager Roberto de Zerbi has had a decent spell working with his new players. He’ll obviously have his own ideas, but I wouldn’t expect a radically different Brighton from the outfit that outclassed Manchester United on the opening day.

Furthermore, the Italian is apparently similar to Graham Potter in his attacking approach, unlike many of his compatriots.

As we know, their players are already more than capable of taking points off the top teams. He is not coming into a fight for survival. They’re sitting comfortably in fourth place, with the fewest goals against in the league.

The Reds’ last game against Ajax feels like a lifetime ago, but it was our strongest performance of the season bar the 9-0. Liverpool controlled the game, cut out counter attacks and the forward movement looked fluid.

Thiago Alcantara was a critical component in that. His cutthroat passing and superb counter pressing gave us a foothold throughout. Him starting is a must. Fabinho should slot in alongside him.

Arthur Melo’s situation is intriguing. He’s certainly putting in the hard yards, yet has not kicked a ball in anger since May 11. He’ll be saved for the Rangers game next week, with Harvey Elliot tasked with a starting role.

Diogo Jota brought our attackers together against the Dutch opposition and warrants a place through the middle. Too often our frontline has resembled three individuals trying their best. His work rate off the ball and strong physicality made Liverpool’s attack a collective effort. Furthermore, he can find the net out of nothing thanks to his instinctive movement in the box. 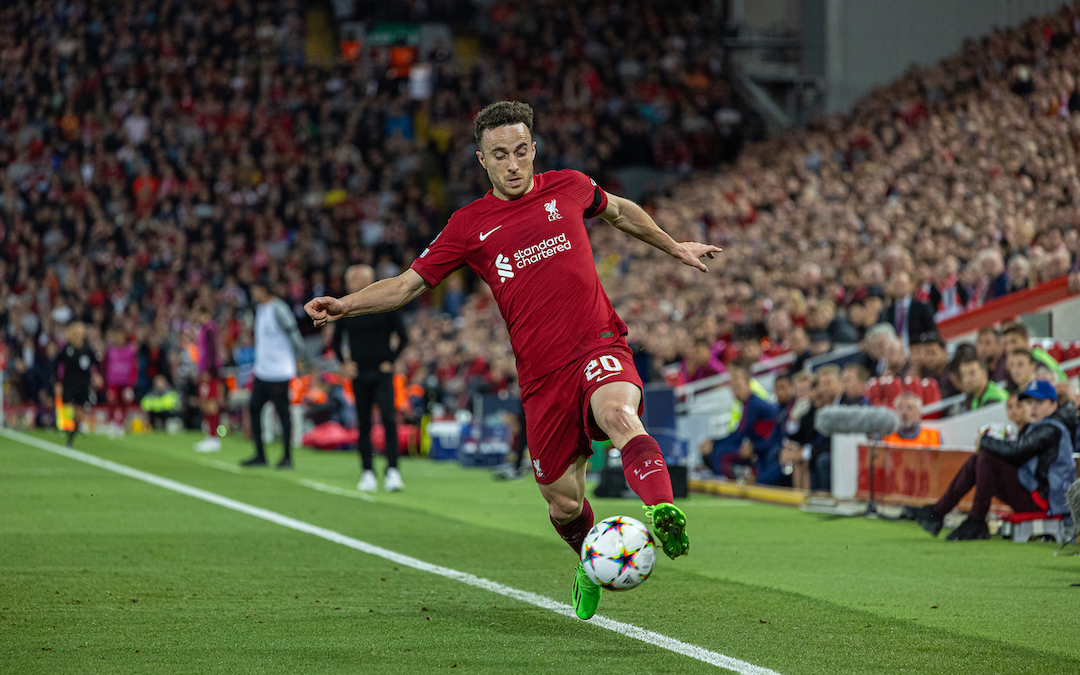 I do feel for Darwin Nunez. He’s done better than most give him credit for and needs a run of games under his belt. Nevertheless, for the time being, Jota represents the safer option.

Mohamed Salah and Luis Diaz are nailed on, while the back five from Ajax will return.

I’m casting my mind back to that grim lockdown season. Liverpool were due to face Manchester United off the back of two dreadful draws and defeat in the Champions League quarter final.

That fixture’s postponement due to fan protests gave The Reds a crucial week-long break. Five straight wins followed and a Champions League place was secured.

Perhaps we will look back on this dull interruption as exactly what the doctor ordered.

This campaign has simultaneously felt gruelling and stop-start. This fixture is an opportunity to rectify past errors and kickstart a decent charge at the league title.

No team has a 100 per cent record. Everything is still to play for.