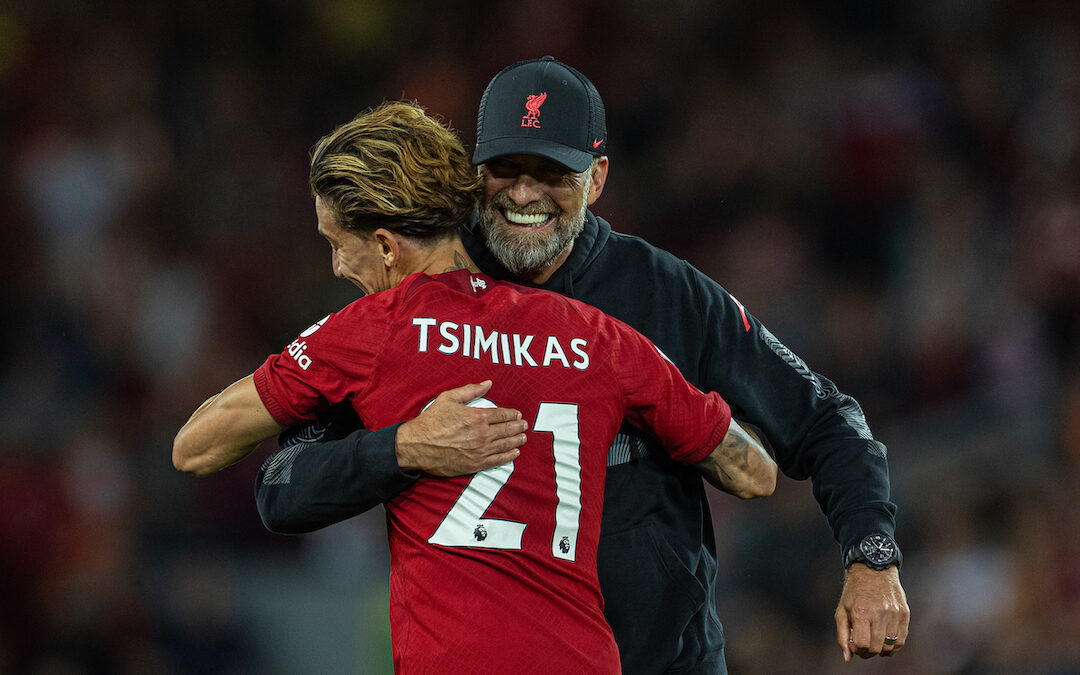 Jurgen Klopp speaking to the media yesterday echoed the shared confusion among the fanbase that the season has started the way it has.

He rarely fails to convey what many of us are thinking — it is one of the many characteristics that makes him so great.

Yes, there are things you could have pointed to before the season starts: the departure of Sadio Mane, the lack of investment in midfield, the period of transition as the team adapts to playing with a focal attacking point.

However, we all know deep down that none of these factors alone are significant enough to turn a team that reached every final last season into one that can no longer find its shape, momentum and intensity whatsoever.

Has there been a shift in mentality? A lack of showing the right attitude at times? A change in formation? Perhaps an element of all of the above. So yes, we’re left with lots of thoughts.

That likely makes it difficult to know where to start in training, but the manager opted for “four or five days of absolute truth”. Not hiding anything and forcing the players to sit down and reflect on one of the worst performances since Klopp joined the club is a bold but necessary move. 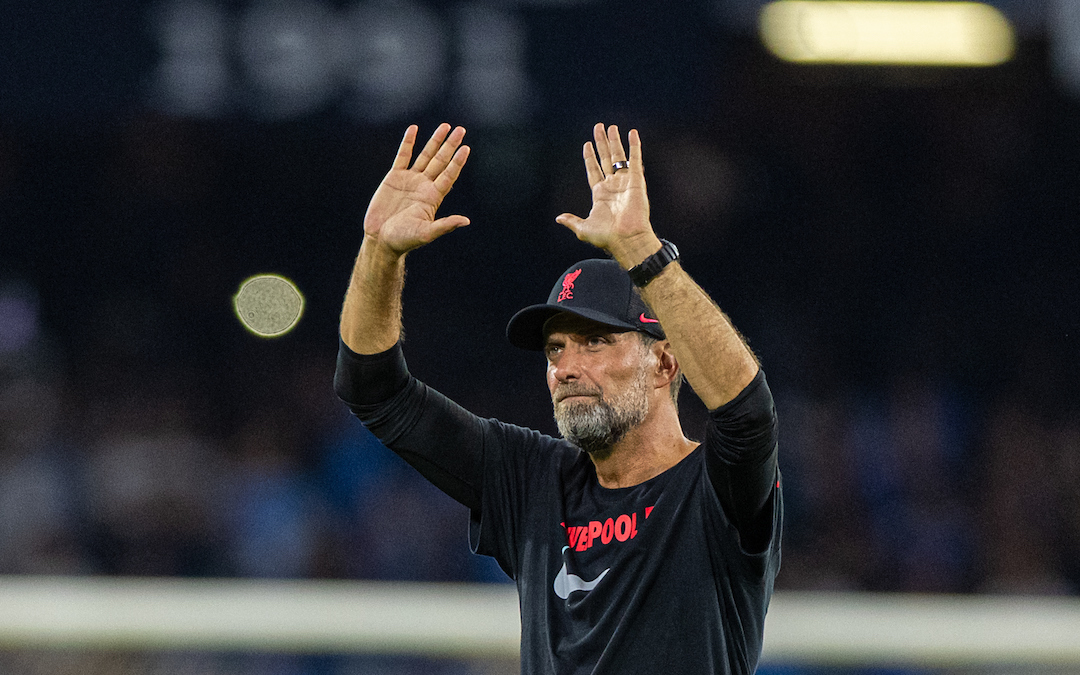 Having what I imagine would be tough conversations with individual players is a shift from the norm, but one he deemed necessary. But most importantly, ensuring that the team is on the same page when it comes to dealing with the challenges at hand will be vital. Start with small steps off the pitch, and hope they make a big difference on the pitch.

Tonight a new challenge awaits, as Liverpool come up against a team both in transition and in form. With a new manager and a big turnover in personnel during the summer, Ajax have coped well with the changes. A team that has scored 28 goals in their last seven games, the defensive problems they will cause is clear.

Klopp highlighted that getting it right in defence is the bedrock for everything, and he’ll stick with what he knows when making defensive selections.

Taking up media duties yesterday, Joel Matip will retake his place in the starting 11 tonight alongside Virgil van Dijk.

The news that Andy Robertson is out until after the international break is yet another blow, but Kostas Tsimikas has proven he is a more than capable replacement.

Questions have been asked of all of the backline, but Trent Alexander-Arnold’s form in particular has come into question recently. He’ll be keen to silence any doubters tonight. 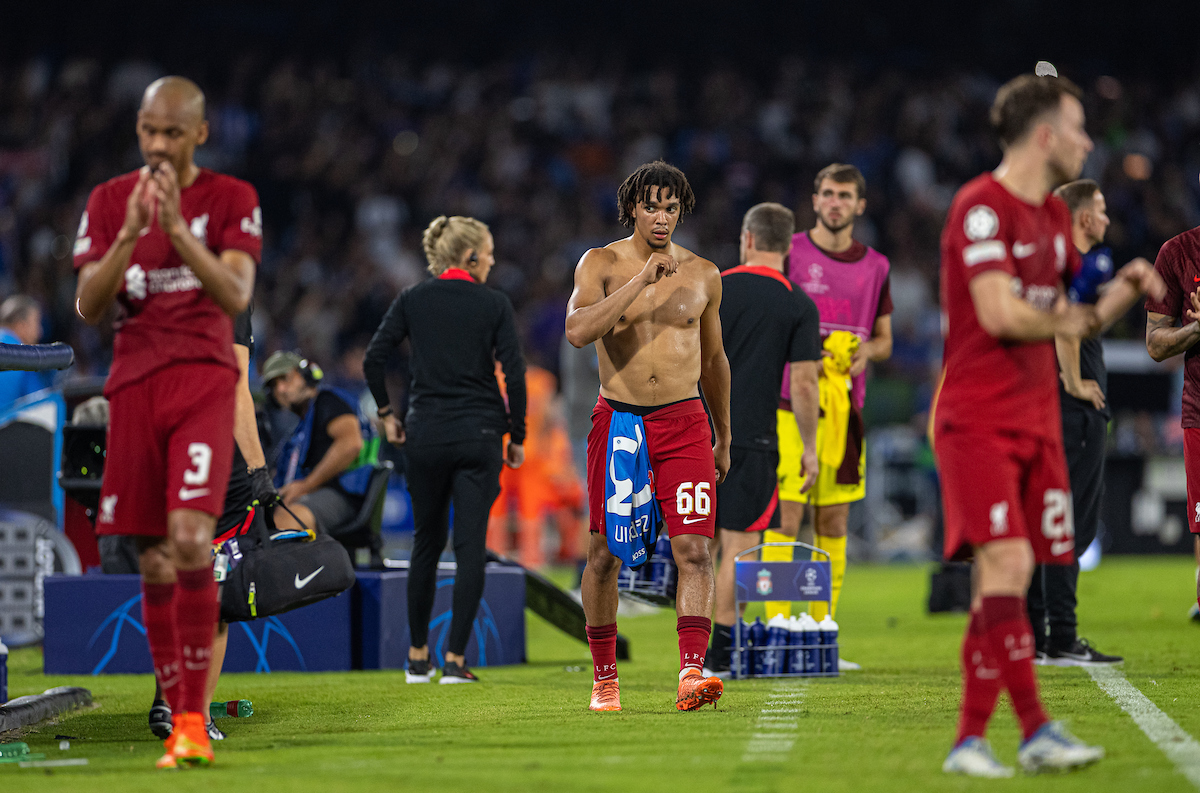 Winning more ground duels than any of the other midfielders combined when he came on against Napoli, Thiago Alcantara’s impact is no secret. While Liverpool need to find solutions when he is unavailable, his return to fitness is a huge boost and he will surely slot straight back into the team tonight. His creative abilities are clear, but it is his defensive work that could make the biggest difference.

With Thiago back and Fabinho in to provide cover, Klopp will hope that Harvey Elliott is able to play with a little more freedom and link up with Mo Salah as he completes the midfield trio.

Who plays number nine will be the big question in the forward line, with the bench looking more stocked with attacking options. Diogo Jota is back and Roberto Firmino has been consistently involved since the start of the season, but I’d be surprised if Darwin Nunez didn’t get the start tonight.

If everyone played to the same level of Luis Diaz last week, the result would have been very different. He has to start on the left tonight alongside Salah on the right.

Only the second group game of the season, but one that has become vital for Liverpool to get something out of.

And so the reinvention begins.