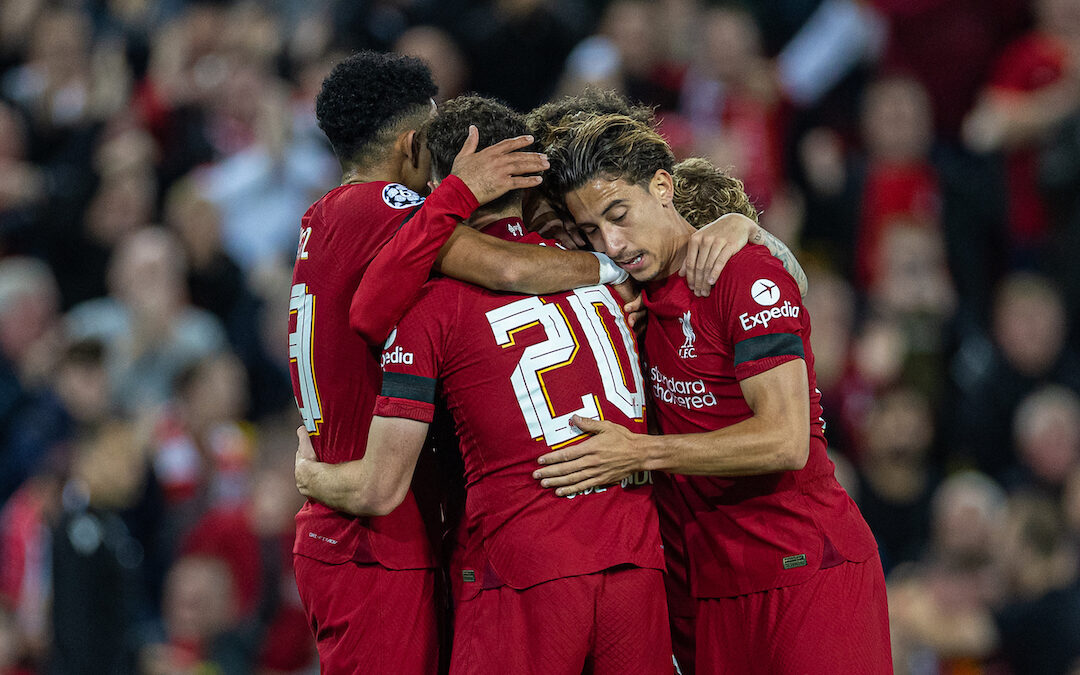 ARE you a gambler? Have you played board games?

The worst thing is the dice rolling when you know what you need. Those moments and that click/clack. The reality can be dealt with when the dice settle. But when you need to know about the dice, when they won’t settle, those moments kill.

Under this manager, since we first qualified for the Champions League in 2017, the start of every season has been endlessly constantly rolling dice and then the dice settle and we find out what the season is. In 2017-18, the 1-4 win against West Ham United makes clear we’re chasing top four and capable of scoring hatfuls everywhere.

A reason, on top of the obvious, Divock Origi’s goal against Everton means as much as it does is that the season is in the balance. By the time we go to Molineux and beat Wolves 0-2 we know what the 2018-19 season is.

Even in 2019-20, it is Leicester at home before we know what we are doing really and truly.

Covid season aside, last season doesn’t really settle until Brentford at home. Then we understand the job and we settle in.

Last season was the latest the dice continued to roll and it made it hard to enjoy until that moment and then we got to have an absolute ball.

At the minute, every game is the rolling dice before a ball is kicked.

But tonight the dice was rolling and rolling. And it continues to roll.

We could do without it rolling through games so constantly. The dice are killing us.

Being fair, Liverpool are better than the dice tonight. Liverpool deserve to win the game and to win it comfortably. At half time Liverpool should really be 3-1, allowing for Ajax’s one moment of genuine quality.

It’s important to acknowledge this for a second. Ajax score from creating down the Liverpool right, but they play brilliantly to create the chance. Liverpool have been leaking chances and have shown weakness, but correlation isn’t causation. Sometimes a side plays well and a side opens you up and even then needs a great finish. It’s a great finish.

But it is a rare moment for the first hour. Liverpool are the game’s dominant force and it is genuine hard lines. They are pressing intelligently and aren’t getting sucked into nonsense.

It is fascinating to see Diogo Jota so clearly lead that press. Liverpool go when he goes and that is the clearest that dynamic has been in a couple of senses since Adam Lallana has been in his pomp. Liverpool didn’t press relentlessly, but when they started to press they did so without relenting.

Thiago Alcantara was marvellous. He’s a delight to watch, not just because he is brilliant at football but because he is made of needle. He revels in it and wants more from us. He’s here for the dice settling and the party starting. In his own mind, he starts the party and he may well have a point.

If Liverpool can get Diogo Jota and Thiago Alcantara on the pitch more often than not, this season could make sense soon. The thing about the pair is that they have been on the outside of all of this so far this season, and the thing was they had no patience for the nonsense that so much of it has been.

Kostas Tsimikas and Dusan Tadic had one of the better battles I’ve seen in an age. It was one for the ages, a proper ding-dong affair. Tadic was muscular and Tsimikas was nifty. There were elbows and bodies. There was backing in. It was reminiscent of Big Kev Davies in his pomp and Tsimikas got the better of it. His performance was another which settles him and nobody wanted the win more than him.

The winner, when it comes, had been coming in both manner and essence. Liverpool kept banging at the door through set pieces and Ajax couldn’t cope. However, the delayed gratification of the referee’s watch was something to behold and then you got to see what it meant tonight. It meant everything.

It’s been hard being on their backs. They are the best ones. They will always be the lads who did the things we needed doing. But tonight they got to be the ones who needed what was done. They needed the bit of luck because they had earned it. Had they gone away with hard lines they may have been too hard to bear.

Both goalscorers were excellent but across the pitch there had barely been a bum note. Darwin and Firmino offered a lot when they appeared. It wasn’t back to basics as much as back to base. Our game, on our turf, with our parameters.

It’d be good to know where the dice will land sooner rather than later, but there is a clear date for that really. The World Cup looms large, but tonight’s result and performance goes a long towards suggesting that Liverpool’s interest in February will be sustained in the big one. The performance suggests they may have got out of dodge, but more on that in October.

The dice keep rolling. The palpitations remain. Liverpool are not out of any woods yet, but they may be able to see the forest for the trees.

“Given the calibre of the opposition, it’s the best result of the season… Everything was back to resembling the Liverpool that we’re used to…”