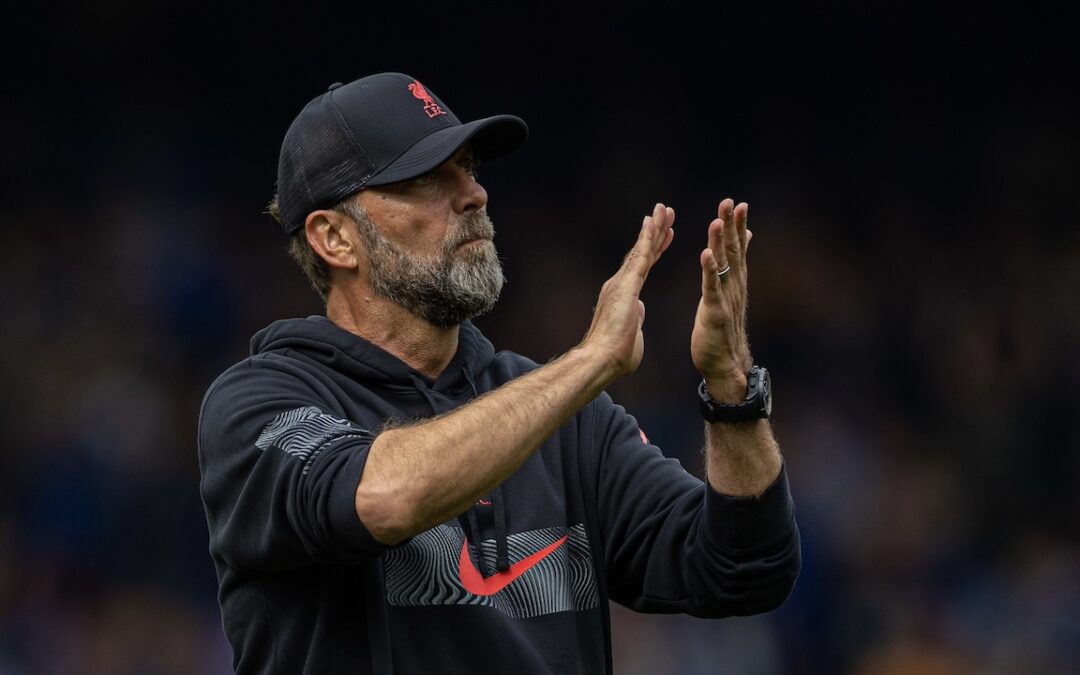 Neil Atkinson’s post-match review after Everton 0 Liverpool 0 in the Premier League at Goodison Park, and it’s two dropped but not the worst result…

(THE football) Two dropped. But not the same as the other kinds of two dropped.

(Not the football) Because of Goodison Park. Because of Everton. Because of everything Everton is and represents. Because it is meant to be hard and then when it is, it is sort of gratifying.

Listen: before the game, on Thursday, we did a build up show and we talked about The Blues and my god did we know a lot about them. We talked about the game and then and again today walking in with Steve I compared it to going to Alton Towers and getting on Oblivion. You should be fine in the end but you’ll look down the abyss. You’ll feel that rollercoaster tension and you should feel it because it is Everton.

I wished, after Thursday and today, I wished The Blues could hear and the reason why is because they should know why it matters. Everton away is the first game we look when the fixtures come out. This is still not the football because it pertains to the feeling that leads to some of the graffiti that has hit Anfield. The thing I want all the Blues to know, absolutely all of them, is how much this matters to Liverpool supporters. It matters as much as it ever did. You don’t need to get our attention. You have it. You absolutely do. Everton is the first result I look for.

None of this is to condone or even attempt to understand racism or despicable abuse. What’s happened today around Anfield is genuinely dreadful. But it is also just totally unnecessary.

Every football club, every group of humans has five per cent of idiots. Everton have them. Liverpool do too. My point, as someone who wants Everton to never win as much as a tombola, indeed because I am that person, is that we’re in a rivalry with one another and that isn’t the same as dehumanising one another. Hate us for 90 a season, hate them for 90 a season. Want us to win nothing, want them to go down. Whatever, whichever. That’s fine because hate can be on a spectrum with love and can be a reminder that our friends, our family, our lovers and our workmates can support the other.

Hate for 90. But don’t try and drag the humanity down. Don’t dehumanise. Don’t do that. That’s what happened in Anfield. That’s what the abuse did. But ultimately it dehumanised those who did it and risked doing that to their fellow Evertonians. They made themselves lesser and made other Blues feel lesser as well and that needs to be acknowledged by Blues themselves and they need to get to grips with it and work out how to stop it. Especially, obviously, the racism. They need to graft.

This, all of it, in the round, I want none of that and The Blues I know won’t either. They rightly won’t want to be associated with that sort of carry on so we end that there and remember that as part of where it hits the football.

(The football) Liverpool started the game with an idea that they’d move the ball quickly around Everton. Liverpool’s first five is marvellous but then they get stuck in the morass of the football match.

What Everton do especially well first half is work out their outball in different situations. They know the right angle and the right move to get the game to take place around the halfway line. Watching The Blues in person (because I have watched them a lot on telly — see above) they are quite good for 50 yards. The issue they have is that it is the first 50.

The first half is odd — having seen a lot of 0-0s at half time, I’d think one where the ball had hit the crossbar three times would be a good one. But it very much wasn’t. It was a thoroughly mediocre affair.

The manager has had his fair share of 0-0s at Goodison Park and at half time makes his first move to ensure he doesn’t have another. He goes 4-2-4 in the most bang on way. It’s not a chat about 4-2-4. It’s 4-2-4 and let me tell you Harvey Elliott is one of the two.

It’s mad. It’s a million miles away from what has brought us to the party. And it further weakens the right hand side. Liverpool have gone out of their way this season to change what is happening on the right and so far that is a net negative. Liverpool’s right is just less good.

But it is a statement of intent. And the intent is there. Liverpool elicit a series of marvellous saves from Jordan Pickford to go with his first-half belter from Darwin Nunez but the problem is that Liverpool are so porous on the counter, especially from Liverpool’s own corners. The structure on the edge of the Everton area repeatedly drives me mad. Everton three times in the second half counter attack four or five on two or three. Alisson’s save is magnificent but the passage of play that leads to that save leads to Evertonian legs marching and Liverpool dropping.

This, this here, is the Evertonian thing. You don’t want to lose here, lads. In a way, the disallowed goal offers the same thing — Goodison Park was, in general, quieter than usual for us but when St. Helens’s finest Conor Coady hits the back of the net they find bedlam. When the goal is chalked off (corrupt to the core, lad) because Coady is a yard offside it reminds us all of what it would mean to lose here.

Before then James Milner has been on at right back and all at sea while Harvey Elliott is hanging on for dear life in centre mid and it was a relief to see Joel Matip come on because it felt more sensible. Even then, with Diogo Jota, Liverpool seemed far more likely but it wasn’t to be.

Not to be. Hasn’t been to be four times this season. But it has also, at times, been tough to comprehend and that should be the main issue, the main question. Liverpool look a long way away from finding their way home. Indeed, I still don’t know who is meant to be providing a platform for who. That isn’t to suggest a lack of effort or even a shortage of ideas. It isn’t to say that Liverpool are currently 10 pianists and Alisson Becker trying to move the thing.

It is to say, though, that Liverpool have created for themselves a whole host of new questions and do currently look short of answers.

Because the thing which is both the football and not the football is that a point at Goodison Park isn’t bad. For any Liverpool side, ever, it isn’t bad. But two wins from six is bad, two wins from six a season after 92 points is bad. It will get better, for a variety of reasons it will, but how long and what it gets better to is the key question for everyone to answer.

Too many hurdles hit, Liverpool. There’s 32 to clear. Start clearing them.