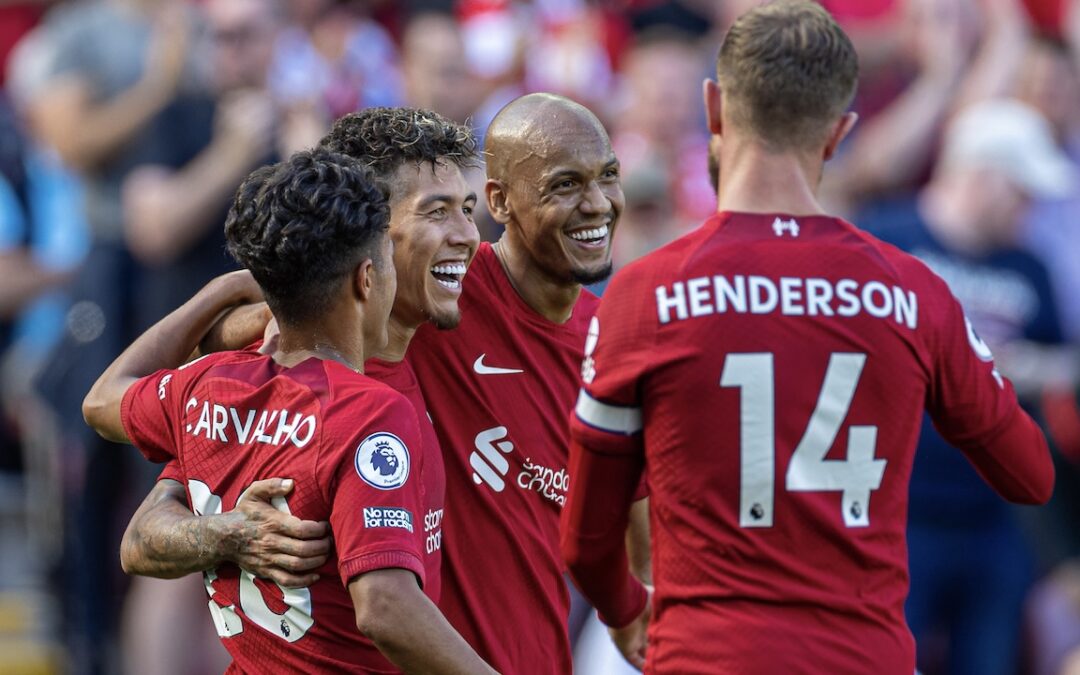 Neil Atkinson’s post-match review after Liverpool 9 Bournemouth in the Premier League at Anfield, and you don’t get many nines…

WELL, well. You don’t get many nines (NINE)s.

The highlight might actually be Virgil van Dijk getting the ball when it goes nine. Virgil hurrying them along. Because, he knows, you don’t get many 10s either.

That, more than anything else, summed Liverpool up today. Someone was going to get it and Bournemouth got it. With all barrels.

The idea that it goes nine and your senior centre half doesn’t have any time for this celebration nonsense is perfect. It epitomises something the manager said yesterday – we defend together and we attack together. And we score nine and want to make it 10 together seemingly.

I’ve been worried and it is possible that by the end of Wednesday I could be again being fair, but what’s worried me is what often worries me about football teams — not being an art project. Not having a look at something different for its own sake. Today wasn’t for its own sake. It was for ours and theirs, the only sakes that matter.

Therefore the 45 minutes of Harvey Elliott off the right looked brilliant but was also effective. It created space and possibility and the switch cross helped. Elliott nailing the second unerringly was the biggest weight off and his celebration was glorious. I love what it means to him. I love how much he loves it, loves playing for this team. I love that precisely because he isn’t from the city, he’s adopted it and I’m reminded of John Gibbons’s maxim that all the best Scousers moved here.

Roberto Firmino created those two goals, Elliott should have created for Mo Salah whose afternoon was, under the circumstances, hugely comic. Salah was so bright and so progressive in everything but when Liverpool scores nine he gets zero. He’s saving them for Wednesday and Saturday.

We got to see what it looks like when Trent Alexander-Arnold picks the ball up centrally and drives. It was the perfect shot from over 20 yards, a defence panicking and back-pedalling not set and the weight must have come off his shoulders too as he hits the back of the net. He’s been toiling but not today. The graft was present but so too was the stardust.

Firmino gets his own brace and his every touch was to be cherished. He too drives forwards and shoots from over 20 yards as Bournemouth retreated and it drew the corner that led to the Virgil Van Dijk header which made it five. Five! In forty-five minutes Liverpool were home and hosed and Elliott could focus on the next two. We aren’t going backwards. This is the new normal and it is good to see it be realised in purer form.

Convention says these sorts of games end up having pedestrian second halves but Liverpool weren’t up for that. Absolutely not. Not today. Substitutions could be made and it was fantastic to see Arnold, Kostas Tsimikas and Fabio Carvalho link up for the eighth, Carvalho getting his first goal of a glorious Liverpool career.

Bournemouth couldn’t put any spell together which could offer solace. They couldn’t get Liverpool’s foot off their throat. The world isn’t supposed to work like this but Liverpool weren’t to be denied whatever they desired.

Jordan Henderson didn’t want to come off. Roberto Firmino may well have got his hat trick had he stayed on and while his every touch was today to be cherished, his exit suggests he has at least one more big assignment this week to come. Stefan Bajcetic and Bobby Clark got to make debuts under the kindest possible circumstances and I am pleased for both of them.

It was a good day for Joe Gomez who was the most in the action defensively but it was his passing that shone. In general, Liverpool struck through the ball, began to miss men out and turned defence very quickly into attack. Gomez embodied this from centre back. He’d be my favourite player if it wasn’t for the reality of Mo Salah, but today they were all favourites.

You don’t get many (NINE)s.

“9 nil! The reds were fantastic from start to finish. It was a performance that makes you fall in love with them all over again.”