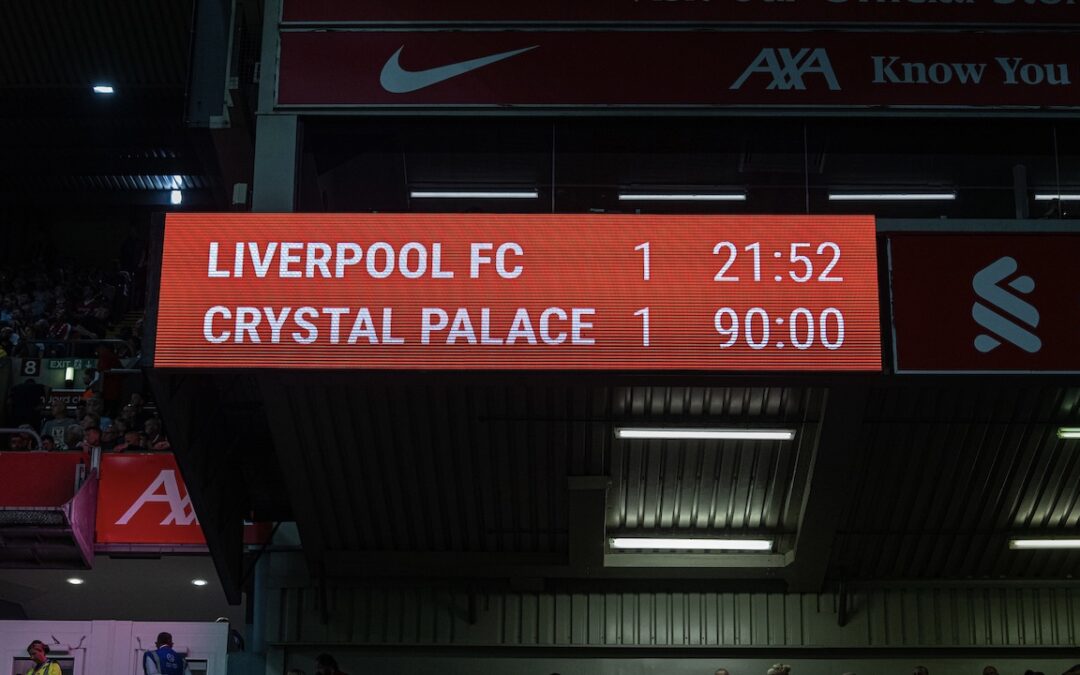 Neil Atkinson’s post-match review after Liverpool 1 Crystal Palace 1 in the Premier League at Anfield, as The Reds let another two go…

This isn’t a plea to sign a million players. It’s a desire to just get it done with a minimum of fuss and discuss the mitigating circumstances later.

Tonight they get to the final third over and over with 11 but look short of ideas, short of simpatico when they get there. It drives you mad. Liverpool are nearly good over and over. Nearly there. But, ultimately the gap between Salah, Diaz and Darwin is too great.

Until, and bear with me, they go down to 10 men. At which point they look like men possessed. They look like demons. The gaps are closed. They find each other. The crowd is brilliant. Crystal Palace’s end shrinks. They are suddenly panicked. They could lose.

They possibly should. Liverpool are brave and bright and together. First to everything, filled with purpose, flexible and sure. They aren’t perfect but they are dominant. Palace carry a threat but it is the same threat as when they had 11. It is based on the break.

Even that is mitigated by Joe Gomez. Gomez makes it easier for Liverpool to be Liverpool. Nat Phillips didn’t do a lot wrong, but he had a massive red arrow over his head with and without the ball. He could be got at and was.

It’s a great goal, the Crystal Palace goal. So many players get things on the margins just right, but the feeling persists matters are different if it is Gomez not Phillips.

For the 10 after Palace score, Liverpool are appalling. Everything is wrong. Trent Alexander-Arnold, who looked marvelous and who is great after Liverpool go down to 10 men, is dreadful for 10 minutes.

Fabinho finds moving the ball difficult. He’s taken out by Eze’s excellence for the goal — and if you want a transfer chat, hello — but he can’t quite regain his equilibrium before the break.

The second half is too pedestrian for my liking until the red card — Liverpool waiting for the changes that they expect to come.

The red card is both daft and the best moment of Wigan’s finest Paul Tierney’s life. I wouldn’t want to give him the satisfaction and that is my frustration. Tierney is delighted and Tierney is fucking last and Tierney is right enough and I am sick of referees from Greater Manchester bouncing around this division.

But Darwin gave him the satisfaction and we all need to contemplate the sound of The Courteneers blasting from Tierney’s car as he heads home. Nineteen forever.

The equaliser is marvellous. When he strikes it I say “don’t do that”, honestly it is mad you read this nonsense.

But Luis Diaz had been poor and disconnected with 11. With 10 he was essential. He was everywhere. There is something in that. He’s ready to be one of Liverpool’s three centre forwards they pick every game. Mo Salah the same with ten. But Diaz’s finish was a thing of beauty.

Liverpool need to contemplate four dropped but also four unearned. That’s the concern. This isn’t hard lines or bad refereeing or any mitigating circumstances. Honestly, it isn’t and can’t be. It’s a bad start and it needs to be recovered from quickly.

It’s poor. It really is.

Two hurdles down. They are down because Liverpool haven’t cleared them but smashed into them. No more damage, Liverpool, no more mitigating circumstances.

Just one step in front of the other. Be certain in your stride, not experimental. Ten shouldn’t be better than eleven. That makes no sense.

Start making sense. Anything is better than this.