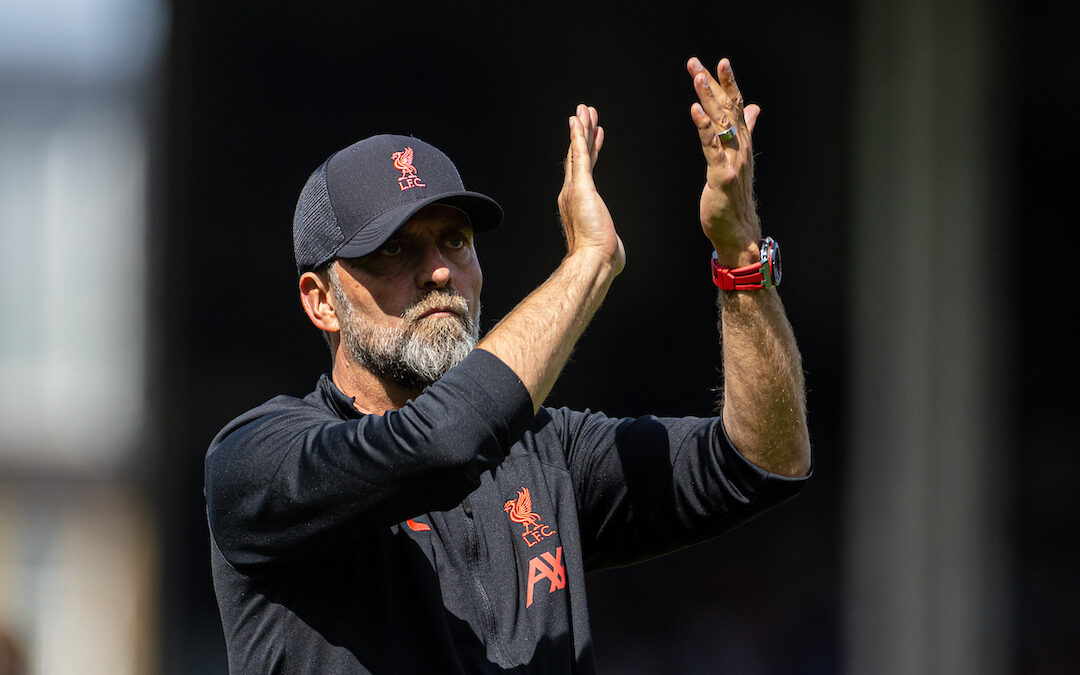 Neil Atkinson’s post-match review after Fulham 2 Liverpool 2 in the Premier League at Craven Cottage, as The Reds stuttered to start the season…

THAT was two dropped. Two that hurt. Two that kill.

Dropped points are the worst. It isn’t about complacency. It’s about knowing and understanding the bar. The bar is so great now. There is no room for manoeuvre.

You can make the point that a point is OK after how poor Liverpool were for 55 minutes. It’s valid, but it is also two dropped. It is a snooker.

The best thing, in a sense, is there is no end to Liverpool’s disappointing individual performances. This wasn’t about one or two, it was about a mass showing that was inadequate at best and dreadful at worst.

Who wants to criticise their heroes? Yet Alisson Becker, Trent Alexander-Arnold, Virgil van Dijk, Thiago Alcantara, Fabinho, Jordan Henderson and Roberto Firmino are all a million miles away for 55 minutes. They have all been, in different ways, my favourites. Our favourites. But that first 55 showing was painful. Historically painful.

Under Jurgen Klopp, Liverpool pull off a high wire act. Everything needs to be perfect for it to work. It’s tough and demanding. Today it was too tough, today too much was demanded. But I am with the system.

The truth is that today would have been far more explicable had Liverpool not been dealing with one of the best teams in the world last weekend. Had we found Manchester City unbearably tough, then today would make far more sense. But Liverpool, for 55 minutes, couldn’t live with Fulham’s press.

It hurt. Today Liverpool’s midfielders looked old. All three of them. They looked short of joie de vivre. This is so rarely the case but there it was. Liverpool have a host of midfielders but they played their first choice ones today. Liverpool could have bought a midfielder in the summer but today they’d still have played these ones. Liverpool’s best midfielder minute by minute was their oldest, James Milner, who ends up at the heart of everything good.

The truth is that for most games of the season the manager should pick two of the three of those who start this one. But the third needs to shift it differently. Liverpool went up gears through the second half and one such move was after Fabinho went off and Jordan Henderson went six.

Fabinho is remarkable but he isn’t unimpeachable. Henderson is captain but he isn’t essential. These two sharing the position at six (or playing with each other in a 4-2-3-1/4-4-2/4-2-4) isn’t the end of the world and sometimes one will suit more than the other.

Thiago Alcantara goes off injured which is obviously a massive blow, but Liverpool need two of the three; not all three.

All this said, Mo Salah was marvellous. He loves Darwin Nunez. He isn’t alone. I love him too. Luis Diaz is doing his own brilliant thing, but Salah/Nunez already feels very Dalglish/Rush. Salah is the best footballer in the world. He is the one. He will be the business.

This will all get sorted out, I know it will. But today it is two dropped and I am grumpy about it.

There’s 37 hurdles left. And we have hit the first one hard.