Trouble In Paris: The Wider Impact On Liverpool FC & The City 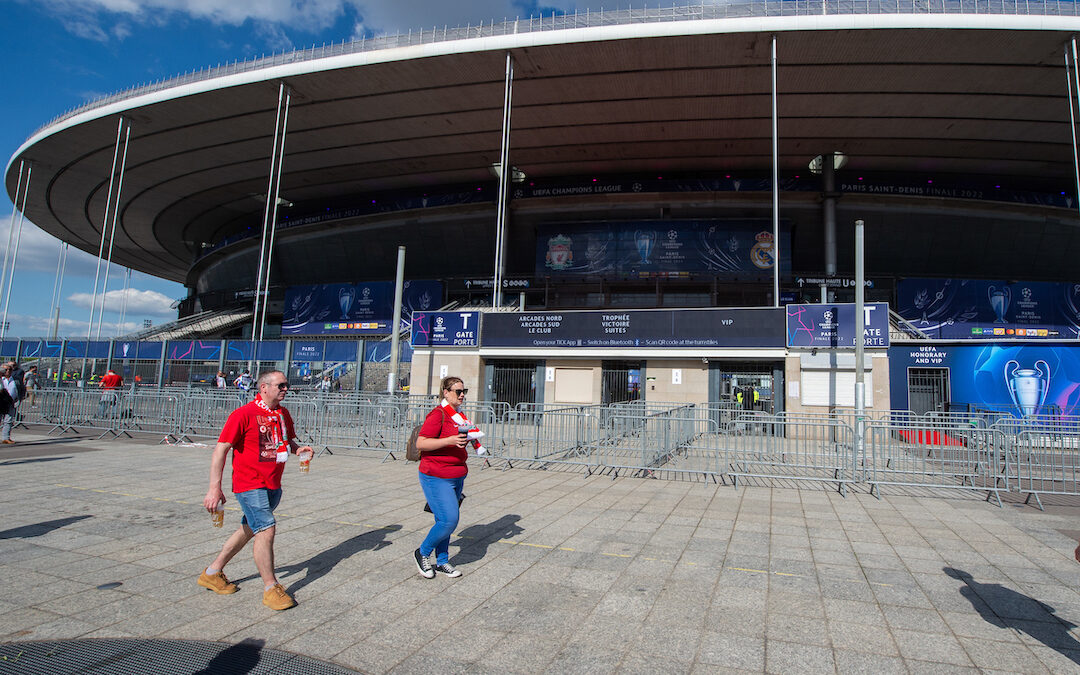 Considering the wider impact on Liverpool, the club and city, that the trouble in Paris has caused at the hands of UEFA, France and its police…

POINT of order: I wasn’t there.

I don’t get to have that utterly terrifying experience and for that I feel lucky but also guilty.

Guilty to not be able to help and to stand with others. But then, if I was, I’m just one more person in a long line being herded like cattle into a bottleneck of history repeating.

Paris for the Champions League final should be a safe place. Yet progressive policing and trust remains a myth to most. I’ll write you a thousand words on why Shevchenko Park was so special in 2018 and a running theme will be we were left to police ourselves without fear or intimidation.

And then the rhetoric of preciousness, of “well there was no issues at the Madrid end” and of devastating untruth when it comes to arriving at grounds late and intoxicated.

They do it because it’s easy to hate, especially a group who dishonoured the crown. Appallingly, some of it has again come from our own city which is beyond unpalatable and leaves you wondering what’s next on that front.

Football has once again eaten itself from within when it comes to matters which have and will impact us all.

History will mark this event different to most, as the footage doesn’t lie. Nor too, will the local, national and international journalists present who have stood up and used their platform correctly.

What was ignored by UEFA and French authorities is that their attempts to strongarm and almost cause a major incident went beyond football fans alone.

In casting a net of intimidation and incompetence, they caught media, TV personalities and corporate sponsors who will all now, with fans, demand truth and accountability.

At this point it’s worth asking what we’re left with. A season on the brink indeed, a shoestring between success and, well, not as much success. But this isn’t a conversation regarding the validity of two trophies. I’m talking about your place in this.

Why — after objective truth can be provided in a way which it wasn’t 30 years ago, with the use of phone footage and instant, accessible testimony — do we still have people choosing their own lies?

Why can they look at young children petrified and not feel empathy and fear it might have been their own?

Why must we put up with the shite that surrounds football and is indicative of everyday hate and false narratives to force a certain agenda?

I’ve heard many Reds say “that’s it” when it comes to finals, one or two questioning whether or not they’ll go again in general. Football can be a lonely place. You might see or hear or feel things at games or in bars you don’t resonate with. Experience and culture can often leave you with more questions than answers.

It requires identity. It needs to be something of value in your life and that was taken away from so many by an external and unnecessary body and for that I’m devastated.

Yet, after all of the turmoil which ended with losing a European Cup being a subheading, consider that you’re left with your sense of place from a city that will stand up for itself, its team and its manager when they need it.

On Sunday, Liverpool came together in unity and strength and offered everyone in red a sense of community.

The day after the night before gave a truer reflection of the season and journey under Jurgen Klopp because it exemplified togetherness. It required the need to pull each other through a tough spot.

This club and this city will need each other even more in coming weeks. There will be more smears, more doubt and more need to reinforce truth.

If you still want this in your life, then let the belief you have in this entire enterprise be your truth and your guide. It’s what got us to this point of our supporting lives and will carry us to the next.

If that isn’t enough, then people will need to be helped and held up by those around them to ensure they’re supported. There are places out there for that help and I’m sure that will become highlighted more in the near future.

Saturday’s impact will last way beyond the confines of 2021-22. There’s now another fight to be had off the pitch as well as on.

Sunday showed when it matters, nobody at Liverpool will be made to walk alone.

“Every exit is blocked off by a wall of riot police. You end up getting tear gassed just looking for a way out.”

“The police make sure you’re taken miles away from any direction you wanna go and then you’re just left to be picked off.”