Why Liverpool Fans Are Viewed As A ‘Problem’ 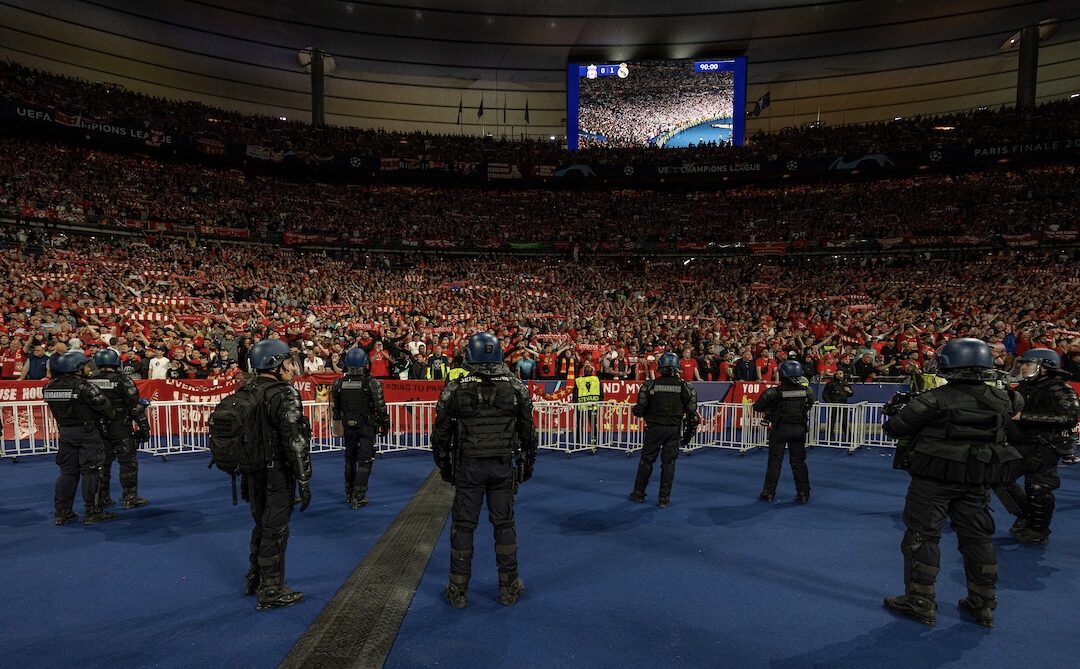 French Ministers revealed that they thought Liverpool fans would be a ‘problem’ in Paris, but why do the same stereotypes carry through today?

IT’S strange how anger takes over from fear then relief.

Following last week’s events, I’ve been through all three of those emotions but anger is very much in the current hotseat.

Fear opened proceedings as I had people at those turnstiles (and by no means all of them young) who were in danger, followed by relief when they declared their safety. Only then did ire rise.

There’s a shelf life to that. It can easily be ended by confession and apology. There’ll always be a bit of resentment but an admission of wrongdoing at least offers some grace. Silence, however, compounds the issue. Look at Jake Humphrey.

The BT Sport frontman, with the world watching, leapt to a Heysel reference and the incredibly offensive and trite throwaway line ‘I thought we’d got past all this’ mere minutes after the first kick-off delay announcement.

Clearly, something had gone wrong outside the ground. Humphrey had a producer in his ear during the whole broadcast briefing him throughout. He even had his own parents and fellow presenter Lynsey Hipgrave caught up in the melee outside and he still went to Heysel for a comparison.

That’s an instinctive thing and he was caught up in a live broadcast hurtling head first into chaos. I get that, but he’s since had the opportunity to address that issue. He just had to say ‘I got that wrong and I apologise’. He’s had a whole week to do just that and he’s been urged to do so repeatedly on social media.

He has taken some steps, however. Tweeting that the statements of the French government do not tally with what he learned later and has retweeted Lynsey’s experiences outside the ground, but nothing about Heysel or equating our behaviour to those of yesteryear. That stays.

It would be wrong to say that Humphrey is solely to blame for any of this, in the same way that Kelvin McKenzie didn’t directly cause Hillsborough. It’s the attitude and culture that stinks.

Sure, the world is laughing at the antics of the French senate and can see through their web of lies, but it’s interesting that in the first minutes of confusion, the fingers were firmly pointed in our direction. Straight to Heysel. No apology since.

Heysel hurts and though most references to it are uttered in the interests of point scoring rather than genuine disgust these days, Liverpool fans acknowledge our role in the horrors of that night. Not all by any means (hi UEFA) but enough. Heysel hurts. It’ll always be there and there is general contrition from anyone who was around at that time. People died and that’s the bottom line.

And people were convicted — a fact that tends to be forgotten when the word ‘justice’ is bandied around in mid-April. Fourteen people served sentences along with the Head of the Belgian FA and two police chiefs for that. You can argue about the length of sentences but people were tried and convicted. The law took its pound of flesh.

More people served time for Heysel (collectively about 40 years) than for Hillsborough (collectively zero). Look at the makeup, background and positions of those responsible for both and ask yourself why.

And this is why anger is the dominant emotion nine days on. We went through the shame of Heysel and the injustice of Hillsborough and thought that would be enough. Surely the world has learned and with the advent of smartphones, CCTV and social media, no one can get away with cover ups anymore.

If his testimony wasn’t so hurtful it would be comedic. He reminds me of the MP on the Fast Show who denies absolutely everything.

Every word spoke of diversion and bluster. They fucked up and they knew it. I laughed out loud at the comparison of the events of Wembley for the England-Italy final. Yeah, mate. Loads of Reds were in that end. Thousands.

Kudos to the other senators and the French public who mocked him following whatever the hell that was supposed to be.

Then UEFA issued their apology. It came a few hours after Real Madrid announced the experiences of their fans and that can hardly be a coincidence. If Madrid are annoyed then they had to do something. Liverpool? Let’s leave it for a few days and see if it’ll blow over. The same credo Darmanin is probably clinging onto now.

The apology said nothing about blaming it on their claim that the delay was due to late arrivals, when all the evidence around them told them that was untrue. They lied then and refused to apologise for that lie, but it doesn’t matter. They’ve spoken, blamed the French police and can hide behind closed doors now. We’ll play in their primary competition next year and make them millions.

At time of writing, not one of our own Government ministers has spoken out about Darmanin’s verbal ordure. Not one.

More people served time for Heysel than for Hillsborough.

I agree with Neil’s comments in the week about us not being problem fans in Paris but we are now, but we can’t win. Last week I called upon fans of other clubs who travel regularly, particularly in Europe, to show some support. Paris didn’t happen because we’re Liverpool. Paris happened because we’re football fans. Most can’t see that though and used the events as a free beating stick.

I can see why, in some respect. Liverpool fans have a character that most others lack. I could describe a Liverpool fan in the same way that I couldn’t really describe, say, a Reading fan. We stand up to the highest in the land and, yes, are quite unbearable at times. That energy isn’t for everyone and I fully understand why people wrinkle their noses when I tell them who I support. We’re not for everyone and that’s fine.

But if something like this happens we’re either ‘wallowing in their fabled victim status’ (as a national journalist and broadcaster said to me in 2007) or refusing to accept blame for any wrongdoing.

Trent Alexander-Arnold didn’t sing a song in Hungary on Saturday. There are many who are more up in arms about that than what happened last week. The world’s gone mad.

And it’s exhausting. I’d like to be concerned about Mo Salah and Sadio Mane and I’d like to be thinking about the fixtures for next season and whether I can get to the Community Shield, but I’m still furious at a government minister I hadn’t even heard of a week ago.

But I’m also proud of how we’ve elevated this debate and how we’ve stood up. Friends of mine, friends of ours, have gone above and beyond their duty to redress those lies and provide evidence as to the contrary.

Problem fans maybe, but we didn’t start this war. We just want to watch our team without being smacked around by authority after authority, backed up by unwitting stooges on screen.

A problem fan? If it comes to this, I’m happy to be so.

Earlier today @Knox_Harrington was on @SkySportsNews to react to the lies told by Darmanin and Oudea-Castera about LFC supporters at the 2022 UCL Final.