Trouble In Paris: Why Now Is Not The Time To Be Tribal 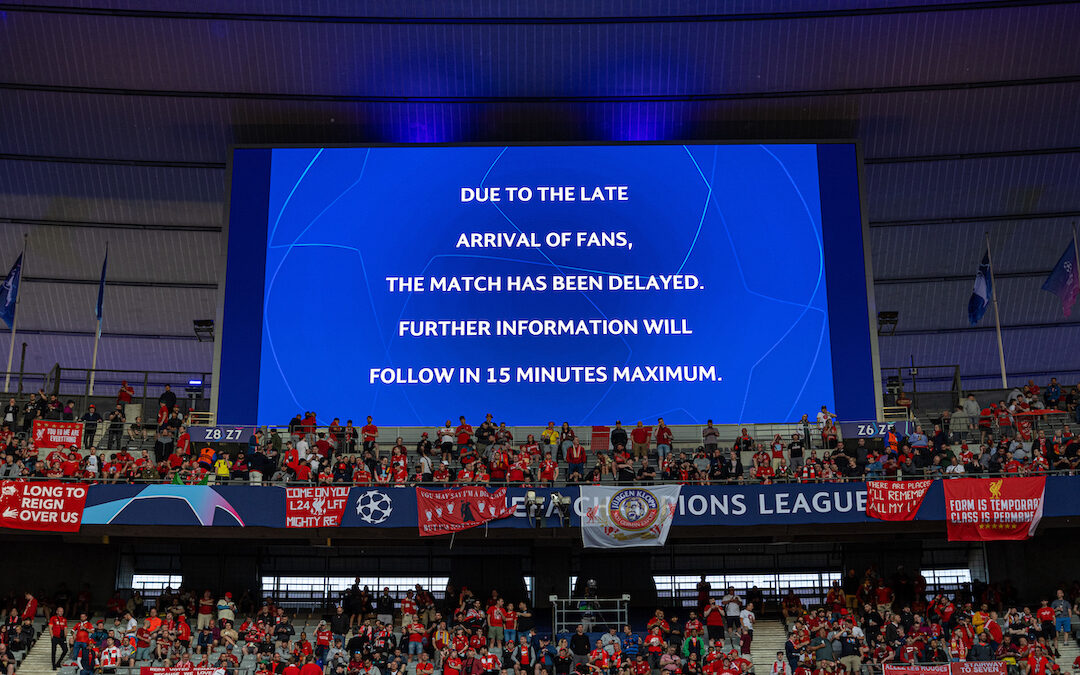 As rival fans let Liverpool stereotypes rule their judgement over the trouble in Paris, they must support now or it could happen to them…

That should have been my waking thought on Sunday but, given what happened beforehand and afterwards, it was a secondary concern.

I wasn’t there, but I’m on several WhatsApp groups with mates who were. Throughout the day I was the unwilling participant in conversations about where x was and what bar they were all meeting in. I had my own plans and was more than happy with them but you see the pictures and wish you were there all the same.

I watched the events unfold in real time as people I love and admire became more and more frightened. Come the end of the night the match was just a bog standard game. I’m just happy that everyone got in and out safely.

Of course, The Anfield Wrap’s contributors were there in numbers so I’ll leave them to tell their own stories. I went to the pub, shouted a lot and am paying for it today. That was my Paris.

The events themselves were obviously horrific but the speed of what came next compounded them. The screens announcing that the delay was due to fans turning up late was eerily familiar. Blame the fans first.

That would have (and has) worked in the past but social media soon put paid to that lie with dozens of videos of people queuing hours before kick off, so they changed it to ‘fake tickets’. Someone took a decision to alter the narrative and it was snapped up.

UEFA have since blamed the local authorities. Finger pointed at every chest but their own.

What came next was as predictable as it was sad. Outrage is one thing but fake outrage is odious. People saw crowds, people saw Liverpool and people reached for the button marked ‘stereotype’. ‘No smoke without fire’, ‘they were trying to jib into the ground’, ‘typical Scousers’, and all delivered with a sort of angry glee.

None of this was genuine indignation at all. We all like to take every opportunity to dump on the enemy, even though hard evidence points to there being no case to answer, and if we can add to the level of hysteria and blame then all the better. Few people looked at the facts.

I can get on with the idea of rivalry. There are certain teams, and not just the obvious ones, who I just can’t abide. That’s largely based on history, culture or more than likely a perceived slight. That’s part of the joy in all this and it’s more than fine. After all, I’ve done it myself this very weekend. Let’s just say the Championship play-off final didn’t go my way.

I’ve no love of, say, Manchester United, but I’ll gladly have a pint with anyone who travels to see them.

There’s an unspoken camaraderie to the match-going subculture despite the veneer of suspicion and hostility that goes before it. After all, we all traipse up and down motorways and have our favourite service stations, etc. Also, someone somewhere knows what’s the best pub before Aston Villa away and I’d happily exchange that knowledge with an inside track of a decent place near Molineux.

This edgy familiarity occasionally extends to the match itself. In the mid-90s I was at an engagement party for a girl in work. They were both from the North East so there was a Newcastle contingent present, and I met the groom for the first time and shook hands. He picked up on my accent immediately.

‘Where are you from, mate?’

He thought about this for a second, clearly pondering what his next approach would be.

More thought. I feared the worst. Was this going to be the hubcap jokes, the ‘keep your hands on your wallet lol’ or something much, much worse. We got on pretty well with Newcastle back then so I hoped it was going to be a minor taunt. Finally, he nodded to himself and plucked up the courage to say what was on his mind.

‘Your problem is your full backs. See, Jones is great but he’s got to stay at right back. You can’t just play McAteer there to fit him in somehow.’

I loved that and I hated myself for my earlier suspicion. He clearly had a theory about another side but had no Red to share it with until I appeared.

I don’t think that goes on so much anymore. Football rivalry is too toxic and any logic has all but evaporated. They don’t even realise how weak their barbs are.

There are people laughing at us for not winning four trophies. No one else won two this season including them, but that was their lead. ‘You only won two trophies.’ To be honest, I’m fine with a minimum of two trophies per season. I’ll take that for the next 10. And so would they. Weird.

Of course, I understand that and the relief that comes with it. I’ve celebrated United cup defeats like our own victories because you don’t want them to do well or, back then, become even more dominant.

It’s the darker side of it, the off-the-pitch stuff, that’s so utterly depressing. There’s time for that rivalry to take a backseat and that’s when the inept stakeholders of the game turn their blame onto all of us. Not just Liverpool. Everyone.

Match-goer versus match-goer? Taking sides with an overzealous and violent police force over what could have been you and yours had you been there? I’ll never get on with that.

And the maddening thing? Had that been any other club we’d have supported them in their endeavours to point out the wrongdoing. Not everyone has our history of travelling on the continent, but we know all about being herded, poked and dehumanised by the authorities. It’s the governing bodies we should be looking at, not each other.

It’s the immediate and erroneous shift of blame that we’d instantly recognised and would be up in arms about regardless of team colour. Oh, there’d be some blame attributed too as we all have our own stereotype button to push but, in the main, we know that Saturday was not an isolated incident. It was just the most documented. Seville, anyone? PSV a few years ago?

There was little support at first. Instead, we got the opposite.

Liverpool are probably the most hated club in the Premier League now. We can’t win. Get tear-gassed on foreign soil? No smoke without fire. Groups of people mugged while the police looked on? They were probably the ones doing the mugging lol! Even when we’re quiet it’s ‘where’s your famous atmosphere’.

I’ll hold my hands up here. I’ve struggled to write that last paragraph and I’ve changed my mind several times about including it as it looks like I lie awake worrying about not being liked. That’s not the case.

We are hated but we take a certain pride in that. People were up in arms about the national anthem thing and though that is (again) largely fake indignation, I like that my people stand up and voice that view.

That doesn’t always make me popular in some circles, but, then again, I don’t particularly want to be accepted by people who despise us. It just seemed more of a chasm between us and them over the weekend and everything they said went largely unchallenged.

‘Football is nothing without fans,’ goes the adage. If Saturday can happen to us it can happen to you. You might think you’re too well-behaved or less raucous or whatever, but so did everyone else there including every kid who was gassed by a psycho with a canister and a badge.

Hate us all you want but if that approach to policing is ignored, it’ll be you one day and not necessarily abroad.

That said, I do wish we’d won the European Cup.

“It’s unnecessary that in 2022 this sort of nonsense is still ongoing. It’s depressing that people are happy to swallow what the authorities are saying in the immediate aftermath.”