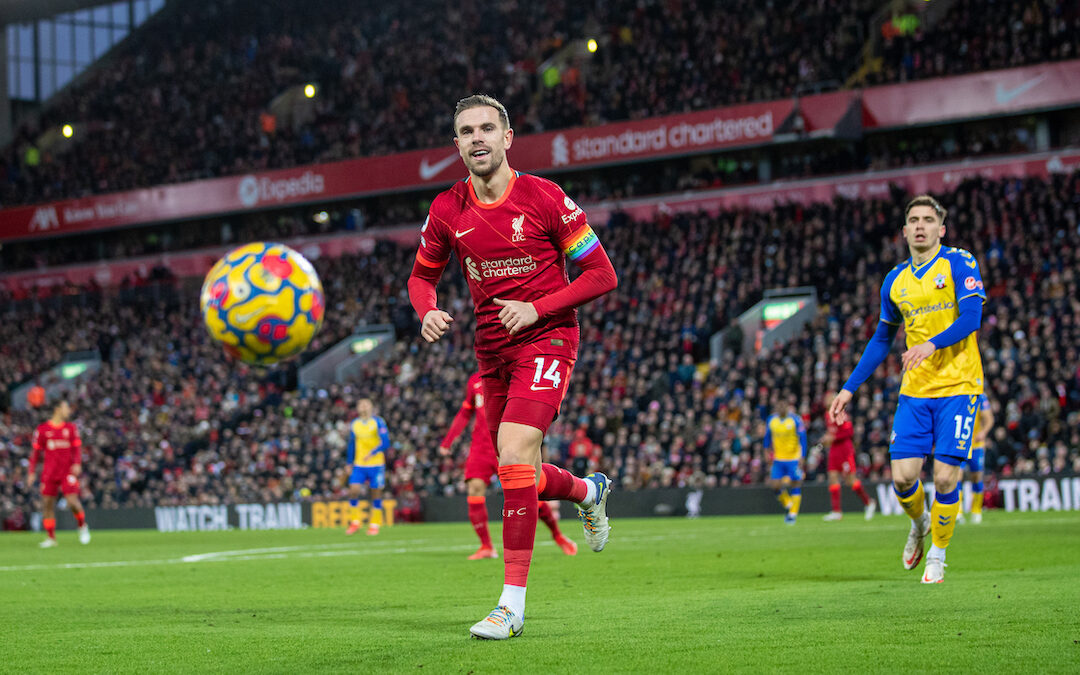 The Anfield Wrap’s match preview ahead of Southampton v Liverpool in the Premier League at St. Mary’s, with The Reds looking to close the gap…

Unlikely heroes with the ability to make time stand still.

Wembley erupted, One Kiss played, and raw emotion poured out of every person in that Liverpool end. You question over the course of the game why you do it to yourself, and then Tsimikas scores and you have your answer.

They had done it; the FA Cup was coming back with a group that deserves the world. The missing piece of Jurgen Klopp’s trophy cabinet was complete, and a 23-year-old Trent-Alexander Arnold had won the full set with his boyhood club.

It’s hard to comprehend how impressive an achievement that is when we witness his brilliance week in, week out. We should really try to never get used to any of it.

Perhaps it is the cumulative pressure that has been building as we head into the final weeks of the season, but this one felt absolutely massive. Celebrations continued in Liverpool and across the world over the weekend, but as the player’s plane landed, it was time for the attention to turn to Southampton on Tuesday night.

How on earth are they meant to play another game of football after that? They’ll simply have to find a way.

Luckily finding a way is something that Liverpool have become accustomed to. It will stand them in good stead coming up against a Southampton side who have had 10 days since their 3-0 defeat to Brentford. Ten days to watch Liverpool play three games, to rest, to analyse the opposition and to train accordingly.

Coming up against a well-drilled team, Klopp admitted he’ll have to make “a lot of decisions” when it comes to the starting lineup, particularly when it comes to a backline that tends to pick itself.

The hopefully precautionary substitution of Virgil Van Dijk caused concern, and the manager has confirmed he won’t be risked tonight ahead of another final in less than two weeks. Ibrahima Konate and Joel Matip proved a solid duo on Saturday, though, and will feel comforted by the presence of the goalkeeper behind them.

Playing both second-choice full backs together is usually perceived as risky, but with Andy Robertson coming off with cramp and Trent Alexander-Arnold playing 120 minutes of football at the weekend, it may be the preferred choice to ensure freshness.

Moving into midfield, a notable effort to involve Curtis Jones more in recent games suggest we’ll see him in the starting lineup, while Naby Keita starts on the right. It’s not ideal to play anyone that has 120 minutes in their legs, but with Fabinho still out, Jordan Henderson is likely to have to go again in the holding role.

Mo Salah going off injured was a scare on an otherwise dream day, and he’ll be rested tonight ahead of the final game of the season. Yet with Roberto Firmino back, there’s plenty of options to choose from in attack, and the Brazilian will take his place in the team tonight.

Once again, Luis Diaz was the best player on the pitch on Saturday, and wasn’t showing even a hint of tiredness when he was taken off at the start of extra time. I expect him to play on the left tonight, with Diogo Jota completing the upfront trio. We might even see an appearance from Divock Origi…

The beauty of this team is that we know whoever is involved tonight will give their all. We know that because we’ve seen it time and time again. They’ve shown us that we can trust them, and that they deserve their moment.

Everything we have won, and may go on to win, this season has been down to each and every one of them. They all deserve a medal, but at the very least they deserve our recognition and they have it in bucketloads.

Get over the line just three more times, and we’ll see where it leaves us.

The season of a lifetime continues.

“Whoever we throw in tonight will give everything and will feel part of it and that’s rare in football. That’s something that Klopp and the coaches have managed to breed.”