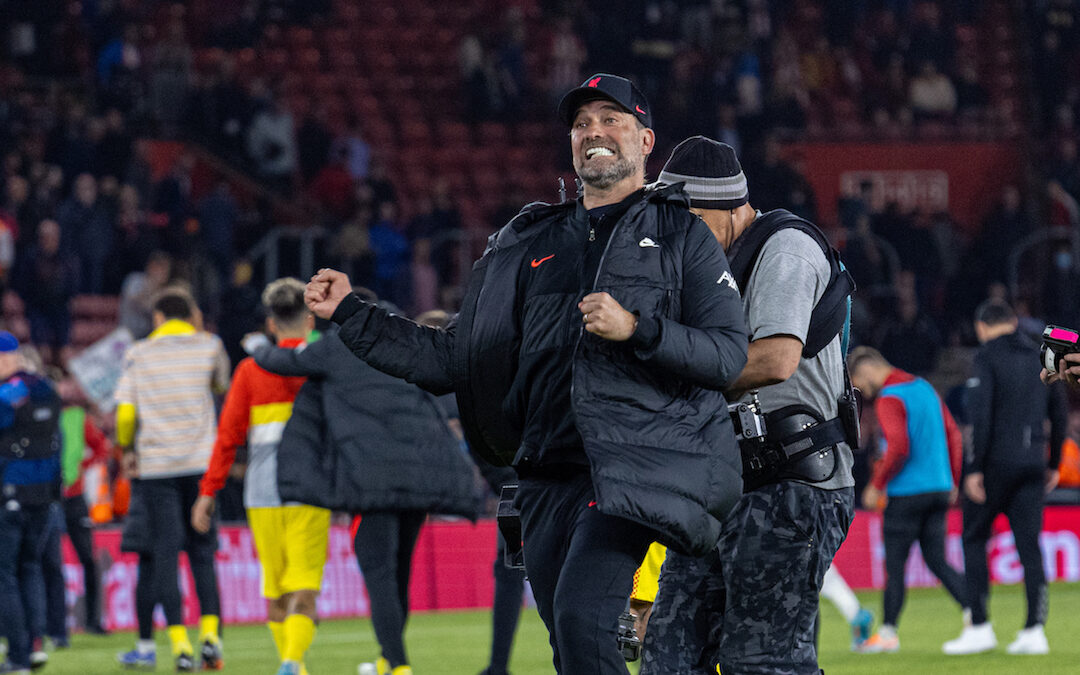 IMAGINE being chased by Liverpool.

It’d feel exhausting. They make a ton of changes, undoubtedly weaken on paper, become a side that has never played together before. They go a goal down, a deflected goal down, a flukey goal down. They win. They still win.

They still win and they maintain the air of winners. Tonight Curtis Jones and Ibrahima Konate were outstanding but not because of any one, just outstanding in their certainty that they were constantly contributing to a Liverpool win.

Winners were everywhere but those two put in stellar performances. All the changes and there they were standing up and being counted over and over.

Their opener was jammy. It was right in front of us, clips of James Milner and there was nothing that could be done. It was a crunch moment. It would be easy for the players to have a moment of feeling sorry for themselves, but not a bit of it. They never looked around at one another. They shrugged their shoulders and restarted.

It is yet another testament to their sense of togetherness. They find themselves in another tight space and play their way out with assurance. Southampton fell back on themselves and found their own space constricted. Liverpool moved them left to right and pinned them back into areas and everything went their way.

Takumi Minamino finished with some aplomb, thrashing the ball into the net with power. Minamino’s Liverpool career could well end up being very odd. If things go our way on Sunday he will have played a key role in a domestic treble without ever having been first choice.

But isn’t that the point? The manager may like a small squad but he has been brilliant with a larger one. He has kept everyone involved, kept everyone purring and then had everyone be able to contribute at a key time. Today Joe Gomez and Kostas Tsimikas were rock solid, Harvey Elliott was bright and the aformentioned Konate, Jones and Minamino all played key roles.

As did James Milner in two different areas. There is a level of reliability which is hard to understate the importance to manager or teammates. They know he will look after ball or space brilliantly for them.

The winner comes from Joel Matip doing what he has done all season. The introduction of Jordan Henderson becomes no bad thing. He keeps it ticking and ticking, shifts the ball left and right and becomes part of the great penning in.

It became nervy as we got to the last five solely because we hadn’t killed the contest. If there is a note for next season — kill more games off earlier, Liverpool.

But Liverpool win their final semi final of the season. They take everything legitimately to the last day. It is one thing to play 38 league games, another to play them wanting to be champions in every single one.

Yet Liverpool have. They have done it in all four competitions. Taking stock of all of this will actually prove hard. We are in it, living it. Them and us are just constantly broiling through games.

The achievement is monumental and every single member of the squad and the backroom staff have played their part. The sheer weight of pressure, of every game being at the edge and not breaking is absolutely magnificent. We’ve never had a side and set up more hewn from iron and rarely for 30 years had a side as human.

They have been our heroes. They have stood strong. From here what will be will be. But what they will be is the best version of themselves which is what they were tonight. They’ll be up to it and up for it. They’ll scrap and fight and find a way.

Imagine being chased by them. You’d be up nights.

“Liverpool have got a MASSIVE three points at Southampton! It was a dog of a game, and the lads did brilliantly.”