Why Liverpool Will Define Their Own Success 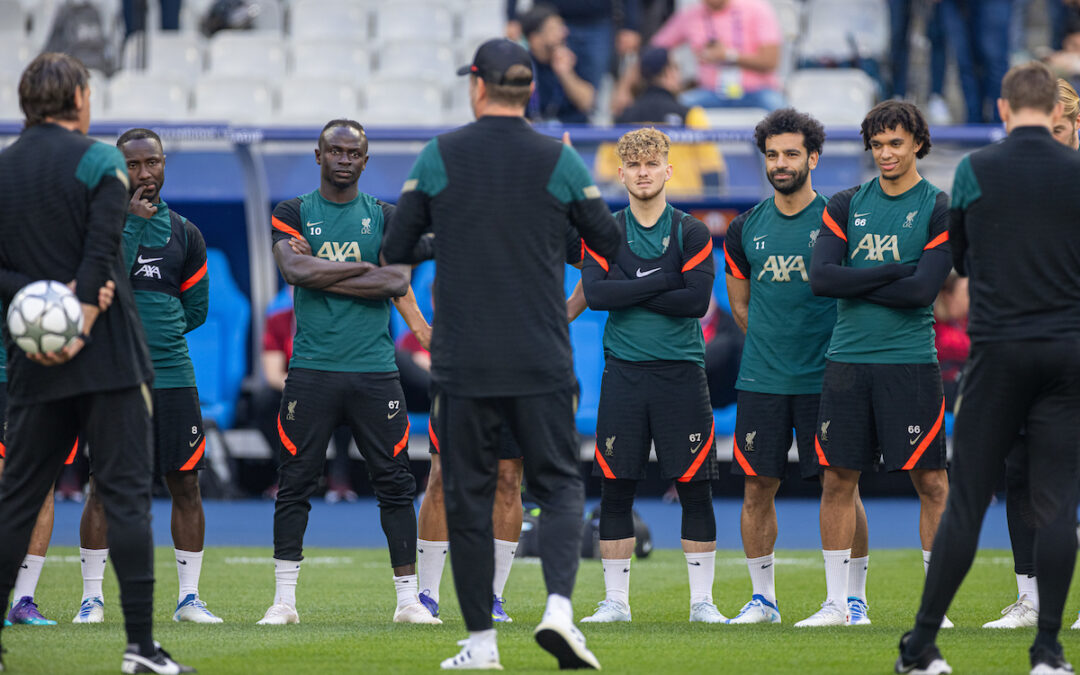 Despite others trying to define how we view Liverpool’s season ahead of the Champions League final, we will always define our own success…

Gauging where you are could depend on whether you’re currently staring at the Eiffel Tower or Liverpool St. John’s. It could be, like me, you’re still dwelling on what could’ve been in the red mist of last Sunday.

Regardless, Liverpool should be alive with the presence of the biggest game in club football. It is rightly an all-consuming beast, the European Cup final. There’s an opponent of relevance to the story, but no fairytale is written without peril.

This team will have to suffer on Saturday. For how long and with what lasting impact remains unknown. Madrid are bound by their own sense of kismet. They too have a history which demands a new chapter.

Two powerhouses, two bastions and two journeys who only have eyes on each other. The rest is noise.

But the rest want their twopence. They want to tell you success relies on this one. They’ll shout from 16th place houses about what defines our success. The state of it indeed.

Last Sunday was a lesson in a truth we all already know: that we’re not favoured. The reasons and logic are fair enough. If you define your football-supporting security by the amount of trophies your team has won, the last thing you want is the most successful club in the country to rack up anymore.

We have done it, I’m sure many of us still do. Manchester United still see Manchester City a million miles away from eclipsing 20 times. Many around the country simply view Liverpool as nauseating when it comes to success. Again, fair enough. We can’t control these things and nor should we wish to.

There are many things in which I’m at peace with when it comes to the anti-Liverpool agenda. One of the strongest lines I draw is that this team isn’t successful if it doesn’t win in Paris tomorrow. That going from four cups to two is a failure. That history won’t remember them.

A timespan of 105 games with fans in stadiums, some 9,450 minutes (I hope this is accurate) of football. Think of the journeys, of the goals and of the fist pumps. Think about them being tired and wanting to go to bed and give me your definition of success.

Alex Ferguson used to say you couldn’t lose more than six times in a season to win the Premier League, Liverpool have shattered that mold along with City. They’ve made it look feeble.

This season we’ve reconnected ourselves with the joy of cup football. Wembley adorned in red and accompanied by flags, smoke and establishment disdain. These are days we won’t forget. They’re another flag in the ground of a place in time.

This team wants success for its own legacy. We want it for them. That we weren’t able to win four cups on the verge of game 63 says everything about what this journey has given us. We’re seeing such riches on a weekly basis from Preston to Paris.

Let others define their version of what our success is. It’s a lonely place to be. Liverpool play for the big cup tomorrow on their rightful stage — the place so many can only imagine what it tastes like.

Whatever happens, this is part of a greater gift we’ve been given.

“I’m so excited to get into that fan park…Liverpool fans have enough practice in what to do in these European finals so we will have a party!”