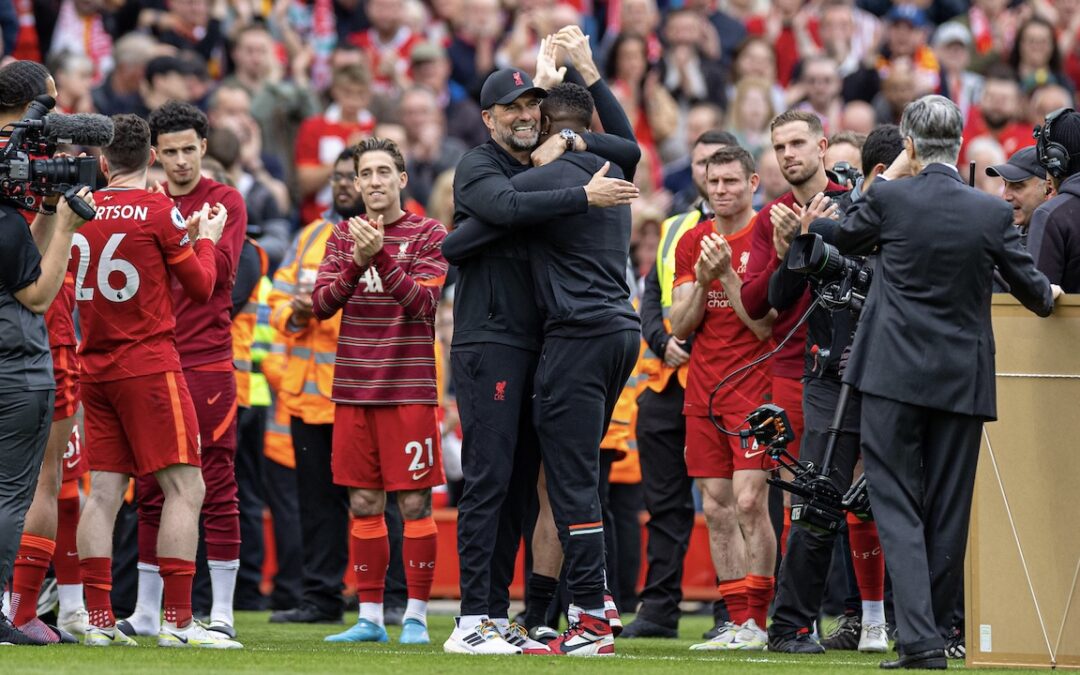 Neil Atkinson’s post-match review after Liverpool 3 Wolves 1 in the Premier League at Anfield, as The Reds fell just short in the title race…

LIVERPOOL stood up to be counted.

So too did Aston Villa.

Wolverhampton Wanderers stood up to be counted.

But, in the final reckoning, so too did Manchester City.

That becomes the defining force of the day and, truth be told, it always was going to be. If Manchester City did the business the league title was theirs.

I have seen none of their game, but aspects of it left us breathless today at Anfield. It’s one hell of a weird way to play football, but the essence of it is that Mo Salah thinks he has scored the goal that has won Liverpool the football league.

Liverpool weren’t very good today but they fought and survived and found their way when all the pressure of the world was on, when the football was, in their mind, at its weirdest.

It isn’t the same as a final. In a final you control your own destiny. You have your opponents to beat. Beat them, you lift the trophy. The idea of knowing, as an elite footballer, that there is this whole other thing you can’t control, you can’t even see, that is impacting the likelihood of you winning the trophy at your ground is odd. It is odder still when there are 55,000 maniacs losing their minds about said event while watching you.

But Liverpool perservered. They never quite hit the heights and Wolves played very well in patches, but they found a way at the exact moment when it seemed just possible they may not.

Wolves had a game plan and it was one I was into. A 5-3-2 is a good way to play against this Liverpool side and the lack of Virgil van Dijk meant that going two vs two at centre back could have increased mileage. Raul Jimenez and Pedro Neto gave Liverpool a torrid time and dovetailed marvellously for the opener.

Often in football we talk about running the channels as though the channels is a massive space. Against Liverpool that space is shrunk down, but prior to his injury Neto managed to pick the best specific channel over and over. Wide enough to get Joel Matip uncomfortable, narrow enough to be able to hurt Liverpool.

Jimenez was excellent all game, the best I have seen him this season. Ibrahima Konate found it exceptionally difficult, having his wobbliest game of the season, perhaps because of Jimenez, perhaps the circumstances, perhaps a combination of both.

With an eye on next week, losing Thiago Alcantara was a blow but it was a blow for this game too. The manager lost a sub and Liverpool lost a little control. It wasn’t that James Milner or Naby Keita played poorly but the extra nudge of Alcantara would have helped second half.

Jordan Henderson was good, present and helpful to his centre halves on the whole but he felt he had to force the issue a little too much.

The finishing of Sadio Mane was a real boost: one counted, another didn’t and Mo netting when the pressure was on is excellent with an eye on next week. Andy Robertson scrambled the ball home brilliantly and his relentlessness was a key feature of the display. You’d follow him to the very jaws of hell.

But eyes on next week are all well and good. There was today broiling away in a city that felt frisky, that wanted to explode. It hurts not to be champions because they deserve to be champions, but so this season do Manchester City. Breaking 90 points is remarkable and both sides have managed it again. There is a standard being set which is world-leading.

Liverpool have put in three seasons worthy of being league champions across the last four seasons, but only have one title to show for it. That hurts, obviously it does, but next week is an opportunity to nail on that world-leading standard in front of the world. Next week there is an opportunity to take the biggest trophy in world football to add to the two already in the bank.

Let it hurt. Watch it hurt. Let it scab over and feel every twinge. That’s fine because we start again on August 6 trying to win this again and we will be there throughout.

Post mortems when the season is dead. Ours remains alive in the most glorious way possible. One more big push next Saturday. The European Cup is not going to win itself.

Liverpool will one last time for this campaign stand up to be counted and this time they can control every aspect.

“I thought it was fitting that the title went into the last 15 minutes of the season because this teams deserves that. Let’s go win the European Cup next week!”