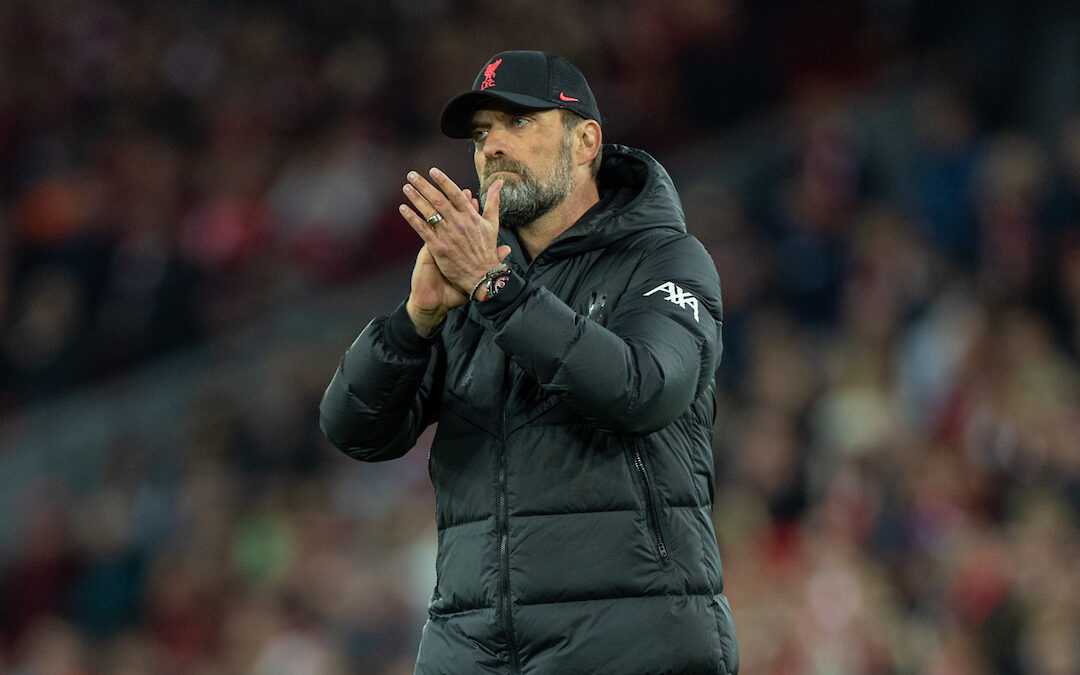 Neil Atkinson’s post-match review after Liverpool 1 Tottenham Hotspur 1 in the Premier League at Anfield, as human error creeps in…

Saturday night all primed for action, ready to dance on many dancefloors and then Liverpool drop points. They drop points and they shatter on the floor. Here I am, all dressed up with nowhere to go.

But I’ll go anyway. You should come. Because while Liverpool weren’t great when they got 23 yards from goal, while Liverpool don’t get what we all needed, while it isn’t great, they are actually quite good. I’ve had nights ruined by many a Liverpool side; I’ve let them ruin my night and I’ve ruined other people’s from there.

Not these boys and not tonight and not off a performance like that. Not this season. Not this May. No nights in May should ever be ruined because the very potential of it means there has been excellence.

However, there will be things to take. What is the difference between:

a) A clipped ball into the box;
b) A pass into the area;
c) A cross flung in?

It’s a fine line on all three, but Liverpool began to do too many which would err into the category of C. That third category was something Spurs wanted to see from Liverpool. They end the game with four centre backs on the pitch and three centre mids. They want the ball lashed in. Don’t give them what they want.

Tottenham were good at what they wanted to do. There is a chat about how far that can take a side but then there is also a chat about the gulf between Liverpool, Manchester City and almost everyone else playing the game. It isn’t a chat had often enough really and that completely validates Tottenham’s approach. You know what else validates Tottenham’s approach? They’ve played Liverpool and City four times and not lost once. Consider yourselves validated.

The next problem with all of that though, for Liverpool, is that Tottenham’s approach is one taken to some extent by sides such as Watford but Tottenham have far better players. Far, far better. Son Heung-Min is a delight of a footballer. He is so bright and capable, sharp as a tack. Harry Kane is a genuine 9.5 and enjoys playing as much as scoring these days. This gives them an edge which means they can have 10 yards between a back five and a midfield four and 10 more yards again to the 9.5, but have everyone know they carry threat at all stages.

Liverpool have to cater for it. They have to allow for the possibility of getting hurt while looking to prosper and this means that Liverpool do not approach it as they would a Watford and nor should they.

What Liverpool have is a Luis Diaz. He is electrifying at the moment. He gets the deflected goal but his performance is just relentless. Relentless in quality, energy, speed and desire. He is relentlessly making up for lost time, relentlessly relishing every moment and every challenge. He is remarkable.

Mo Salah has hard lines. He is constantly in the game and I would actually like him in the game a tiny bit more. Liverpool should find him at every opportunity but instead they starting clipping/crossing. Both Ben Davies and Ryan Sessegnon end up booked trying to deal with Salah.

I don’t think it is Trent Alexander-Arnold or Andy Robertson’s night but that is allowed. I don’t think Diogo Jota makes much of an impact when he comes on. I think Naby Keita makes sense but I also think our manager may have thought longer would be added on.

But it wasn’t and Liverpool couldn’t make enough of the time that was. This is football. What Liverpool have done since Stamford Bridge is exceptional, and today, for the first time in one of these run-ins there is some human error.

There may be more. Manchester City will be boosted by today but god knows they need a boost. They look shattered. We don’t but perhaps today we lacked a little mental sharpness. They can drop points. Human error has been introduced. They may not and we have two cup finals to enjoy instead. But they have the boost and we need to all swallow that.

It could still be as great as it gets.

“It’s disappointing. Spurs came and did exactly what they wanted to do. I thought it was a mistake not rotating more. I would’ve brought in more fresh legs.”