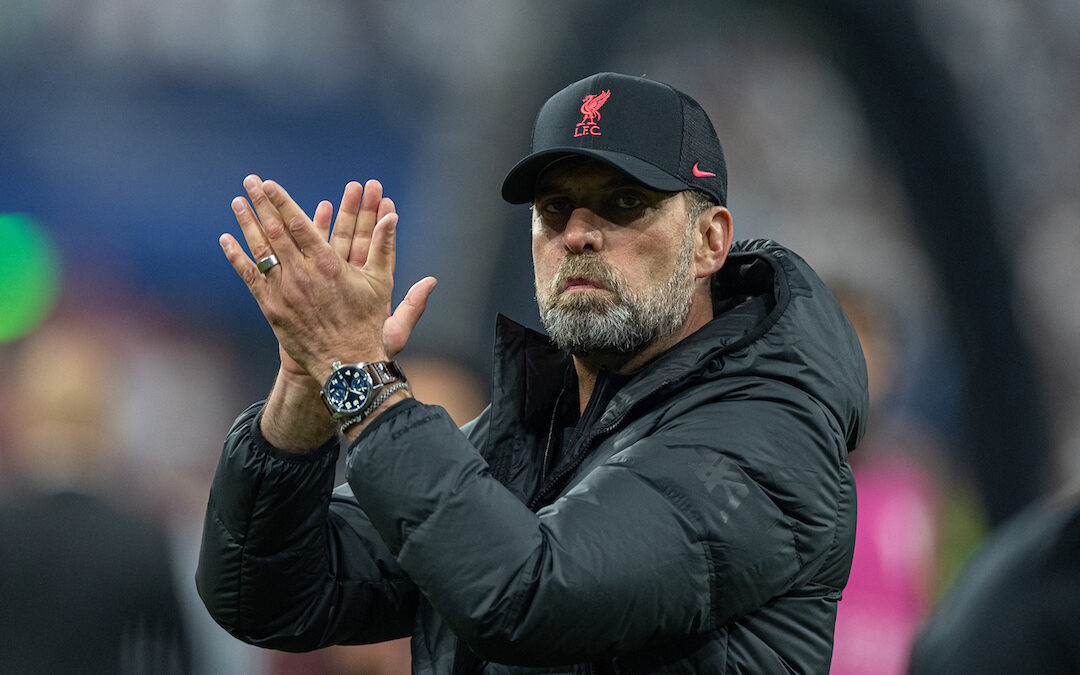 The players almost didn’t seem to want to look at us for an age. Like they’d let us down.

As if they could let us down.

We’ll have none of that nonsense here, thank you very much. Today, regardless, I wanted them to win for them first and foremost. I’d had my fun, my fill. After all those games, all that tension, all these marvellous moments I’d have loved one more, celebrated one more but ultimately I want them to have all the medals. We get all the other stuff.

All the other stuff? Well, today we will get to that, but on the whole all the other stuff is the best bits. But this season I wanted them to have one of the big two in their back pockets to swan off into the summer with. They should have cabinets packed with silverware.

Further, there is a chance these lads who have been so magnificent for so long, may never again share a dressing room. I wanted them to have one more last hurrah, a valedictory dance.

But it wasn’t to be. Instead after all those games Liverpool don’t quite manage to get their crowning glory.

Fair play to Real Madrid. They did themselves proud and lift the thing as worthy champions. They had a nightmarish run which they turned into the stuff of dreams. They nailed moments and finals are so often about moments.

And yet it stings. Liverpool were the better side for the first half without making it count. And in the second they end up with the ball in the Real Madrid penalty area an awful lot. Thibaut Courtois is pressed repeatedly into service and across the 90 he makes three magnificent saves from Sadio Mane, Mo Salah and Diogo Jota. The cup in the end is his.

Those saves aren’t the frustration. The frustration is the chances that aren’t made, the touches not taken and, yes, the hard lines had. At times the ball could go anywhere in the Real Madrid area and most of the time it stays with them.

This happens, it happens a lot but when it happens in a final, it hurts.

But today, because of all the other stuff, it didn’t hurt a great deal. It felt, at times, as though the game was happening through a goldfish bowl because of what went on around the game before and, as it was to transpire, afterwards.

It was an appallingly organised game of football and the people responsible for organising it should be ashamed of themselves. They should be looking in the mirror. They won’t be. Instead they will be spending the time that could be spent with a proper review disseminating lies to cover their own back and they will be aided and abetted in that by many in the football media seemingly and certainly by opposition supporters hellbent on adding another to the Liverpudlian charge sheet.

What’s striking though is how much of the football media simultaneously, immediately struck back on social media — journalists covering the game who had anticipated there being problems and others who were having to live it in person, just there as a punter.

I got off a train at a station that was about a 15 minutes from the ground at about quarter past six; the game kicked off at nine. We were held twice, I have no idea or theory as to why, and then bottlenecked under a bridge for what we presumed were ticket checks.

When we got to the checkpoint two things were remarkable — how few checkpoints there were and how few stewards there were to do it, and the fact they had simply stopped.

I was alright-ish getting in; it was a bit mad and fraught especially after the bottleneck but others weren’t as fortunate before or after and you worried for them, of course you did.

After is the tell as to how much of this is the authorities’s problem. It was horrendous trying to get away from the ground made worse due to some pretty horrible policing. This cannot be blamed on late supporters or fake tickets but nonsense stories don’t cook themselves up.

There will be more on this in a lot of different areas and hopefully the club retain their early strong stance. It is depressing though to see both the tribalism and the reliance on authority kick in. Broadcasters have a responsibility to be better in the first instance.

What had been a fabulous day in the fan park became a miserable one around the ground and on the pitch but in our psyche let us split them, treat them like two days.

There has been an enormous amount of life recently and that is to Liverpool’s credit. They’ve given us their brilliance and it has led to all this. It just isn’t asking much to be treated better, to be catered for as paying guests rather than policed as a constant problem.

Leaving France, Liverpool can do no wrong, Real Madrid and their supporters should have a marvellous evening, but the facilities and the treatment should match what is on display on the pitch so it isn’t watched through a goldfish bowl. Things need to change. We can’t have this again though we want to have it every year. That, there, is Jurgen Klopp’s job and he has done his bit brilliantly. Now the authorities need to step up. Simply taking responsibility for the safety and wellbeing of the paying customers would be a start.

This is my last one of these this season. I’ll still be doing the emails and we can debrief through there. But it has been a pleasure as ever. I pick a lot of people’s brains and steal ideas within these, you know. Those people know who they are and thanks to them. Josh edits almost all of them too so thanks to him. He is a marvel, tonight more than ever.

But thanks to you all. I take some risks, some chances, but I wouldn’t feel comfortable doing that if you weren’t open minded enough, if you weren’t prepared to let this pretentious rubbish so often just be exactly that.

We’ll be back together for a new season. Shankly’s ever-flowing river. The together bit is always the most important.