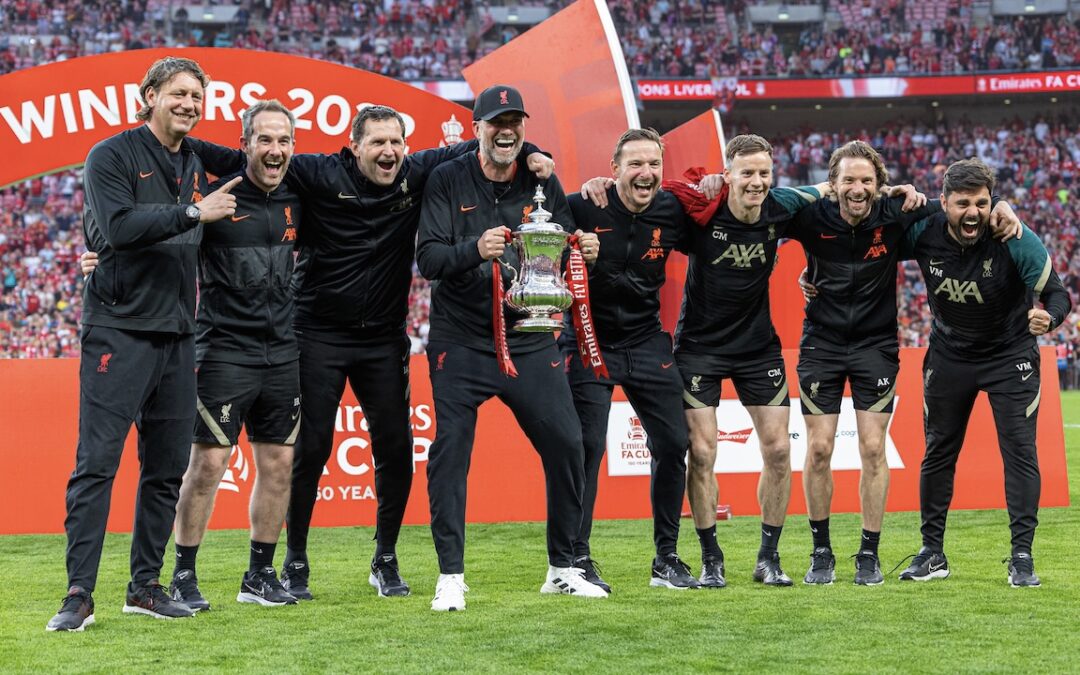 The last time we won the FA Cup, we won on penalties. We won the League Cup on penalties. Winning by tiny margins is a thing this club does. Scooping every ounce of luck and hard work out of teams and laying it out on the pitch.

But even more, Liverpool win a battle against exhaustion.

Legs are run out and brains must be utterly washed out.

When we get there, there is barely any adrenaline left as the second half of extra time grinds on, but Liverpool find a way to get back on top. The game has ebbed and flowed for two hours, but here come Liverpool. At the death, it is us who look like scoring, not Chelsea, just as it has been for all the match.

Chelsea were on top for the first eight minutes of the second half and the first period of extra time. Apart from that everything that mattered was Liverpudlian.

But they don’t score. They should. And so the depths of resolve discovered when they should have won and won and won again — physical and mental — determines Liverpool’s fate.

There are so many examples, the Sadio Mane penalty being the final one. They should have won it and won it and won it. And then there is Sadio. And they shrug. And just win it again. Finally. When Alisson saves and Kostas Tsimikas converts.

You have to wonder what is going through the manager’s mind at times. Before the game, he must have poured over analysis. Can Andy Robertson keep going? Who else’s legs might give way and when?

He, by and large, gets all the big calls right. The team defends solidly throughout and holds a better line than we have seen in the last few games in the league. Trent Alexander-Arnold is brilliant, his form is suddenly there when we need it. Liverpool blaze out of the traps and dominate in the opening minutes.

Meanwhile, at the other end of the pitch Luis Diaz gives Chalobah and Chelsea’s defense the run around. Salah is being sat on as usual but the front three are still weaving about making plays and taking their chances. They have improved since last Saturday but still nothing falls quite right. The first half is frustrating but no one is letting the side down, instead lines were hard rather than fluffed.

But with the advent of the second half, time starts to take its toll. Balls become longer, runs become slower. And yet they find a way to hurt Chelsea over and over, to pin them back. We hit both posts. Diaz has another shape just wide with Mendy critically concerned. It doesn’t come but Liverpool know it will.

Their battle is as much with legs. Tired legs. A long season this.

Improbably, James Milner — the oldest man ever to kick a ball — comes on. Liverpool’s temperament and experience in these games comes through and we are all staring it in the face: penalties.

We have been here before. We have been here again. Penalties. It’s what we do. Something does feel different this time. Not least one of our leading goalscorers and wonder of the world Mo Salah being sat on the bench. And that the last time (just a couple of months ago) when we faced these fellas in a shootout they made some wild choices around last-minute keeper changes and so on. This time, they are dressed in all-meaningful yellow. They have learnt lessons. They are primed. Ready to go. We lose the toss and lose the toss. Has our winning streak from the penalty spot come to a grinding halt? It seems possible.

But no. It was ours. The day was always ours, as the year was, as we knew from day one, as we knew when part of you pours out in these lines from time to time.

“GET INNNNNNNN! How fucking good was that eh? Liverpool FA Cup winners 2022!” 🔴