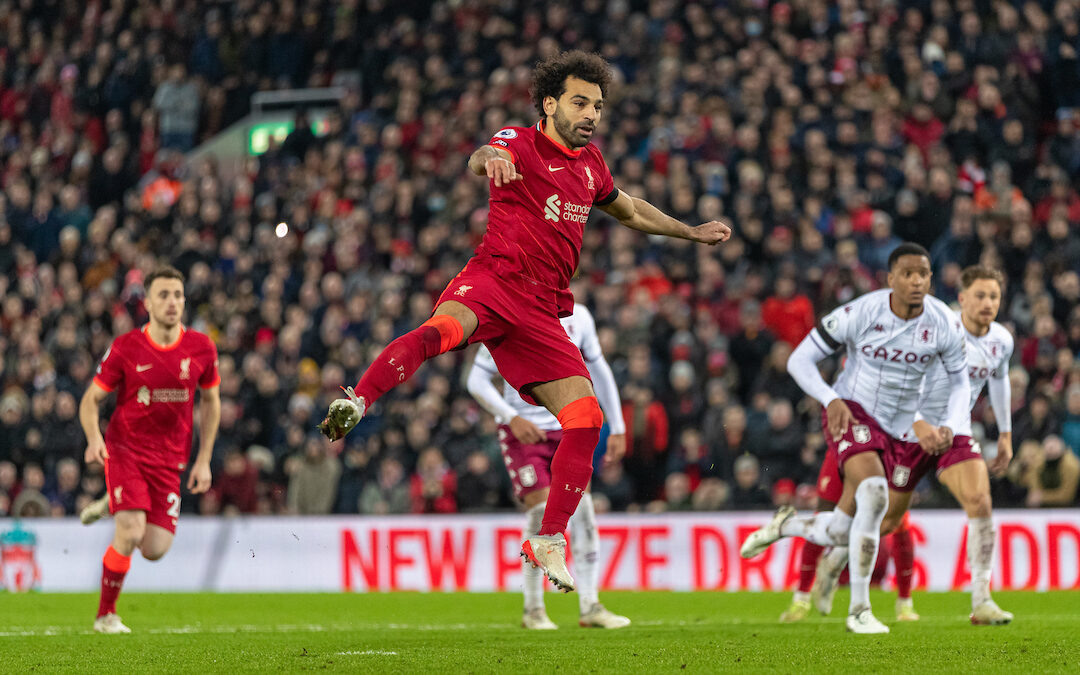 Match preview ahead of Aston Villa v Liverpool in the Premier League at Villa Park, as The Reds retain hopes of the title…

LET’S not behave like it’s a funeral when we’re in the midst of what should be a month-long party.

Perhaps it’s the eternal optimist in me, but if you don’t believe we’re still in this title race, I wouldn’t recommend reading any further.

Dropping points felt strangely impossible, yet simultaneously inevitable at some stage, but perhaps more frustrating on Saturday night was that a Liverpool team that relentlessly knows how to find a way wasn’t able to.

A group of players usually so adept at making smart decisions under pressure found it difficult to break through. Many combinations were entered, but the door was impossible to unlock.

We left Anfield with one point rather than three. Granted the odds have edged against us, but let’s not pretend we haven’t defied the odds numerous times before. The power of perspective is important here, as the manager made abundantly clear yesterday: “As human beings it’s really cool, we can decide by ourselves how we see it.”

The task for the team remains the same: win all your games and see where that leaves you come the end of the season. With three games left and nine points up for grabs, of course we can throw in the towel, or we can decide the chase continues. I know which camp I’d rather be in.

And so the chase continues tonight against an Aston Villa side that has started to find a bit of form after a tough period. It’s a game where all sentimentality will be left to the side, and the familiar faces on the pitch will provide some of the greatest threats.

New faces have also entered the fold from the team that hurt us seven times last season, but all of that is now firmly in the past. In the present, the focus will be putting pressure on a Manchester City side travelling to Wolves on Wednesday night.

Like perspective, opinions are individual, and there seems to be a lot of differing ones when it comes to team selection for this game. Perhaps it’s the nature of everything being up for grabs, but it is more important than ever for Klopp to get the balance between freshness, momentum and rest right.

With Joel Matip and Virgil Van Dijk all but guaranteed to start tonight, the conversation gets interesting when it comes to the full backs. Physical fatigue looked less of a problem than mental fatigue at the weekend, and bringing Kostas Tsimikas on towards the end hints that we might see his name when the team drops.

Players are allowed to have off days, but it’s important to remind ourselves that Trent Alexander-Arnold really doesn’t have many of them. Two in a row feels unlikely.

Midfield is the most up in the air for this one, but Naby Keita should regain a starting spot after a game on the sidelines, alongside Jordan Henderson and Fabinho in the holding position. With a lack of impact from the bench against Tottenham, Thiago Alcantara will be ready and waiting should he be called upon.

Before we go any further, can we all take a moment for Luis Diaz? I am left in awe every time I watch him play, and leaving him on the bench is now becoming harder to justify with each passing game. He’ll stretch the pitch on the left, leaving space for Diogo Jota to make an impact in the middle of the park.

The return of Roberto Firmino to the bench will provide a huge boost, and please, let’s never underestimate Mo Salah.

Are the whole country supporting us? Unlikely. Can we make as much noise as possible in the away end at Villa Park and in bars and houses across the country and beyond? Absolutely.

Anything can happen, and it’s all just a matter of perspective anyway.

“I’d look to bring Jota in, I just have this feeling this one’s for him. Mainly because I think they’ll be very aggressive with Diaz.”