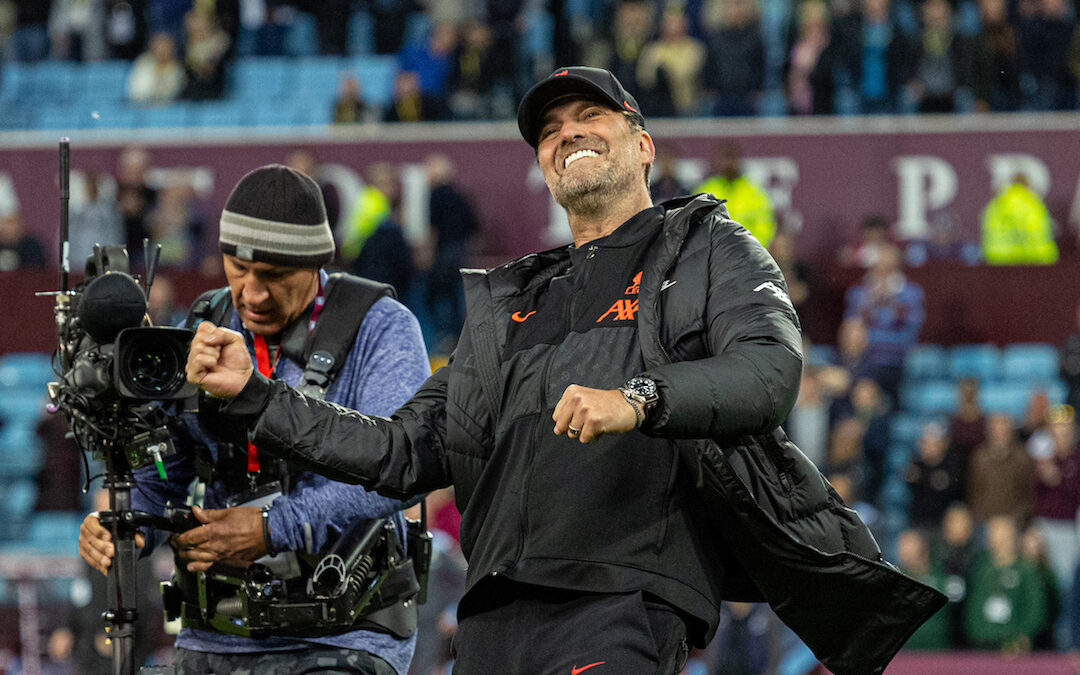 THE relief was palpable.

Three times. The relief couldn’t have been better timed either. On all three occasions. The relief was the relief of staying alive, of escaping the abyss, of saying not today. Not today. Three times.

It wasn’t a classic performance. There were hints one could break out. Liverpool from just after 10 minutes to about 20 looked like getting in over and over. Second half there were hints of a third Liverpool goal and that may have drained Aston Villa legs to the extent there could have been more.

But when it didn’t come there were no heights to hit just points to pocket against a side who were determined to do the business on the big stage, on the big screen.

I liked them. I mean, I hated them. But I liked them. They were bold and had a plan to attack Liverpool which didn’t mitigate obvious defensive weaknesses and left them open. They also did the trick we are seeing more and more of breaking Liverpool’s rhythm with spoiling tactics. This is a reality we need to cope with from minute one.

Liverpool made a number of changes and the performance was disjointed but the individual performances themselves weren’t that bad. Fabinho seemed to find the going tough before the injury. Kostas Tsimikas grafted very hard but just lacks Andy Robertson’s raw physicality and pace. Diogo Jota grew into the game and showed in the second half the player he can be. He is brilliant for the winner.

Matip is very much at the scene of the crime for their goal but from there gets one back and wins his battles more and more as it wears on. By the end he has seen everyone off.

Alisson Becker shows repeatedly why he is the best in the world and the best for us. He makes mistakes and shrugs them off, he stands so strong and so intimidatory of every forward who gets near him.

Virgil van Dijk had one of those games where he was emphatically pressed into service and it was a pleasure to see. When he does actual defending he shows how marvellous he truly is.

And Henderson bounces through the game. He finds moments for key interventions and recovers the ball well. The game suits him there at the moment. He can see the pitch and when to stay and go. There is, given events, every chance he starts the cup final there and he’ll be more than fine.

In attack, Luis Diaz again creates some great moments and is integral to the winner. He is playing ever so well. But a Sadio Mane headed winner feels epic, the further we get away from the final whistle the more epic it feels, the more it feels like a thing. Sadio Mane scores headers. Liverpool win stuff.

Win stuff. Survive. Stay the course. The course being take it all the way, get to the end of the campaign with only wins. Wins beget wins and the relief can become much, much more. I’d quite like the 90 seconds after the Douglas Luiz goal to be the worst 90 seconds in May.

We drive back to Liverpool and yet again everything remains possible which is as close to the impossible as anyone has ever managed.

We are nearly there and wherever there is we will get there together and get there intact.

Relief? Yep. But relief because there remains the possibility of the greatest joy.

That’ll do for me.

“The relief is tangible… The joy hasn’t even hit yet! It’s not about the performance, it’s about the result, and Liverpool found a way!”