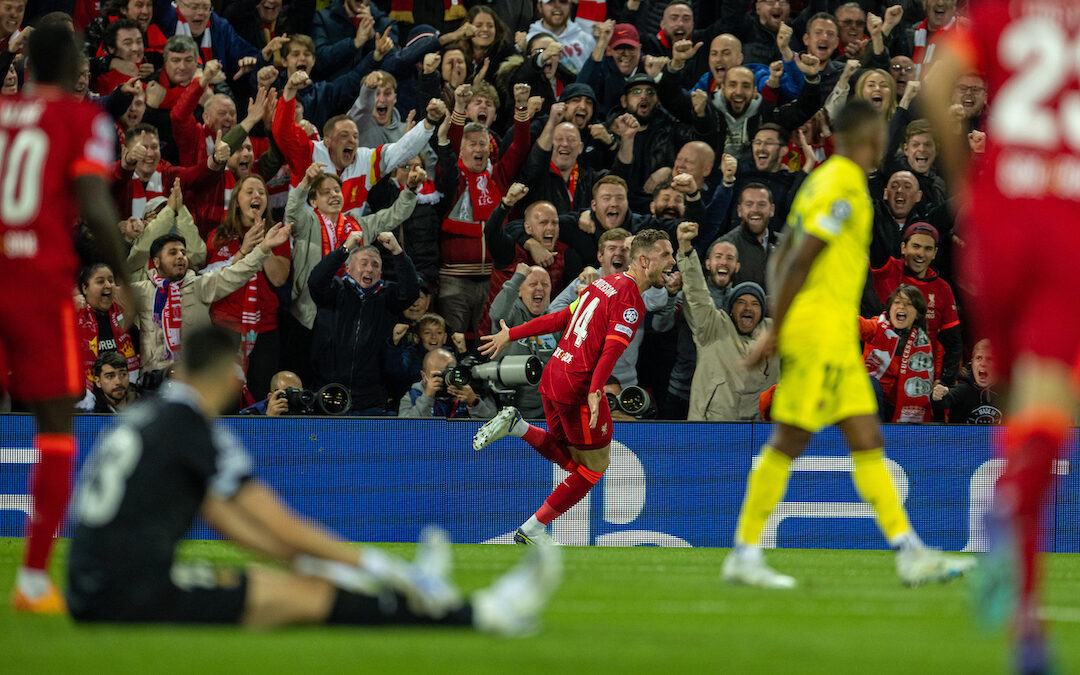 And how short of cutting edge our opponents are. This isn’t complacency. It is the truth of the matter. Second half they get one corner which comes about because the ball ricochets off Fabinho 35 yards from goal.

The first half was fascinating, in that Villarreal did pretty well but Liverpool felt always a moment of quality away. In the end what did it wasn’t quality, insofar as asking sides to defend over and over isn’t an example of that. It was, though, fortuitous that the ball deflected off the Jordan Henderson cross and ended in the back of the net.

I enjoyed Henderson’s whole performance. First half some may find him difficult to love, but he is constantly running to create space, to make the pitch big, to stretch the centre backs and be one more. It’s strange with Henderson, how off the ball he constantly involved in or out of possession.

Second half Fabinho was fantastic. The amount of pitch he patrolled and launched Liverpool attacks from was enormous. The game belonged to him, it sat in the palm of his hand. It was a complete performance. He was the game’s outstanding player and grew stronger and stronger as it wore on.

Thiago Alcantara again astounded in moments. It wasn’t his FA Cup semi final performance but it didn’t need to be. He helped the other two ultimately dominate proceedings.

It still needed that moment of class to go with the threat and Sadio Mane supplied the touch and run to go with Mo Salah’s patience. It’s a lovely goal, a comic book goal.

At the back Ibrahima Konate and Virgil van Dijk yet again showed a set of forwards how irrelevant their attempts could be. It is truly dispiriting stuff.

Trent Alexander-Arnold played in his third Champions League semi final. He has won his other two. He may well play in eight more and that is something to factor in while watching all of this side — how comfortable they are at this level, at this depth. They have their sea legs all the time and they are arguably the first Liverpool side not captained by Phil Thompson or Graeme Souness you can say that of.

Nothing is done and they would hate that talk, but they spend the last 20 daring Villarreal to just try it, to just show what you have. It may be different next week in Spain but we need to hope it isn’t, because if it isn’t then another two-goal margin beckons whether Liverpool need it or not.

They’d need to find some cutting edge and us lose ours. They’d need to keep it drab for an age. They need hope and Liverpool can take that away from them. If this is their fairytale then we can be the baddest of wolves.

We’re excellent and we can win four trophies or just one. However, we are close to taking the season and its joy, hope and belief to the final final day.

Liverpool are up for the lot and so are we.

“To a man, Liverpool were excellent tonight. They had to be so patient first half and then the second half was just a red whirlwind. It was another masterclass from Thiago.”