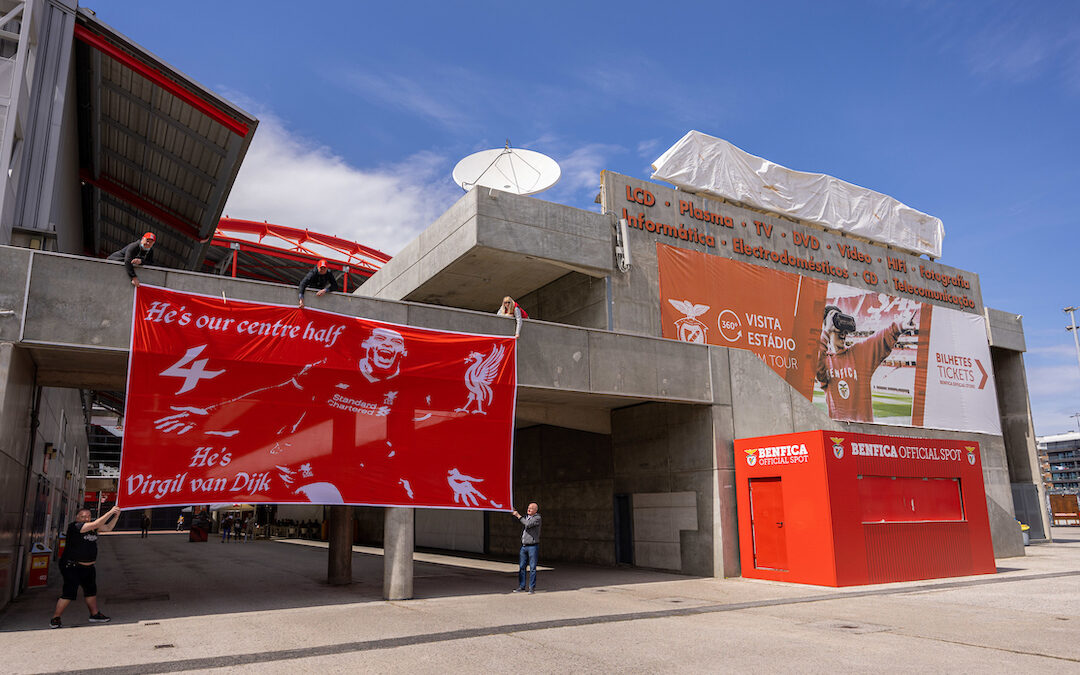 The big match preview from Lisbon ahead of S.L. Benfica v Liverpool in the Champions League quarter final first leg at the Estadio Da Luz…

It’s a Monday night in Lisbon, and as the clubs and bars shut for the day, suddenly you realise you’re surrounded by Liverpool fans. The streets start to fill and with everyone singing there’s a certain buzz about the city that is hard to describe. There is simply a sense that something big is on the horizon.

And something big is on the horizon indeed, as tonight we face Benfica in the quarter finals of the Champions League. You didn’t need me to tell you that, but sometimes it’s just nice to remind ourselves of the days and nights we get to have with this football team.

“It’s the situation we dreamed of,” said Jurgen Klopp in his pre-match press conference. As he reiterated how we as fans should be enjoying the journey, I cast my mind back to this time last year and two years ago when watching the match in a mate’s garden was the most exciting prospect in the world.

Whether you’re making the trip over to Lisbon, looking forward to the home leg at Anfield, watching in a pub or sitting in your front room, take a moment to dream of what could be for just a second.

While we get the chance to dream, for the players it’s business as usual. The manager hinted at some of the challenges and threats Benfica pose, with a mix of technical players, pace and organisation creating an attacking team capable of hurting the opposition.

Benfica are used to being the underdogs in the Champions League this season, and have momentum on their side scoring in every game since the turn of the year. They’re yet to face Virgil van Dijk and Alisson Becker, though, who are all but certain to start tonight alongside Andy Robertson on the left.

Kept on the bench against Watford, Trent Alexander-Arnold should retake his position on the right, and Ibrahima Konate could start yet another big game against physical attackers to allow Joel Matip to rest before a big weekend.

With a full squad available and Naby Keita back in the side, there are big decisions to be made in midfield. Five days before facing Manchester City is an ideal gap when considering rhythm and freshness and, after starting on the bench against Watford, Fabinho will come back in from the start.

Thiago Alcantara once again left us in awe at Anfield with his passing ability, so I expect him to begin the game and Naby Keita to come on later as Klopp makes use of having five substitutions. Captain Jordan Henderson will complete the trusted trio.

“He tried for 10 minutes, but I couldn’t understand a word,” laughed Klopp when asked if Diaz had given him any insight on Benfica. He won’t get lost in translation on the pitch, though, and with good knowledge of the league and opposition Diaz will surely be one of the first names on the teamsheet.

With the minutes split between Mane and Salah on Saturday, I’d back them to complete the lineup. The bench will genuinely make my eyes water.

As one of the incredibly fortunate few lucky enough to take my place in the Estadio da Luz tonight, rest assured I will be taking a moment to dream. About the 90 minutes ahead, about all the games to come in April, about what we could be celebrating at the end of May.

Wherever in the world you are watching, take a moment to do the same.

“We’re in Lisbon! It’s a beautiful city, the atmosphere is really building. Benfica are a good team, but you back the reds to come away with a good result tonight.”